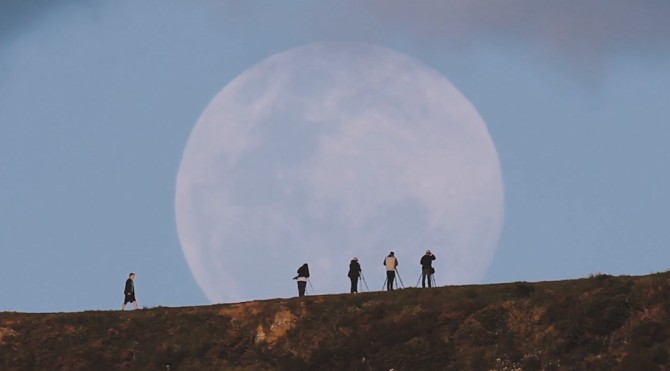 In order not to miss the actual super moon itself, Mark made the movie one day prior to the Super Moon day, but that had very little impact on how the moon looks like in the movie.

The movie shows a gorgeous shot of the moon rising with several photographers gathering up to photograph the events. It starts with the photographers arriving at the scene, unloading their gear, doing their thing and finally tearing up. This entire 2 minutes scene is happening in front of the most gorgeous moon you’ve ever laid eyes on.

Following the simple rule of Big Lens = Big Moon, Mark shot this movie with a 600mm lens and a 1.4x extender (which equates to using a 840mm lens), standing about 1.5km away from the photographers and directing them via a walkie talkie.

If you are interested in learning how to shoot the moon, Mark has a great tutorial on the subject, going from gear through composition, camera settings and planning. Mark heavily uses PhotoPills to plan his shoots, and nail the location where both a top of a mountain and the moon are in the same frame.

How to photograph a wedding – Tips for professional photographers or anyone thinking about trying this!

« How I Created This Dark Themed Belgian Medieval Photograph
In A World Full Of Digital Cameras, Are Vintage Lenses Still Useful? »