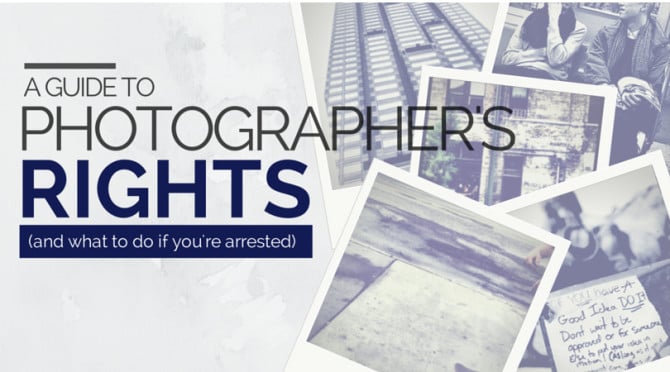 Hopefully, none of you will ever actually be in a situation where this would be useful, but Mickey Osterreicher, General Counsel for The National Press Photographers Association (NPPA), sat down to make a quick, but helpful, informational video regarding the legal rights of photojournalists. In the video, which is a 3 minute long gem of a sound bite, Osterreicher, explains several different scenarios photographers working in public places often find themselves in and what they can do to prevent interactions with the police from escalating.

Given recent situations regarding the possible violations of photographer’s rights in Ferguson, Missouri and other demonstrations around the country, the video is certainly worth taking a look at.

What You Need To Know

The First Amendment does help protect photographers and grant them certain rights, but it does have it’s limitations.

If your images are deleted, Osterreicher says not only has your first amendment right been violated, but it is also an illegal search and seizure under the 4th amendment and a violation of the 14th amendment citing personal property was taken without due process. To that end, Osterreicher warns, “The problem is they have a badge, they have a gun, at the end of the day if you push it, you’re probably going to lose the argument.”

What You Can And Should Do

One of the main points Osterreicher stresses is to stay calm. Don’t start yelling, don’t get angry or irrate, it will only increase the chances of arrest. Don’t automatically assume the worst of police officers and, by all means, don’t provoke them into showing you their worst. Remember, police officers have a job to do and it is ultimately to serve and protect the public, don’t do anything that prevents them from doing their job, even if they are preventing you from doing yours. No, it’s not “fair”, but in most cases, this will only make matters worse.

When you’re out there shooting, you’re not only representing the organization you’re shooting for, but you’re also an ambassador for the photojournalist community as whole. This includes freelancers and citizen reporters. Your actions, whatever they may be, will be a reflection of how the public and law officials will view all photographers. Just be cool and make rational decisions.

On a final note, it should be pointed out that the video is geared towards photojournalists working in the United States. Those working outside of the USA should fully familiarize themselves with any local regulations, rules, and cultural standards regarding photographing in public places.

« No, You Can Not Patent “Sorting And Uploading Photos For Athletes To Download”
Dancers Bare It All In Streets Of NYC For Striking Portrait Series: Dancers After Dark [NSFW] »