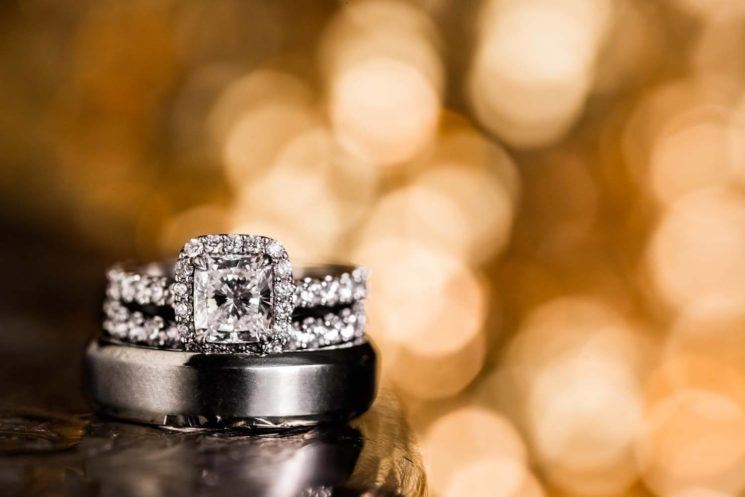 Weddings happen in a whole variety of different locations. Not all of them are as pretty as others. Sure, it’s nice to be shooting in a glorious venue, but sometimes you’re stuck in a boring grey room. This can make things tricky for shooting detail shots like the wedding rings. But there are ways to get pretty fantastic ring shots, even in the dullest of environments.

Texas based wedding photographer Ammar Selo has solved the problem of dull venues by bringing his own set and props. With them, he can create beautifully coloured backgrounds, and a much more pleasing result. When we saw his work come past our screens, DIYP decided to get in touch with Ammar to find out how he does it.

Wedding rings are just one small detail of a wedding. But they are an important one, and certainly important for Ammar to capture. We asked him to tell us a little about his process with the rings.

I have always loved wedding ring shots because they show the rings in a much bigger scale than what the naked human eye can see.

I found that choosing to shoot the rings during reception dinner works all the time for me. The whole process takes around 10 to 15 minutes, which gives me time to get something eat before the next action starts.

10-15 minutes might sound like a long time for a “quick ring shot”, at first. But doing it when nothing else is going on means you can take your time and get things just right. But, 10-15 minutes really isn’t a lot of time for what is essentially a product photo. If you were shooting rings for a jeweller or catalogue, you’d often spend much longer getting everything set up just perfectly.

In order for me to execute this shot quickly and efficiently, I had to create a system that will work in all situations. I don’t always shoot in nice locations or have great props or surfaces to shoot with, so I figured I would bring my own props and keep in my bag all the time. 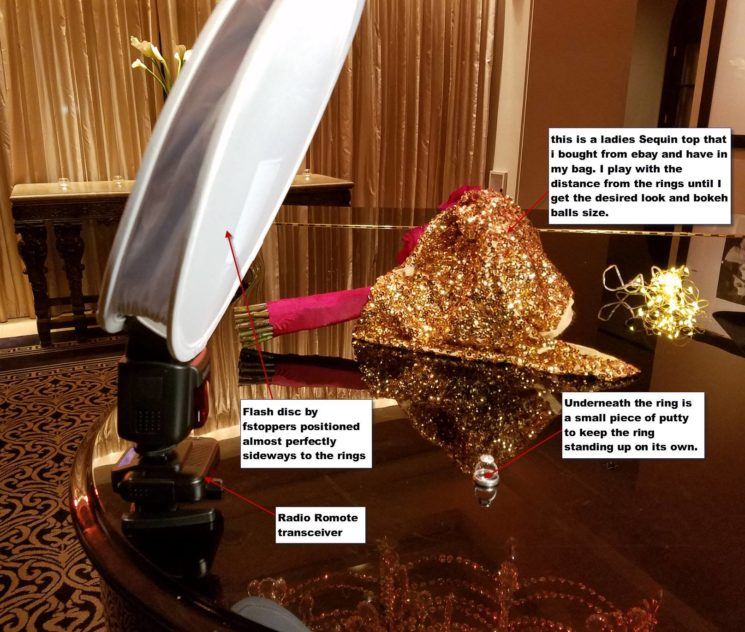 For the background of the shot, Ammar uses a piece of golf sequin fabric that was cut from a ladies shirt. Don’t worry, he didn’t just chase after somebody with a pair of scissors. He bought one specifically for this purpose. To shoot the images, Ammar uses a Canon 5D Mark III with a Canon 100mm f/2.8 IS L Macro lens. While he says that the camera body used really isn’t important, the macro lens is key to achieving the shot.

I shoot in manual mode. Aperture f/8 to get most of the large stone in focus. ISO2000, because this is the setting I use during the reception, 1/200th of a second shutter speed with the flash set to manual at 1/16th power.

Keeping the ISO high might seem a little odd. But, not changing means you’re less likely to forget to raise it again when you’re done. Most modern DSLRs also don’t really have a problem shooting ISO2000 these days, especially when you have plenty of light from a flash.

The flash used is a Godox V860 speedlight, fired by Cactus V6 triggers. On the flash, he uses the FS FlashDisc as his modifier. While this is quite a small modifier, compared to the size of the rings, it’s huge. Having a light source this size also means more of the sequins are lit behind the rings. 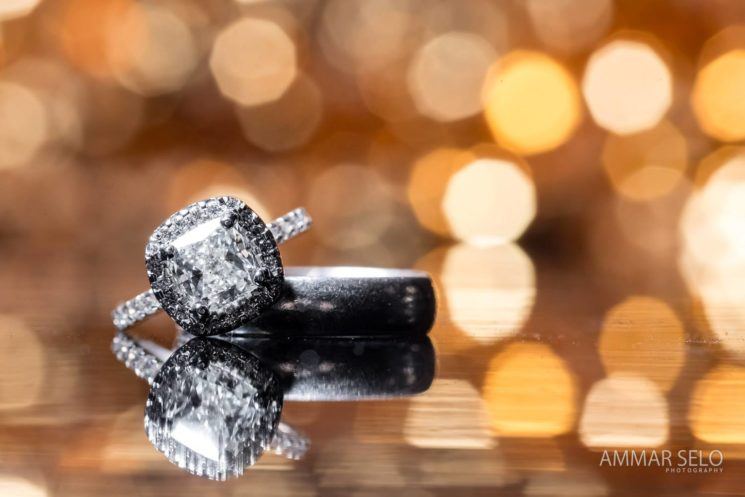 Ammar starts by placing the flash directly to the side of the rings. He has found that this provides him with the best result to show both highlights, reflections and shadows on the rings, to help provide form and shape. He says that this works almost all of the time without further tweaking.

Distance of background to the rings plays a MAJOR role in how big the bokeh balls appear. If I wanted to achieve bigger balls, I just need to push the background further away.

For these particular shots, Ammar says he got lucky with his location, and what he could use as a surface upon which to place the rings.

I was lucky enough to find a nice grand piano that I used as a reflective surface to place the rings on, but I have successfully used night stands with dark surfaces, mirrors, and large smart phones to achieve very similar results. I also have couple of reflective metallic looking sheets that I purchased from Walmart for this purpose.

I have noticed that the closer the lens to the surface, the better the image will be in general. The surface will also appear much smoother and reflective.

This is due to something called Fresnel reflection (which is different to Fresnel lenses). You can see the same thing with a calm lake on a sunny day. If you’re standing at the edge looking across the lake, you can often see a perfect reflection of the sky. If you look straight down and the water is clear, you’ll see the surface of the ground through the water.

Ammar also keeps some putty in his bag at all times. For standing ring shots, he finds this is an essential tool, as rings will often fall over without it. 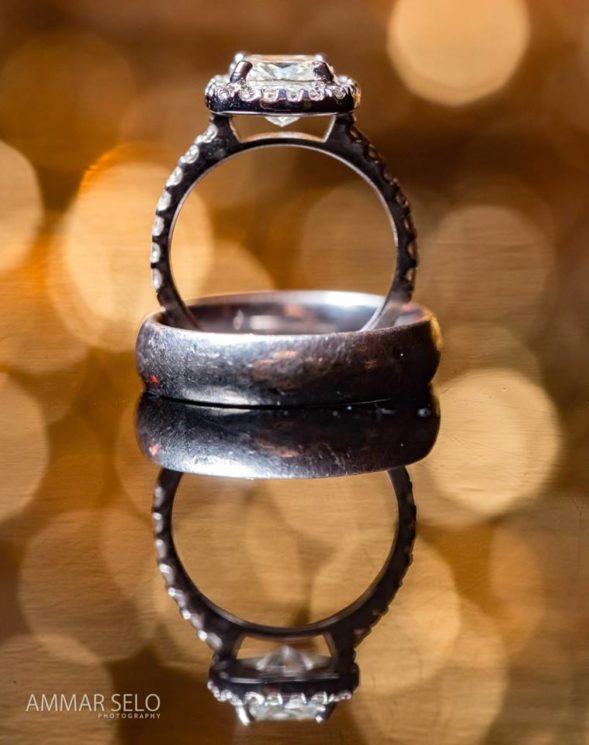 We asked Ammar what the biggest challenge is for him when shooting rings.

Focusing. This is almost always a challenge if the rings are not lit very well. To resolve this issue, I simply turn on my cellphone light and put it up on its kickstand to light the rings. If I see that the cell phone light is messing up my image, I would simply lower my ISO and increase my flash power.

For post processing, Ammar says he spends little time working on them on the computer. Mostly it’s just minor tweaks.

I just make sure the overall color and brightness is pleasing to my taste and then I apply a local adjustment to the large stone to desaturate some of the color, add sharpness & clarity. Sometimes I’ll slightly move the temperature slider towards the blue side. 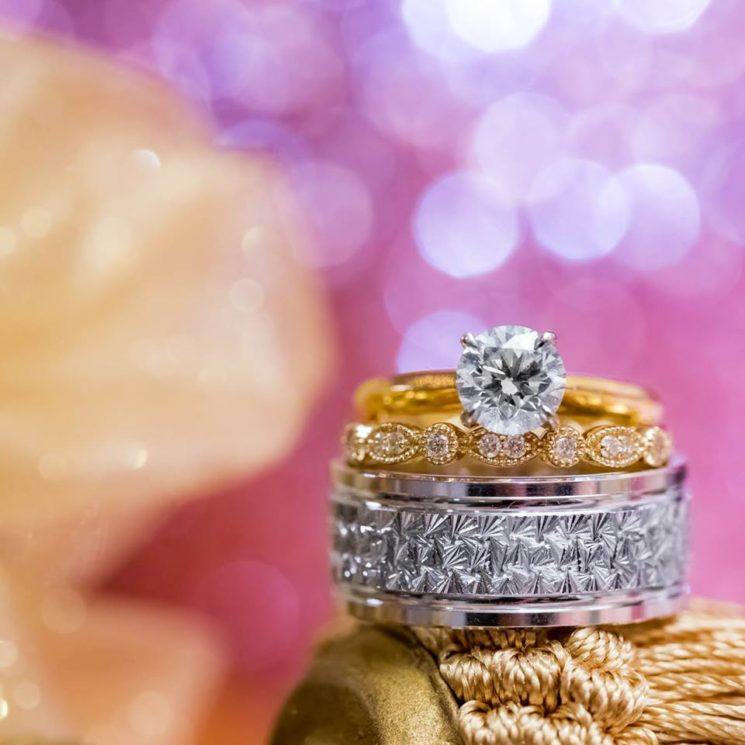 It’s a simple and efficient system that produces some fantastic results. It just goes to show that you don’t really need a lot of time or really fancy equipment to produce impressive photos. You just need to plan ahead and be prepared.

Thank you for talking with us, Ammar, and sharing some of your work and workflow.

You can see more of Ammar Selo’s work and reach out to him through Facebook.

Photographer uses burning building as a backdrop for a wedding photo