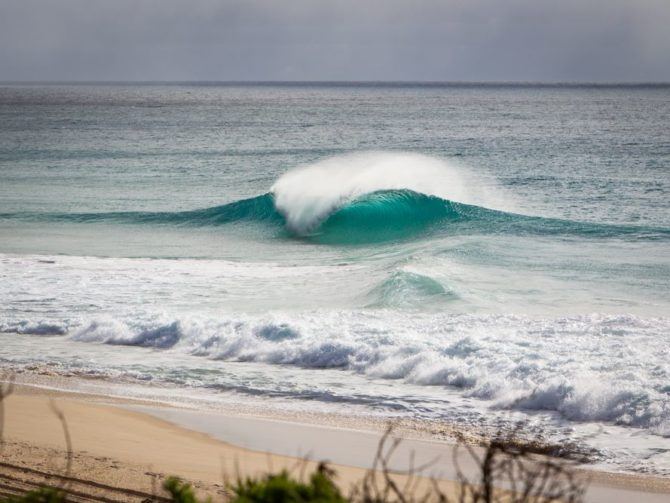 It’s a fact of life these days for photographers that our work may be stolen if we post it online.  No matter what level of photography we’re at, if you post enough images to the web, it’s simply become an inevitable consequence of sharing out work with the masses.

Sometimes it’s an honest mistake, somebody loves your image, likes it enough to share it, and just doesn’t about copyright or crediting the auther.  Other times, the infractions are a little more serious, and the intent becomes obvious, as Australian photographer Steve Arklay discovered.

With around 400 million accounts as of January 2016, Instagram is a platform which many of us visit daily, and occasionally, some of us see our images posted by others.

When credit is given, it’s often usually fine in the eyes of the original creator.  For Steve, however, browsing Instagram one day led him to find this image posted by a user who shall remain nameless, completely without credit or permission.

The image in question is this photograph Steve shot at King Island and was featured on surfing website Swellnet’s “Wave of the Day”, with his permission, in July, 2015.

Rather than do the typical photographer thing of getting outraged and immediately commenting on the image to express their anger, Steve did some digging.

When he found the Facebook page of the person who’d used his image, he was more than a little surprised to discover that it had also been posted there.  The bigger surprise was that not only had this photographer lifted the image and reposted it without credit, but he’d also slapped his own watermark and copyright notice on it. 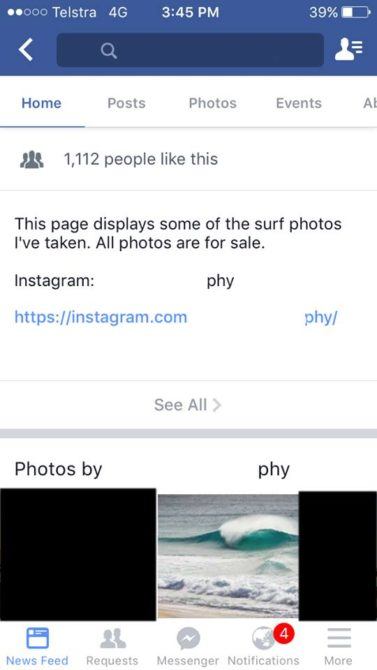 Having noted on the person’s Instagram profile that “All photos on this page are for sale”, Steve enquired about purchasing a print of his own photo. 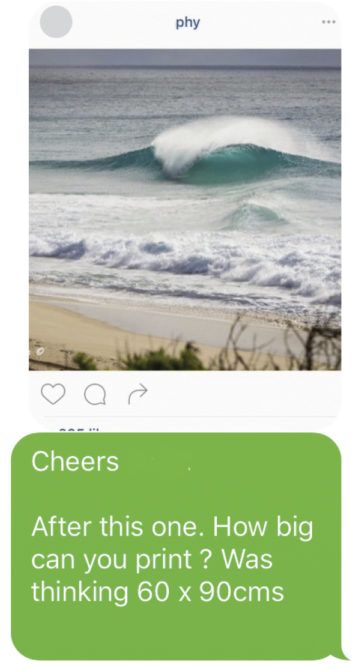 While Instagram may have bumped the resolution of their images slightly in the last couple of years, and started offering formats other than square, they’re still not exactly the kind of quality you’d need to print huge.  Not even close.

So, Steve accepted a smaller size to continue the conversation to see how far it went. 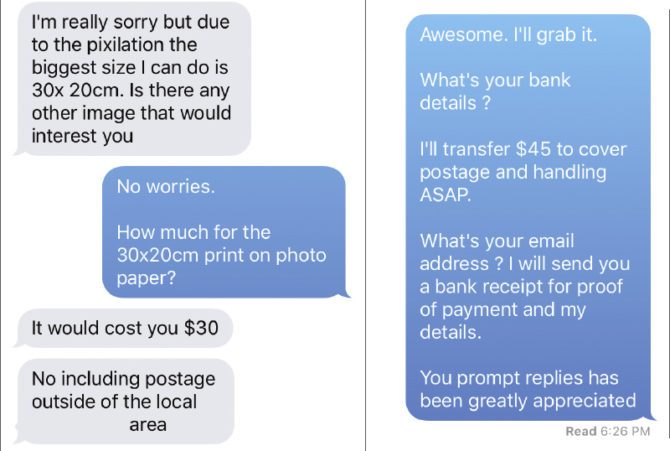 This is where Steve was expected to hand over his details, and upon seeing his name, the “photographer” caught on and all the stolen images were removed.

Needless to say, the sale never went through.

Steve says that he wasn’t attempting to entrap this person by striking up a dialogue, and that professional curiosity was the driving factor.

While this ended with the result that Steve wanted, getting his stolen work removed, who knows how much this person might’ve already made from the image, and how much he may have made from other images on his page that could’ve also been stolen from hard working photographers.

Innocent infractions where people simply don’t know any better are often unlikely to see the photographer compensated for their use, and it’s usually easier to just speak to the person and have them take them down, or just file a DMCA notice if you’re not in a particularly chatty mood.

When it comes to profiting from the work of others without their permission, as well as claiming it as their own creation, the legal route is one that many photographers choose to take, and rightly so.

You can see more of Steve’s work and reach out to him through Facebook and Instagram, and the images & screenshots above were most definitely used with permission. :)

Have you had work stolen and used commercially without permission?  What did you do?  Let us know in the comments.

I interviewed a person who stole my photos

Photographer stole $15,000 worth of gear from his fellow photographers’ NYC studio