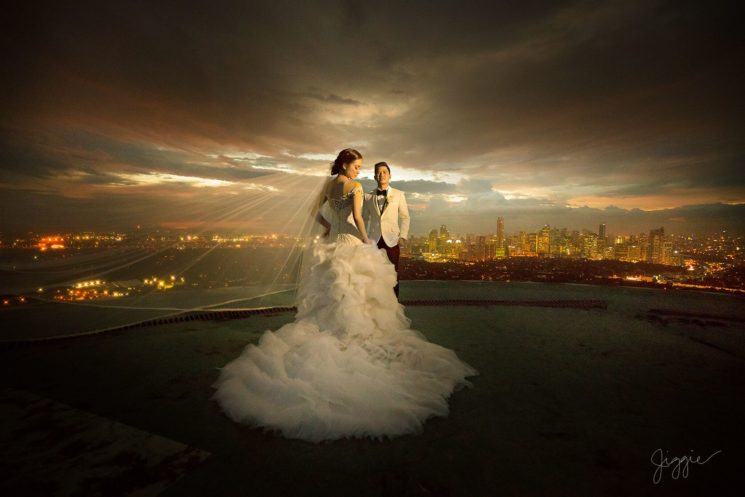 For many photographers, there are shots you see in your head that you one day hope to have the opportunity to create. Those visions can live there for years, just waiting to exist in the real world. For Phillipines based photographer Jiggie Alejandrino, the image above was one such photograph.

When I first saw this photograph, I was immediately drawn in. I wanted to find out more about it, so DIYP got in touch with Jiggie to get some background on the inspiration and how it was made.

I’ve always wanted to shoot a wedding couple in a helipad during sunset, so when the opportunity came that the wedding reception was near a friends condominium unit that had a helipad came, we just had to make it happen.

I must have 50 very specific images rolling around my head of images I want to create, just waiting for the planets to align. A couple of times in the past for me, they have, and a couple of the opportunities presented themselves. So, I know exactly how Jiggie felt.

Critical to a shoot like this is proper planning and timing. Shooting a wedding is dependent on schedule and we were fortunate enough that we were given ample time of about 1.5 hours to travel and shoot (an eternity for philippine wedding standards).

The ceremony ended at around 5:00PM then we travelled around about 2km which took us 30 minutes due to heavy traffic, rushed up the helipad because the sun was setting, took about 15 minutes to set up and shoot, then we had to go since it started raining.

Rain, unless it’s an integral part of the image, is rarely good for a shoot. It’s never fun to have to call a shoot early as the result of rain, either. The sting isn’t so bad, though, when you come home with images like this one.

When you have the luxury of time, you can often take as long as you like to set the equipment up and get things ready. In fact, it’s usually a good idea to do so. Checking over everything 2 or 3 times, just to make sure it’s right. That way, you’re wasting as little time as possible for your subjects.

When you only have 15 minutes, though, you have to work quickly and usually without a lot of equipment. So, I asked Jiggie what he used on this shoot.

I am part of the International Phottix Pro Team so naturally I used the Phottix Indra 500, a portable 500 watt flash unit capable of High Speed sync and TTL. The Phottix Odin II Trigger, to wirelessly control all the functions of the Indra from my camera. The camera I used for this shoot was the Sony A7RII with a 16-35mm f/4 lens slapped on it.

The problem with shoots like these is the fact that there is a time constraint, so having the ability to change my flash settings on the go without having to physically go to the unit is a big help.

Working fast to get images means not only having the right gear, but knowing it inside out. You need to be able to work very quickly sometimes. Knowing which button to hit and not spending 5 minutes hunting through a manual can be the difference between getting the shot or missing it entirely.

I had the Indra 500 on a light stand with a standard reflector and grid, placed on camera right with the flash pointed in an upward manner (so that I can control the light spill on the floor).

The camera was set to manual, I dialled in the ambient exposure I wanted. 1/60th @ f/4, ISO6400, about -1 stop to bring out the colour of the sky. I set my white balance to a warmer tone. I posed the couple, then started shooting. I adjusted the flash power accordingly until I reach the desired effect.

After shooting and, of course, escaping the rain, comes the post processing. Given how tricky this was to get right in such a short amount of time, we asked Jiggie to tell us a little about that.

I usually shoot in Raw to give a lot of leeway. It came in handy with this shoot. As mentioned earlier, time was not on our side. So, I didn’t have the luxury of doing dual exposures for my background, sky and other elements in the photo. That’s when knowing your gear really helps.

I knew the dynamic range of my camera and I knew the acceptable exposure where I could pull the shadows. That’s what I did with this image, I recovered some shadow details via ACR and overlaid it on the original image, masked it and brought out the areas I wanted. Then a little color tweak, sharpening and that’s basically it.

With such a little amount of kit and time available, I’d say the result was very much worth the effort. Thank you, Jiggie, for taking the time to talk with us.