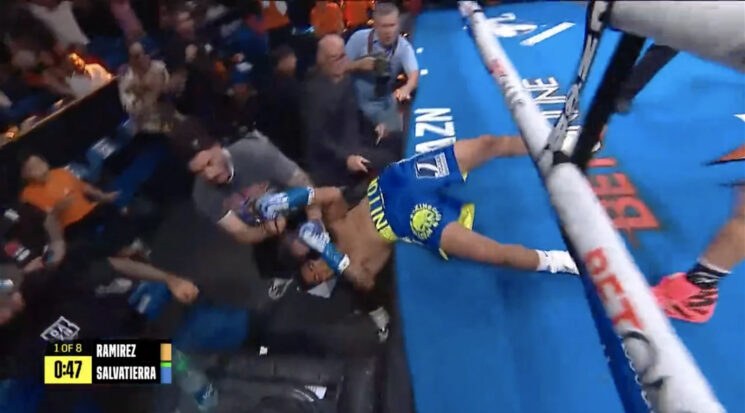 They say photography is often about being in the right place at the right time. Well, this photographer certainly was, but not for taking photographs. A ringside photographer covering the Golden Boy boxing card in Ontario, California at the Toyota Center on Saturday ended up catching a falling boxer as he fell from the ring after a particularly heavy blow.

John “Scrappy” Ramirez defeated Jan “Nito” Salvatierra inside the first round of the super flyweight bout. Ramirez landed a particularly effective punch on Salvatierra which sent him flying through the ropes of the ring.

Luckily for Salvatierra, there was a photographer right next to where he was about to land. The photographer quickly grabbed the boxer, cradling his neck and preventing his head from hitting the hard ground and subsequent serious injury.

The referee counts time while Salvatierra was out, although later then announced the fight was over after seeing that the boxer was likely concussed.

Commenters on Twitter have since praised the photographer for saving the fighter rather than just continuing to document the match.

Photographers often find themselves in unique situations where they may be called upon to intervene in saving somebody from injury or death, due to the very nature of their work. One drone pilot actually saved a woman’s life from drowning when he was out flying his drone on a beach and spotted a woman getting into difficulties, and another photographer actually helped find a baby that had been taken when the family’s car got stolen.

« DeviantArt moves to stop your photos being sold as NFT’s without you knowing
Quick grab your camera, the UK’s starry skies are the clearest they’ve been for ten years »