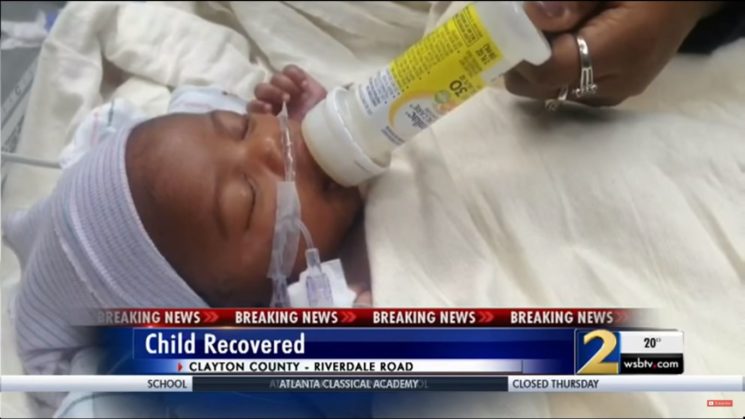 Last week in Atlanta, someone stole a car with a one-month baby inside. The police started the search operation, and Channel 2 Action News reporters were covering the story. In the end, it turned out that the photographer covering the story was the one who found the baby and helped to save her life.

Precious Wilmer from Atlanta had her car stolen in front of a convenience store. As WBS-TV writes, the woman left the engine running and went inside. In the car, there were her two daughters: a four-year-old Arya and a one-month-old Ava. Someone apparently used the opportunity, jumped into her car and took off.

Minutes after stealing the car, the older girl was dropped off by the side of the road and found shortly after. However, the baby was still in the car. Police started the search, and Channel 2 Action News crew was on their way to cover the story.

As reporter Nefertiti Jáquez explains, she and photographer Brian Ferguson were on their way to the scene. On their way there, they saw an object on the side of the road, but they didn’t pay close attention. When they arrived at the scene, they interviewed the mother and she started describing what the baby was wearing. Then it just “clicked.” Ferguson remembered the “object” on the side of the road, jumped into a police car and left to help them find the baby.

The search was successful – baby Ava was found in her car seat by the side of the road. She had spent a few hours in the freezing cold, and she was taken to a hospital. Fortunately, both she and her older sister are in good condition. A day after finding her, the photographer got to meet Ava in hospital.

The picture everyone has been asking for —- @wsbtv photog @BFergusonWSB and Baby Ava. #WSBProud #Team2 pic.twitter.com/ENfjZx6Zgu

After the happy ending for the baby and her family, the police found the car as well. They say it was found along Metropolitan Parkway in southwest Atlanta. However, it’s still unknown who had stolen the car, and the police are still searching for the suspect.