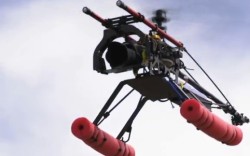 Eric Austin is a videographer located at Texas. Eric is also a talented RC helicopter pilot. With the emergence of Video DSLR Eric combined his two loves.

Eric rigged an RC helicopter with a Canon 7D and is now providing an RC Heli mounted Canon 7D video service. Video and a short interview after the jump.

Eric Austin was kind enough to answer a few of DIYP’e questions via a mail interview we did. 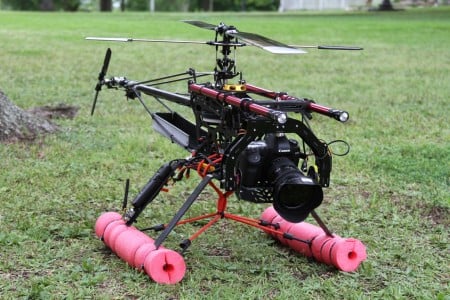 DIYP: The web is sizzling with your helicam video. Can you explain what exactly you do with it?

EA: I use the helicam to film HD video with the Canon DSLR, mostly I concentrate on broadcast TV and film as my main business target. The helicam gives a producer a very flexible way to get a very unique shot at an affordable price.

DIYP: In the video you say “crashing is not an option”, nevertheless, do you have any crash protection gear?

EA: It may not look like I have crash protection gear, but I do. The landing gear is built so that in case of a hard landing it will flex and mostly likely break in order to soften the crash on the camera. However, I always do my best not to crash.

DIYP: OK, I know this is not a politically correct question, but curiosity is killing me, did you ever crash?

EA: I have yet to crash a helicopter while shooting video, however I have crashed several helicopters while I was in the learning phase. Just like anything that is hard to learn, crashing taught me a lot about, how to avoid the crash next time and how to quickly replace the parts that broke.

DIYP: What was the weirdest / technically challenging shoot you did with the helicam

EA: The most technical or challenging shoot I have done just happened a few weeks ago and if you look closely there is a clip of it in the video. I was asked to fly out over a cliff that was about 300′ high with a river below. On top of the cliff there was very little room for vision of the helicopter or room to come in for an emergency landing due to thick trees everywhere. It did make my heart pump faster when I was out over this long drop to the river below in a strong wind. I was thinking ” One mistake and this helicopter is completely gone for good”. This thought did not help the situation either, however just taking my time and remember never to panic while flying made the job go smooth and I got the shot for the client.

DIYP: Can you go a bit into the details of hooking the helicopter up with the camera?

EA: The camera actually hooks up to the heli with just a simple tripod style camera screw. I made it this way also in case of a hard crash the camera might absorb a little less impact if it broke free of the mount. That might sound crazy, but this is my thinking, I hope not to find out this theory anytime soon.

DIYP: I hope so too, are there any electrical or control connections to the camera, how do you control the camera from distance?

EA: Right now I adjust all the camera settings on the ground and then press record right below take off. For still images, I use an external timer to activate the shutter to take 1 picture per second. Soon, I will add capability for a second person to control pan and tilt from the ground while I fly the helicopter.

DIYP: Eric, I am sure you have some more stuff planned., care to share?

EA:I have many new advancements in technology that I am going to be adding to the helicopter to make it even more of a filming machine.
I have already installed a 5.8 ghz video downlink feed that is working awesome. This allows the DP to monitor what the camera is shooting live in the air and relay comments or instructions back to me.
I have an autonomous auto-pilot with GPS currently on my test helicopter. This electronic sensor package will allow precision flying and other features such as, position / hover hold, altitude hold, ect.

DIYP: What is your advice for anyone trying to build a similar rig for a small point and soot?

EA: My advice to someone who would like to build a helicopter for a small point and shoot camera would be to make sure to balance everything that spins. This is one of the most important steps in order to get a good video or picture, other than that just have fun with it.

DIYP: If one want to use your service, how can you be contacted?

EA: I can be contacted directly through my website helivideo.com. I am also happy to answer more in depth questions about the technical aspects of the helicopter at any time.

DIYP: Thanks Eric, looking forward to seeing more of your stuff on the web.

This photographer dangles from a helicopter to take stunning aerial photos

« Hennessy Shoots a Campaign Based On Light Painting
Poll: You Have Gear? »