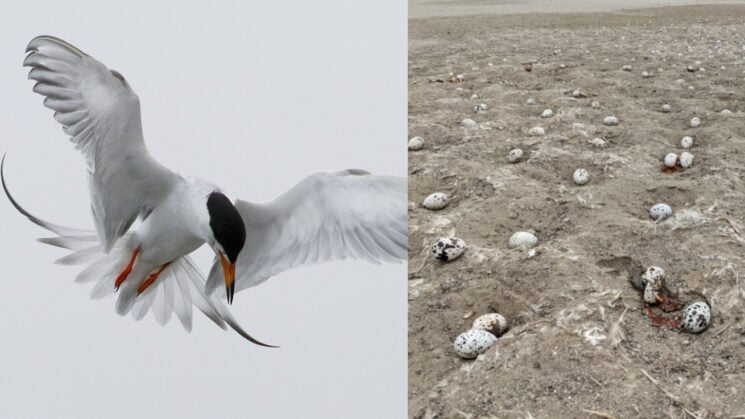 Reckless drone flying in the Bolsa Chica Ecological Reserve ended up with a catastrophe. A crash of two drones terrified elegant terns who were nesting nearby. As a consequence, they fled in terror leaving over 1,500 eggs behind.

The aftermath of the drone crashes is seen in heartbreaking photos Bolsa Chica Conservancy shared on Twitter. In a statement, they wrote that thousands of elegant terns were lost due to the drone crash. “It is believed that the nesting terns left the eggs they were incubating in a response to the threat that the drones posed,” the organization writes. “This has never happened at such a large scale at the reserve.”

A couple weeks ago, thousands of Elegant Terns were lost when 2 drones crashed by Tern Island. It is believed that the nesting terns left the eggs they were incubating in a response to the threat that the drones posed. This has never happened at such a large scale at the reserve. pic.twitter.com/IcGhBZMtOR

The California Department of Fish and Wildlife said that two drones crashed in the tern nest over the last month. Their owners disturbed the birds further when they had to recover the drones, causing three thousand elegant terns to leave their nests.

The Bolsa Chica Ecological Reserve has been a safe place for more than 800 species of animals and plants, abc7 writes. However, it’s been under threat since the COVID-19 pandemic forced more people to recreate outdoors.

Melissa Loebl of the California Department of Fish and Wildlife said that the reserve has seen “a significant increase in the use of the land, including dogs, bikes and drones.” While human visitors are allowed in the area – neither of these three things are. “Dogs chase after birds and their droppings can infect wildlife,” abc7 writes. “People on bikes go off trail, damaging habitats.” And apparently, drones also pose a danger because they frighten birds, and these abandoned eggs are devastating proof of it. “In my career, I have never seen such devastation, so that was really hard,” Loebl said.

According to abc7, the reserve’s management plans to educate the public and increase preservation and safety over the next six to twelve months. I sincerely hope that it will help to protect the animals, as well as that those responsible for this catastrophe will be caught and fined.

These elegant playing cards were inspired by photography

« Rare Zeiss lens from Apollo mission up for an auction, expected to reach $146,000
Sigma will replace your fp dials and buttons to make it feel like an fp L – for a price »