This is either the silliest or coolest looking USB charger I’ve ever seen. I haven’t quite decided yet. USB chargers are a part of everyday life. Whether it’s for our phones, tablets, or even some cameras, we just can’t escape them. MAny of us dispense with the cheap chargers that come with our devices, in favour of more versatile options. We go for units that offer more sockets and power for charging several devices from a single plug socket.

This one has a somewhat interesting design, though. The Fotodiox Mirage strongly resembles a Sony mirrorless camera, and offers three options for charging USB devices. It includes both iOS and Android docking cables, a full size USB port, and a dock for the Apple Watch’s magnetic charging cable. What’s particularly interesting and/or strange, though, is that the “lens” on this can be removed, and you can actually mount real Sony glass to it. Why? I’ve no idea. But you can!

I suppose if you don’t need the watch dock, and you just want to keep store one of your lenses there, it would make a good rear lens cap. Or, you could just stick your favourite vintage lens on there with a cheap adapter. It’ll take anything that has a Sony E-Mount, or other lenses via use of an adapter (which, not surprisingly, Fotodiox also happen to sell). 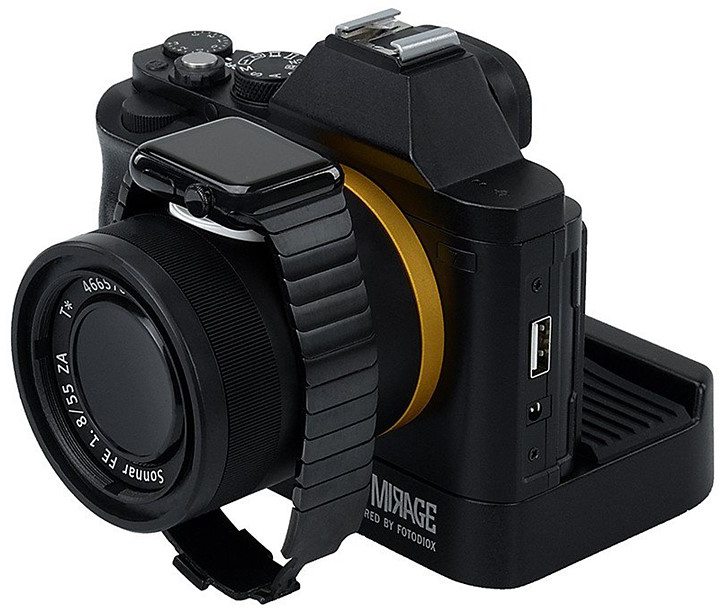 I like the idea of a camera shaped charging station, and I’m sure some Sony shooters will get one of these for the novelty value. At $75 each, though, it’s a bit pricey given the limited charging options. It’s basically, one phone, one Apple Watch, and one regular USB device. If you don’t have an Apple watch, then it’s only going to be useful for 2 items and one must be a phone. And it’s not that powerful a charger, either. 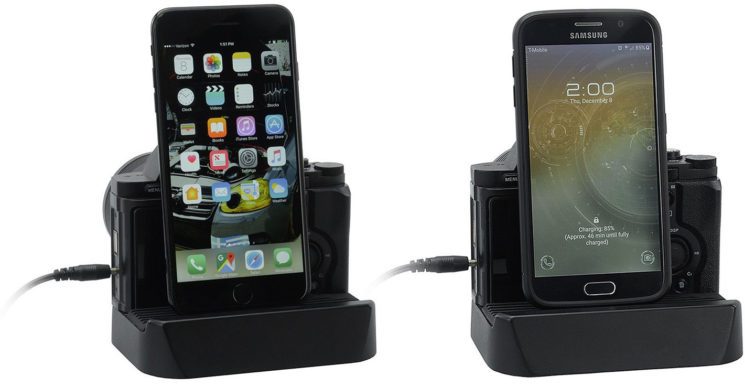 It comes with its own 5v 2000mA (10W) power adapter, although it doesn’t say how much it sends out to each port. 10 Watts really isn’t a whole lot of power for three devices. If you’ve got a phone, a watch and another device hooked up, it’s unlikely they’ll all charge at maximum speed.  In fact, a single iPad can utilise more that than on its own. So, I wouldn’t suggest using this if you’re in a rush to get your devices up to full capacity.

Now, if they release one shaped like an FM2, with 4 regular USB ports that each supply 2.1 amps. Well, that might pique my interest.

How about you? Will this satisfy your USB charging needs? Even if it doesn’t, will you get one anyway because it looks cool? Would you prefer if it resembled another camera system instead of Sony? Let us know in the comments.

Create an Epic DIY Battery Charging Station For Your Gear