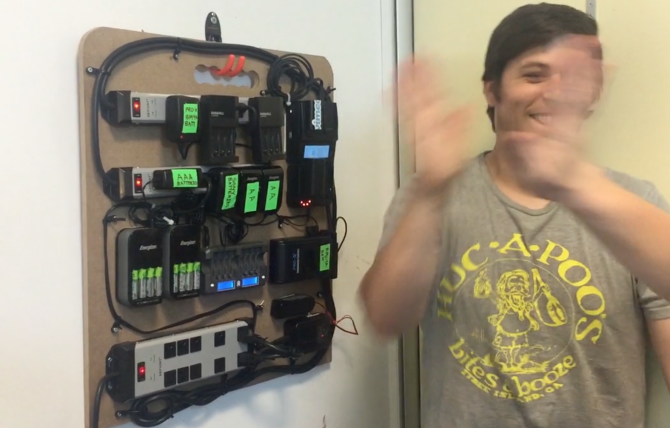 Charging batteries is an everyday part of the 21st-century photographer’s life.  While we shared earlier today how to prevent a battery fire, this little bit of awesome may do just the opposite.  (Okay, so, not really…)

The video production team at Vimeo put together a great tutorial on how they constructed the most epic battery charging station in recent history.

Starting with just a blank slab of fiberboard, they resourcefully built in chargers for every one of their gadgets.  Since they already owned the power tools involved, their total cost was $113…which seems really high in my book.

How I’d make it cheaper

This is more descriptive versus prescriptive.  In other words, I can’t say that this is a sure-fire approach for all readers, but it would work for me.

Every year we go “dumpster-diving” at nearby Bucknell University as the students are packing up for the summer.  No, we don’t actually dig through dumpsters, but the curbs outside off-campus housing become inundated with cast-offs from the students.  A lot of it is legitimate crap, often the broken remains of recent parties.  But, at a school where tuition alone costs $50,000 a year and we’ve met students with spending allowances from their parents to the tune of $60k PER SEMESTER, there’s a lot of good stuff that is abandoned in their haste to go party somewhere else.

Currently in my office I count two pieces of furniture, three lamps, a mic stand, two multi-drawer storage units, a large cork board, and two area rugs that were all sourced via this method.  Seventy-five percent of our kitchen is comprised of dishes, glasses, utensils, and cookware picked up for free.  We’ve also procured appliances, more rugs, lamps in every room of the house, clocks, radios, chairs, furniture, artwork, home decor, emergency supplies, designer clothing (often washed and neatly folded in bags and thrown on the curb), wireless routers, cell phones, countless office supplies, and more.  Essentially, our home is an eclectic smorgasbord of free stuff…and that’s only picking up the good, unbroken gems and missing others after fellow “divers” snatched up even better finds.

But, I digress…  One item that I’ve across frequently is power strips.  I have plenty of them in use and stashed around the house.  That $68 on Vimeo’s list?…reduced to $0.

The cost of their fiberboard?…also reduced to zero with scrap plywood picked up from our “trash runs.” 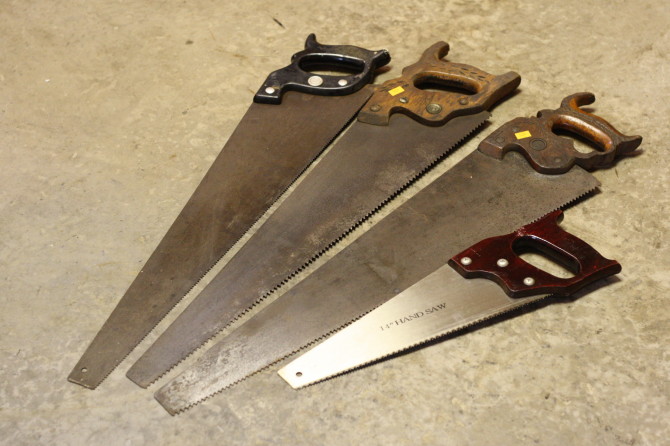 However, not everything I own is scavenged like a hungry rat on acid.  We love attending local auctions and estate sales.  My wife came home the other night with a stash of hand saws she picked up at an auction for $1…for all of them (with a crowbar thrown in free).  Need power tools?  I picked up an jigsaw (like that shown in their tutorial) and a power drill for $.50 each at another auction.

So, using their cost for everything else, I’d reduce this build to about $37, including power tools.

Moral of the Story

Every day we see all kinds of DIY ideas and inspiration, but, for those on a budget, it can be a little disheartening to think of the potential cost involved.  However, with a little resourcefulness and ingenuity, you can keep your DIY budget to a minimum.

And, while you’re at it, check out my post where I detail creating a commercial image with dumpster-dive trash and cheap Walmart gear.

« How Destroying My New $1600 L-Lens Made My Month
Humor: This Diagram Shows The Creative Fear Of Committing Work »