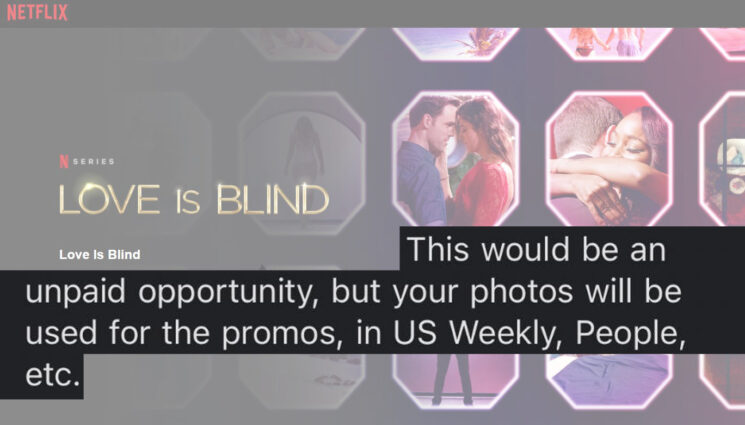 We may argue whether or not we should work for free, or when we should do it. But if a company worth billions wants to hire us, I guess we can expect to be paid. Or not?

The producers of Netflix’s show Love is Blind reached out to photographer Megan Saul to offer her a gig. It would be an opportunity of a lifetime… if only it weren’t paid in exposure instead of real money.

Love Is Blind premiered on 13 February 2020 on Netflix and became the number-one trending program during the finale. It’s a dating reality TV series, often compared to Married at First Sight and The Bachelor. I admit that I had to google it to learn what it’s all about, and here’s a short description from Wikipedia if you’ve been living under a rock like me:

“The series follows 30 men and women hoping to find love. For 10 days in a speed-dating format, the men and women date each other in different “pods” where they can talk to each other but not see each other. Whenever they decided, the men were able to propose to the woman they want to marry. After the proposal, and meeting face to face for the first time, the engaged couples headed to a couples retreat in Playa del Carmen, Mexico. During this trip, they spent time getting to know their partners and were able to meet the other couples participating in the experiment.”

The producers of the show, Kinetic Content, recently reached out to Megan Saul and offered her to shoot five weddings of the couples who got engaged in the show. “I’m a producer for the show ‘Love is Blind’ on Netflix,” Natalie of Kinetic Content wrote in her email, “and wanted to reach out because we would love for you to potentially be a wedding photographer for our upcoming season.” She explained how popular the show is and asked if Saul would be interested in participating as the wedding photographer.

The email kept Saul really excited “for all of 20 minutes,” as she explained in a Facebook post. That is until she heard more about the gig. After she responded to Natalie to learn more, she learned that “it would be five weddings total” and that “this would be an unpaid opportunity, but [her] photos would be used for the promos, in US Weekly, people, etc.” When I hear “unpaid opportunity,” especially from a company that makes tons of money, I feel like smashing something. I suppose this is how the photographer felt as well judging from her post.

“Do you recall we are in a pandemic where the service industry is struggling significantly? You are worth $30.48 BILLION (sorry $200 BILLION) and can’t pay a photographer anything for 5 days, 5 weddings? That is A LOT of exhausting work and hard work for you to get FREE images for you to use to advertise and promote a tv show that you will make a ton of money from. It’s insulting to artists world wide.”

“What goes in to my work is not just my time, my artistic eye or my ability to capture moments they wouldn’t be paying me for,” Saul writes in her post. Here are the highlights of her costs that she would have if she accepted this “unpaid opportunity:”

“My camera gear ($35k+ and any rentals I may need), my team (bare minimum $500/day), insurance ($2000 a year but likely would need additional coverage for something like this), my attorney (because someone is going to need to look over the contracts), my editing time, my computer, my gas every day, food, and gosh I’m sure I can think of plenty more expenses that go in to what I do.”

Hey Netflix! I got a really awesome email today that I thought was super exciting for all of 20 minutes. Are you aware…

Saul tagged Netflix in her post but notes that it wasn’t them who contacted her but Kinetic Content. Still, “Netflix is the one supporting the show and their values,” she adds. “They shouldn’t support free work that they will profit on by using images from an unpaid gig.” Whoever fault it is, it’s wrong. And it seems even more wrong in 2021 when photographers and small business owners have suffered so much due to the pandemic.

“Pay your contractors. Pay artists. Pay people a fair wage,” Saul writes. “If you profit on something like all these big corporations are then pay at least something. It’s insulting and degrading.”

Patience pays off: five reasons why being patient makes you a better photographer

« YouTube’s TikTok rival, Shorts is now out of beta and rolling out across the US
Artist creates stories by combining macro photos with adorable illustrations »