UPDATE: This story went under trial, which has now ended. Polito won and The court ordered the Moldovans to pay Polito $1.08 million. you can read the latest update here.

Imagine getting a coffee at Starbucks, paying at the cashier and then when coming to pick it up, being asked for an extra buck as cup fees. A similar situation is at the heart of a dispute between newlyweds: Andrew and Neely Moldovan and wedding photographer Andrea Polito.

The couple got married in October and apparently had a pleasant wedding. They told NBC 5 that they signed a $6,000 contract with Andrea Polito which included a “40 page 8.5×12 Storybook Album with up to 80 images“. Surprisingly when asking for their photos, the photographer requested an additional photo-album-cover-fee with the cheapest one costing $150.

An email exchange which was shared with NBC 5 the Moldovans share the following exchange:

“- Do we pay extra for a cover? Is there not a standard cover it comes with?”
– “Your package includes the 40 pages & 80 images portion of the album, but we leave the album cover to be decided on when you actually order (it)…”

The couple also says that Polito will not send them their CD unless they pay for the cover or forfeit the album altogether, and if not paid by mid February, Polito will incur an additional $250 archiving fees. 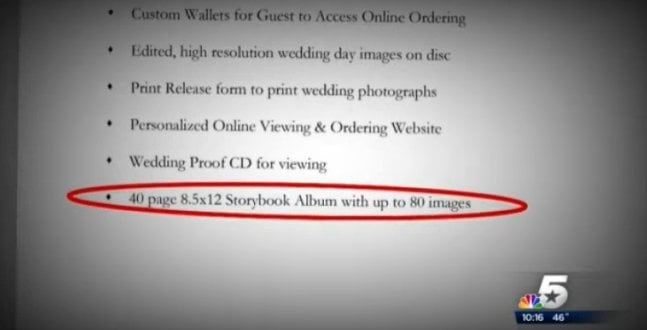 Polito responded to NBC 5 that: “We make the utmost effort to consistently provide the best customer service and highest quality of photography in the industry“.

It seems that Polito‘s facebook page is now offline.

Now, I am not a wedding photographer, but I find this situation extremely awkward. If I was to pay for an album I would definitely assume that it included a cover, very much like when ordering the 357 pages Harry Potter and the Chamber of Secrets I would expect it to come bound and all. Just saying.