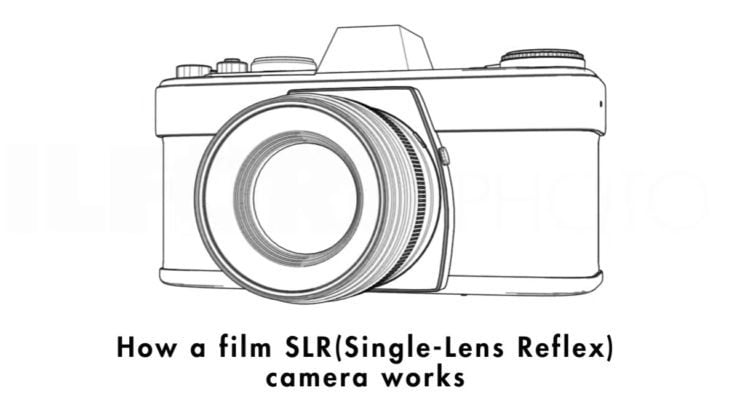 Ilford Photo have been popping out some new videos lately. Amongst them is this cool little animation that shows, in simple terms, how a 35mm film SLR works. The 35mm Single Lens Reflex camera was a revolutionary development for photography. It was the ultimate compromise of quality and portability. But most importantly, it allowed the photographer to see through the lens of the camera and know exactly how the image would be captured on film.

Up until this point, most small portable cameras had separate viewfinders. They gave you a rough idea, and sometimes they were close, but never perfect. These days, much of the world has shifted entirely to digital. Although many still shoot film alongside digital. While the recording medium may have changed, the principle still remains the same.

Although first described with the use of a reflex mirror in a camera obscura in 1676, it wasn’t until 1936 that SLRs were really available. Their popular development started in Russia and Germany. Followed not too long later by the Japanese. Some of those early companies such as Zeiss and Pentax are still around today, although not all of them still make cameras.

Light reflected off the scene enters through the front of your lens, where it goes through one or more elements. It then passes through the lens aperture. This allows you to control how much light you let in. Then it goes through another glass element. From here, it bounces off a mirror, into a prism above it.

There’s usually a focusing screen of some type in between the mirror and the prism. The prism then reflects internally to produce the image we see when we look through the viewfinder.

When you press the button, the mirror flips up. This is why you can’t see through the viewfinder when you’re taking a shot. The image simply isn’t reflecting off the mirror and through the eyepiece any more. Instead, the image is projected straight toward the film plane. Or, in the case of DSLRs, the sensor.

Then, the shutter opens, exposes the film or sensor, the shutter closes, the mirror flops back down, and you can see through the viewfinder again.

It’s a fairly simple concept. One that’s been around for a few hundred years. One that’s been in practical daily use for at least the last 80 years. Some might argue that the DSLR’s days are numbered with the advancements in mirrorless technology recently. But, SLRs will always be popular with film shooters.

If you want to see some more of Ilford’s videos, and be notified about future ones, check out their YouTube Channel.

This trippy animation was made from a single photo