One of the harder elements on light painting is balancing night skies and fire. Fire requires small aperture, while sucking in the light from the stars requires a long exposure at the widest aperture possible. 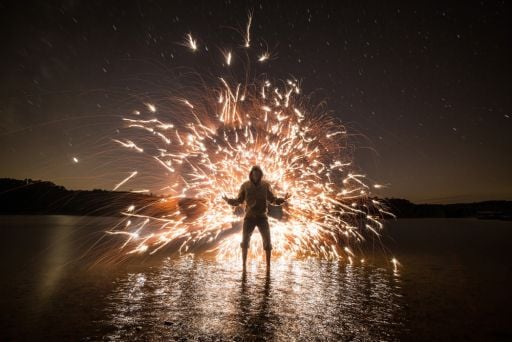 Light Painter Dennis Calvert shares a great tip on how to balance the both without the use of photoshop.

The trick is to use a lens with an aperture ring, and change the aperture during the exposure. Now those lenses are getting harder and harder to come by with newer CPU equipped lenses are controlled from the camera.

Dennis used a Rokinon 14mm f/2.8 – a fully manual lens which aside from being pretty affordable it is darn sharp. Having an aperture ring allowed changing the exposure parameters midway through the exposure. Here is how Dennis Describes the trick:

“To create the image at the top of this post [hi-res here], I taped (duct tape, for the obsessively curious) a sparkler fountain to a stick and moved it around behind a friend. For the first 50 seconds of the exposure, the camera was set to f/8, ISO100. After I finished with the fireworks, I walked over to the camera, opened the aperture up all the way to f/2.8, and let the sky burn in for another three minutes while my friend stood perfectly still. The total exposure time of the photo was 212 seconds. Having your friend stand barefoot and motionless in a cold lake for nearly four minutes after raining hell fire down on him really brings out the sadist in you.“

If you have some old manually controlled lenses, don’t head out to eBay just yet – you may need one if you are doing complex light painting.

A Neat Trick To Determine Your Dominant Eye

« 14 Years Old Shares Amazing Conceptual Portraits, Shares BTS and Setups
How I Made An Epic Photo Of Battling Pyromancers »