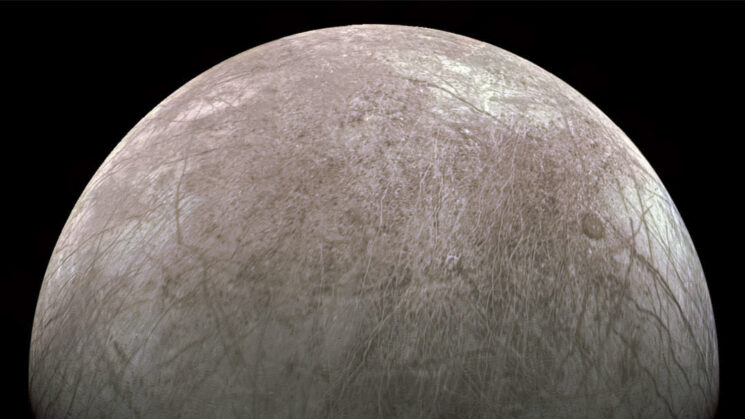 No, it’s not the back view of Patrick Stewert’s head. Nor is it a cricket ball that was lost in 1926 and spent the rest of its life hidden under a hedge on the village green. Nope, what you’re looking at instead is actually one of Jupiter’s 80 moons. This is an image of Europa released by NASA and taken by its Juno mission.

Observations from the spacecraft’s pass of the moon provided the first close-up in over two decades of this ocean world, resulting in remarkable imagery and unique science. 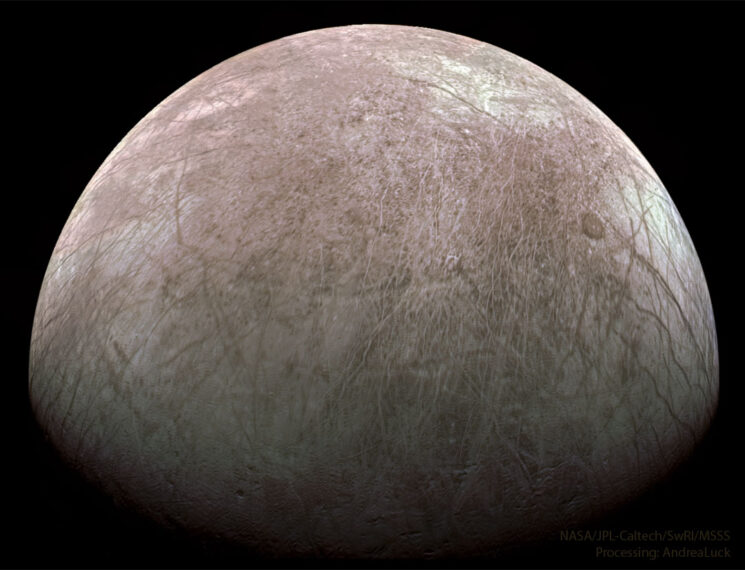 The dirty cracks visible on the surface are actually in the ice surface that covers Europa. There is a high degree of speculation surrounding those ice plains. Many people believe that there could be oceans underneath, which could in turn, potentially support some sort of life form. Underground oceans are thought likely because Europa undergoes global flexing due to its changing gravitational attraction with Jupiter during its slightly elliptical orbit, and this flexing heats the interior.

Europa is roughly the same size as Earth’s moon. This image was taken when Juno passed within 219 miles of its surface, the closest fly-by so far by the solar-operated spacecraft. The images focus on a region near the moon’s equator called Annwn Regio. 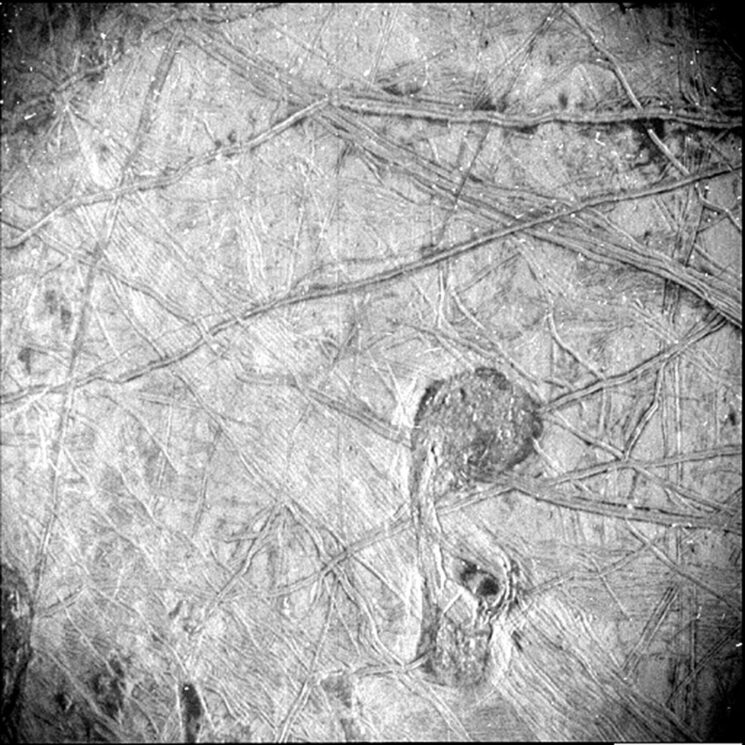 NASA has also released the highest-resolution photo that the Juno mission has ever taken of Europa. The image (above) shows a specific portion of Jupiter’s moon Europa and reveals a detailed view of a puzzling region of the moon’s heavily fractured icy crust.

The image covers about 93 miles by 125 miles of Europa’s surface, revealing a region crisscrossed with a network of fine grooves and double ridges (pairs of long parallel lines indicating elevated features in the ice). Near the upper right of the image, as well as just to the right and below centre, are dark stains possibly linked to something from below erupting onto the surface.

Below centre and to the right is a surface feature that recalls a musical quarter note, measuring 42 miles north-south by 23 miles east-west. The white dots in the image are signatures of penetrating high-energy particles from the severe radiation environment around the moon.

The mission uses a star tracker device to orient itself. It’s actually a sort of star-tracking camera, hence the images we are seeing. Designed for low-light conditions, the SRU has also proven itself a valuable science tool, discovering shallow lightning in Jupiter’s atmosphere, imaging Jupiter’s enigmatic ring system, and now providing a glimpse of some of Europa’s most fascinating geologic formations.

“This image is unlocking an incredible level of detail in a region not previously imaged at such resolution and under such revealing illumination conditions,” said Heidi Becker, the lead co-investigator for the Stellar Reference Unit (SRU). “The team’s use of a star-tracker camera for science is a great example of Juno’s groundbreaking capabilities. These features are so intriguing. Understanding how they formed – and how they connect to Europa’s history – informs us about internal and external processes shaping the icy crust.”

The Juno mission has provided images of great beauty and detail of the planet and its moons. Images of Jupiter’s atmosphere and its red spot in particular have attracted much attention. In 2023 the Juno mission plan to fly past another of Jupiter’s moons, Io. Io is the most volcanic body in the solar system so the images obtained from that should be very interesting.

« How to create a perfect, risk free light painting circle
The Fisheye Baby is a tiny working $35 film camera »