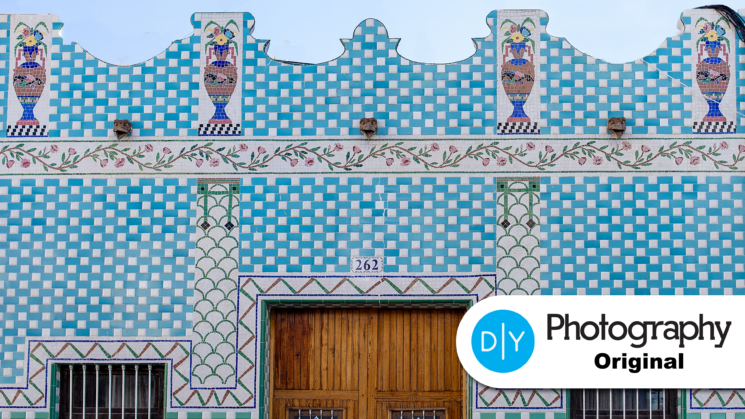 It’s always interesting at the end of a year to look back and reflect on where you’ve been, and where you’re going to go next in the new year. Often I think about what I’ve achieved, and what goals I’ve attained, or missed. But this year I decided to take a slightly different tack and looked back at the images I shot instead. Which ones really spoke to me? Which ones am I most proud of? Which ones point to the direction I want to keep going in? It’s no surprise that the majority of these fall under personal work or are new things I was trying out. They aren’t perfect, but they all point towards some sort of growth, which is why I like them. So, here are my favourites, and my thoughts behind them. 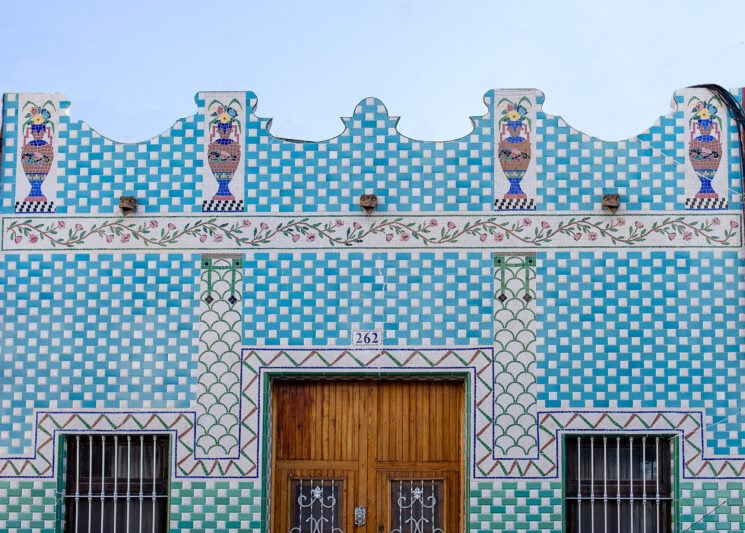 I shot this for a website about the city of Valencia, I basically got paid to hang out by the beach and take photos – could life be any more perfect? The image itself is not perfect, however. There’s a little distortion due to the fact that these old houses are not perfect either, they have wonky walls and imperfect proportions. But I like the colour palette – the contrast between the orange in the doors and the turquoise and blue of the tiles and sky. I also like the crop and the graphic nature. These houses are the traditional fisherman’s houses near the beach area of Valencia, and each one is different. If you ever visit the city, it’s well worth a stroll around this area. 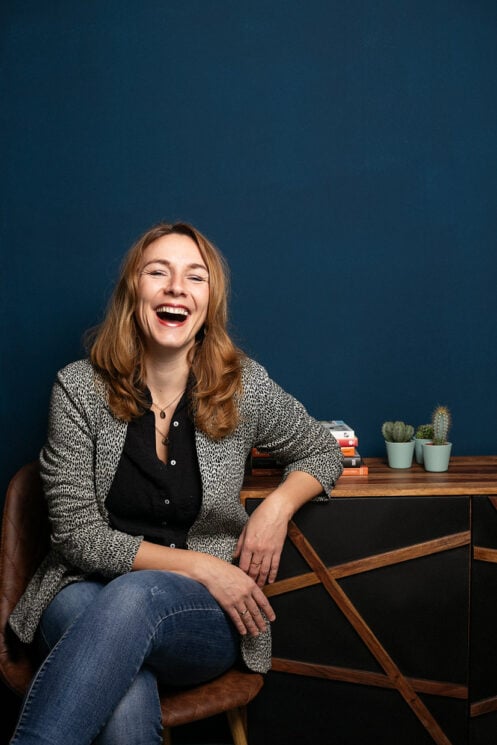 My friend needed some updated brand images for her new business coaching website. We worked together on the layout and branding colours, and it turned out that one of the walls in my house matched her brand perfectly. Nina is an individual. A very creative and flamboyant person who isn’t afraid to speak her mind. During the shoot, I had this constant feeling that I wasn’t doing her justice. In the end, it was these in-between shots that truly captured her spirit, and I am still very proud of this one that properly captured her genuine laughter and love of life. Still life images are not my usual kind of thing, I tend to shy away from them. But I was wandering around the Huerto (the farmer’s allotments where they grow the veg) one evening trying out my new camera (Canon R) and trying to get to grips with it before I had to use it on a paid shoot. I completely missed golden hour due to my useless concept of time and ended up at dusk on the outskirts of town by myself with just one or two lone dog walkers. Not exactly ideal, so I took some very mediocre shots before I started to head back home. I spotted these cauliflowers in the fading light and I took maybe two shots in total before I left. I love the soft beautiful light, and I am amazed at how well my camera can handle such low light. It has really made me rethink how I shoot, and what light I look for now. This is actually several images shot handheld with a 50mm lens and stitched together in post, creating one large image. It’s a technique known as the Brenizer method and is pretty straightforward, but it can create some interesting images that echo a medium format style. I’d like to say this image was entirely planned, however, it was more down to my lack of organisation when I rushed out of the door and grabbed my camera bag, only to find out later that I’d only brought my 50mm lens with me! The ruined castle was also unplanned. We actually did a different hike earlier in the day that was incredibly boring, and so on the way home, we thought we would stop to check out this castle. And it was golden hour, so perfect! One incredibly fast and steep run up the hill and then the storm clouds began rolling in. But I was lucky to get some interesting shots and try out this image stitching method, one of which I have continued to enjoy using, as I do love my 50mm lens!

6. This groomer and show jumping horse: 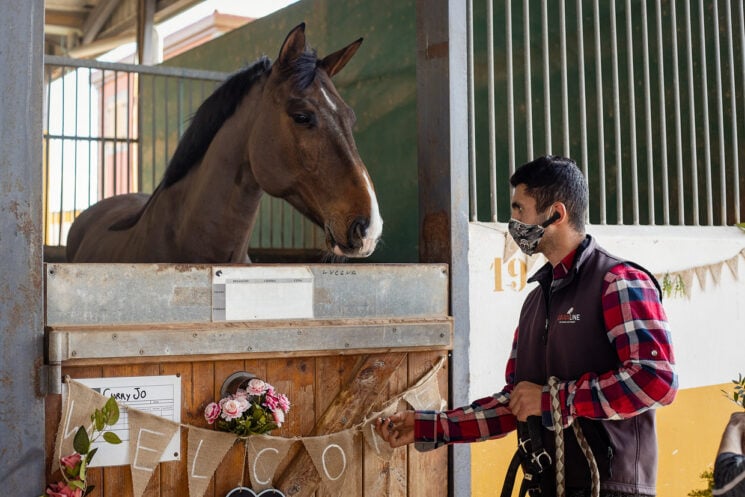 Photographing animals is both a joy and a challenge, and I’m not experienced around horses. So when my client contacted me to photograph some images of the horses and young riders in a local riding club I was both fascinated by it and completely out of my depth. Not really knowing much about riding culture I asked for tips from more experienced horse photographers that I know, and took a documentary approach to the shoot. The light was glorious and I came away with some beautiful images. I particularly like this one. The intensity and eye contact between the groomer and the horse really shows the bond that they had. Also, the horse has his ears pointing forwards which I was told is what you want in horse photos! The face mask is also a sign of the times, a juxtaposition between the flowers welcoming the new horse and the tough times we are living through.

5. An aerial abstract shot of the Med: 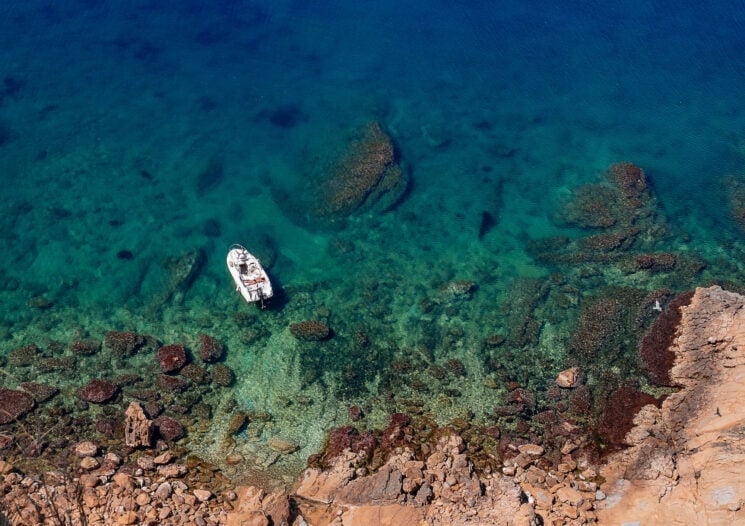 Once again it’s the simplicity of this image that I really like. The colours, the almost toy-like look of the little boat in the cove, with a woman sunbathing, oblivious to the fact that there is a photographer on the cliff above! The seagull flying tiny through the image. I just like it. Is it perfect? No, but that’s ok! It’s making me want to try more shots from above, perhaps even to try flying a drone sometime! And yes, the sea here really is that colour. 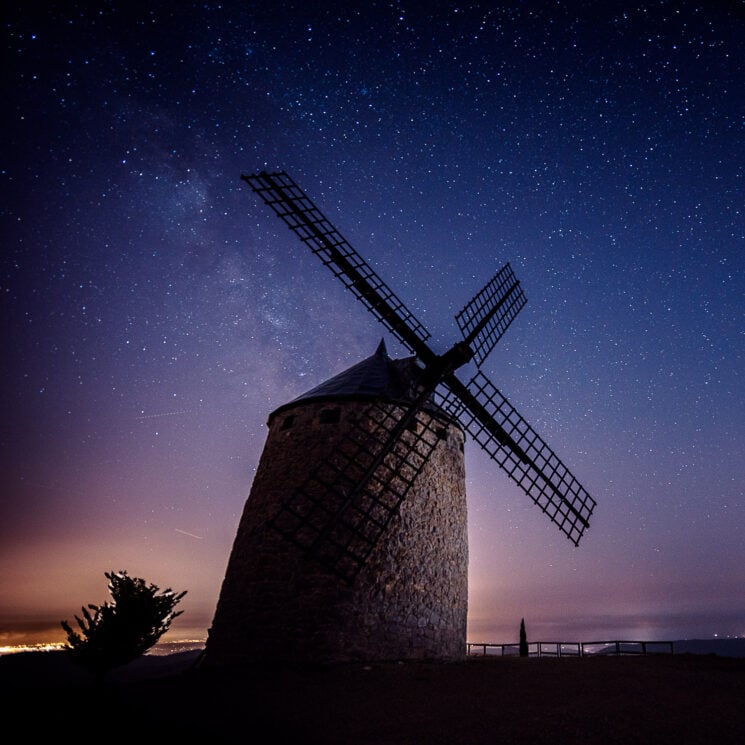 Over the past year, I have enjoyed trying different types of photography that I hadn’t done before. One of these was shooting the night sky. This was my first attempt at anything astrophotography related and I have to say it was immediately addicting. Windmills are pretty ubiquitous in Spain, but in the Valencia region, there are only these two, which have been rehabilitated. It’s a pretty remote location and it appeared to be very dark on the night, but as you can see the light pollution from the towns and city was considerable. Even so, this marked the beginning of an exciting new foray into light painting and shooting the night sky, and my Canon R worked remarkably well in low light, as did my Laowa 15mm f/2 lens. Sometimes new gear makes me happy, what can I say?

3. A winemaker in his cellar: This was the final image from a very fun assignment I had. I was asked to photograph 4 different wineries in one morning for a friend who was setting up a wine export business. So we visited the bodegas, some wine was definitely drunk along the way, and frankly, by the final winery, I was just happy to have my images in focus (don’t worry we had a sober driver)! Seriously though, I absolutely love taking environmental portraits so I made sure to capture a portrait of each of the owners in their cellar. This was my favourite. I used just one Speedlight with a shoot-through umbrella held by my friend which lit up the subject and a few of the barrels. I am heavily inspired by lighting in cinema and I really like it when the lighting looks natural and motivated. That is why I made the decision to include the bare bulb hanging overhead. The light isn’t coming from there, but it almost looks as though it could be. 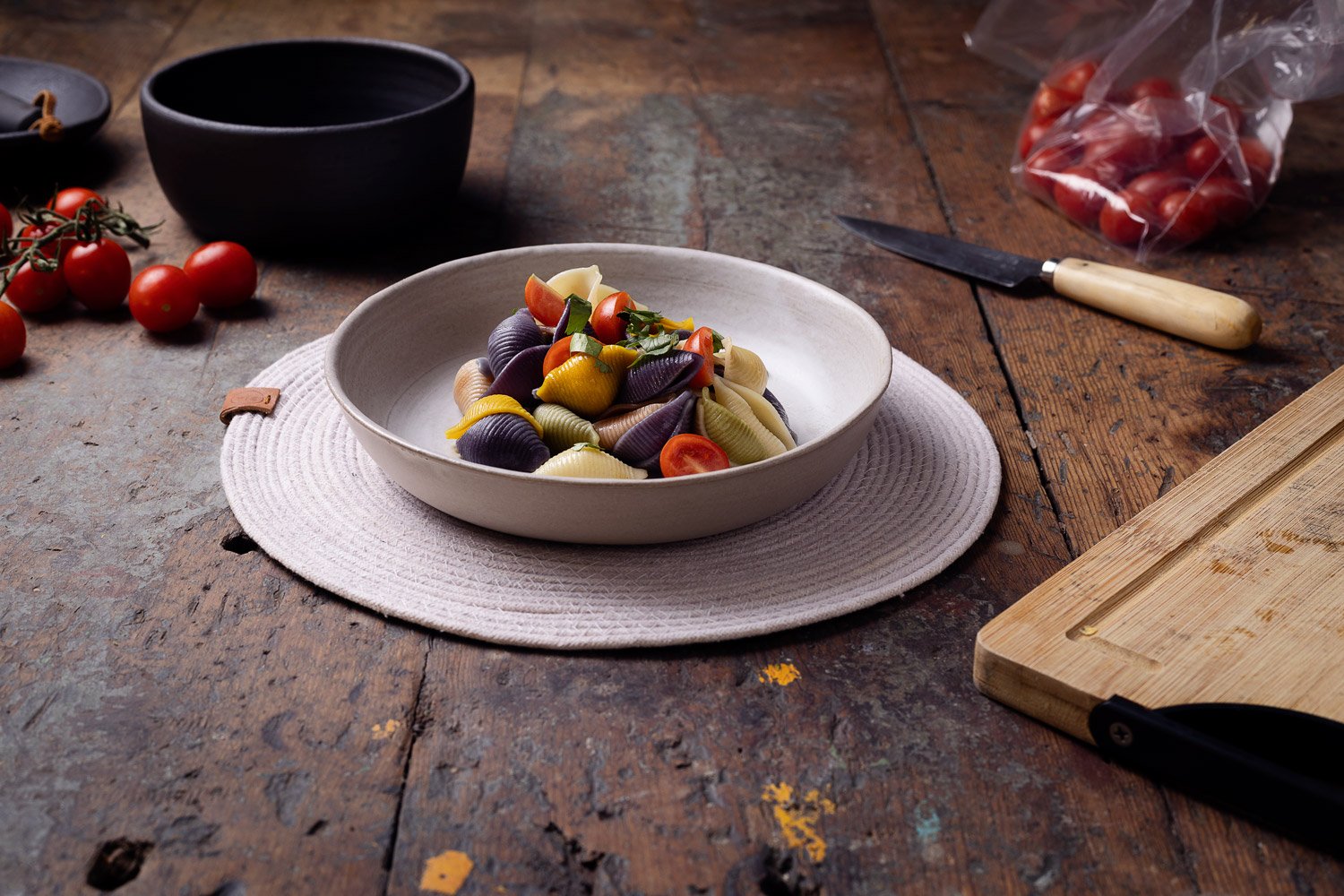 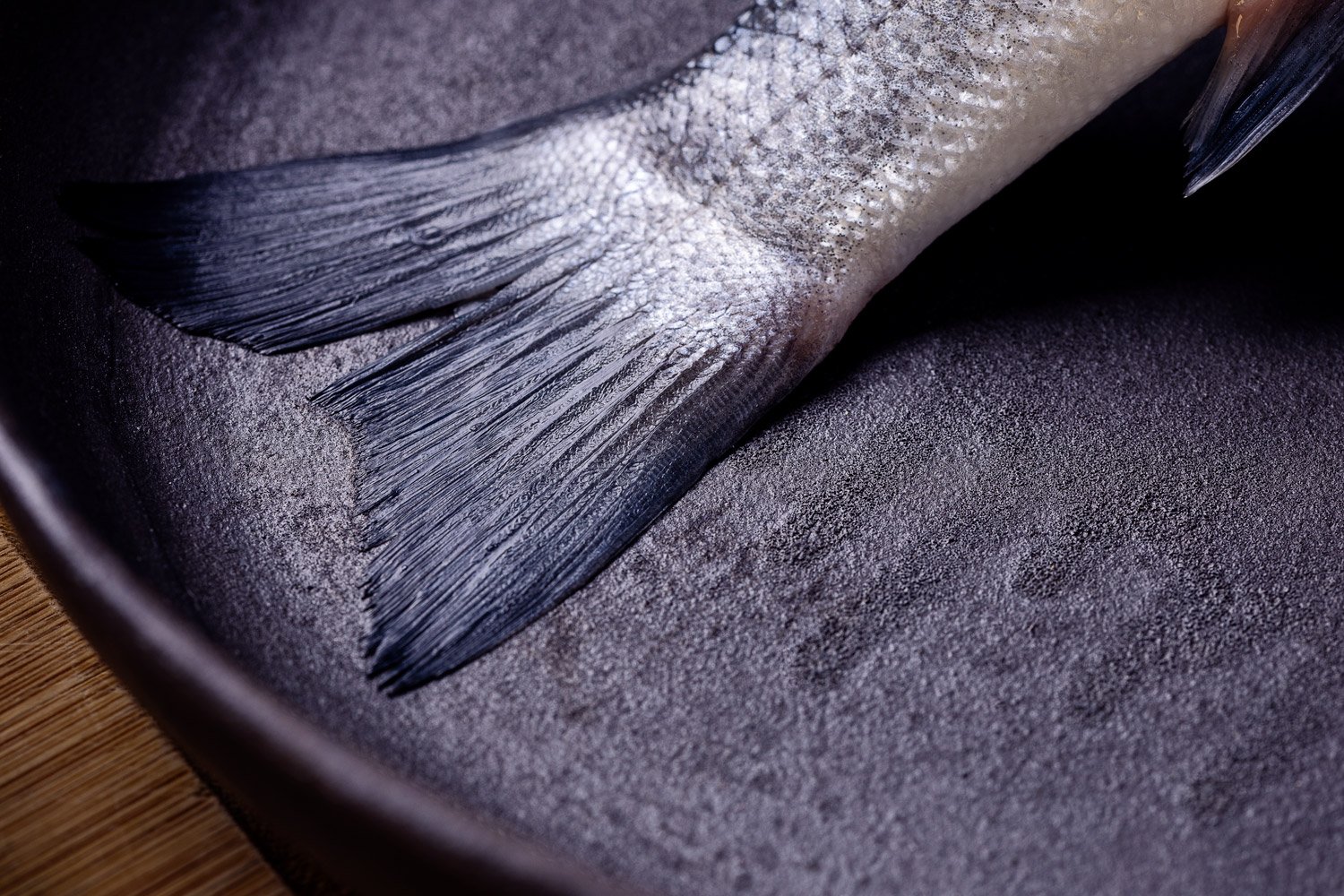 I’d gone off photographing food earlier on in the year after an ill-advised portfolio review which I stupidly took to heart (main lesson here: while reviews of your work can be helpful, it’s just one person’s opinion and don’t let it derail you). Previously I’d been having fun trying out new things regarding food, even though I am certainly no food stylist. But I let myself get away from the joy of creating. Until my friend, a very talented ceramicist contacted me to work with her on creating some images for her new website. Her ceramics are just beautiful, all individual and handmade, and each with a unique texture. They are a joy to photograph, and her studio was a fantastic place to work in. A classic garage with perfect natural light which I could enhance with one strobe and a few reflectors, and this wonderful antique wooden farmhouse table, full of character. We had fun just playing around with the different food (she happens to be French so knows food, but is also no food stylist!) and coming up with different ways to showcase her plates and bowls. These images mark a return for me back towards the joy of creating again and not giving a damn about what anyone else thinks of my work. And why have I chosen this image as my favourite from 2021 you may ask? Well, for many personal reasons and what it signifies more than anything. The end of 2020 was a hard year for all of us, and I took this image in January 2021. I’d just started to get outside the city more, exploring the landscapes of the region and fell in love with landscape photography again. It was something that had got me into photography many many years ago in the first place, but somehow I’d moved away from it. Being outside with the sunshine and a camera was a return to a simple and pure form of joy. I also love the colours of the oranges and the blue shirt of the person standing there (all planned by the way!), and for me, it has a quiet optimism, something a little bit hopeful.

For all the bad things we have endured this last year – the seemingly never-ending pandemic particularly – there have been many many bright spots. New friendships and a rekindling of old ones, new jobs (hello DIYP!), dusting off my drum sticks and joining a band, and getting outside with other people crazy enough to enjoy spending their nights shooting photos in graveyards and up mountains have all been wonderful highlights to this past year. And of course, spending time with family again after so long apart. These are the things we must hold onto in 2022 and seek more of.

What were your favourite images of 2021 and why?

Yes, saturation and vibrance are different things and here’s how they both work