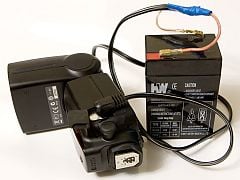 If you’ve been shooting with a flash for a while, I’m sure you had some battery problem or another at least once. Like when one of four batteries goes bad and quickly discharges the other three. Or when it’s cold and the batteries don’t hold their charge so well anymore. Wouldn’t it be nice if you could have a more reliable source of power? One that virtually lasts for ever (well, not forever, but for a darn long time). This is probably on the wish list of anyone who is shooting off shoe and don’t care much about weight, but do care about recycling time and number of pops that can be squeezed in a session.

Four full alkaline batteries connected in series will give you about 6V total voltage. Four fully charged NiMH will net you about 5V. A fully charged sealed lead-acid battery (SLA) is about 7V and it eventually goes down to 5V as the battery discharges. As you see, a fully charged SLA is slightly above the rated voltage for the flash, but in practice I’ve never had a problem with that. I believe that the logical electronics in the flash works on 3V from a regulated supply (i.e. with a higher input it would just generate a bit more heat) and the step-up converter that produces high voltage doesn’t really care about its input as long as it’s DC and above 4V.

Your flash recycle time depends on your battery’s ability to give out high current. Think about the charge flowing out of your battery into the capacitor. The faster it goes (higher current), the faster it will fill up your capacitor. To put it in simple words: with SLA your flash will always recycle just as if you have a fresh set of ordinary batteries. Slightly faster, maybe. But not too fast like when you’re using an external high-voltage pack.

In my opinion, SLA is the way to go, and I’m gonna show you how!

First, some words of caution. Taking your flash apart is a dangerous thing to do. Even when the unit is turned off, the capacitor still retains its charge that is potentially lethal. I’m no medical expert, but my guess is if you short a 1000 uF capacitor charged to 50V (typical capacitance and residual voltage) with your hand, you’re gonna get 3rd degree burns. To discharge a capacitor you need to connect some load to it. Shorting it with a screwdriver is a bad idea, as the spark will make a loud noise (think thunder), melt the terminals and potentially damage your capacitor. A good load is an incandescent (tungsten) lamp with two wires attached to it. The lamp will light up brightly for a moment and then go dim, indicating that the charge is gone.

Now, back to the mod. Canon flashes have a high-voltage port that (to the best of my knowledge) connects right to the capacitor. To use it we’d need an external high-voltage unit, like the one from Quantum. There’s a problem with that, however. The unit recharges the flash so quickly, that firing it repeatedly will probably make the lamp overheat and eventually go bad. The connector itself is of proprietary design, so adapting it to our needs is impossible. It needs to be replaced. 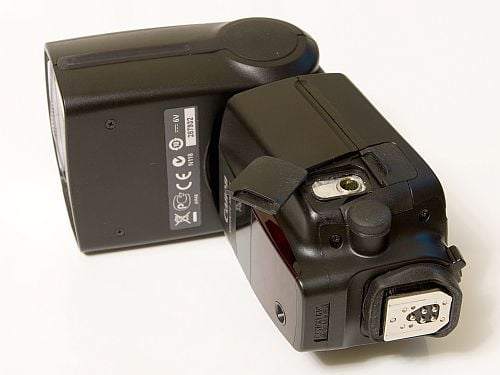 Basically, here’s the whole idea. We remove the high voltage port from the flash (along with a tiny PCB soldered to it, and its wire). Then we install a different connector, and inside the flash attach it to battery holder. Voila, the flash thinks the power comes from batteries, but in fact it does not!

Unfortunately, the mod on my flash is already done, so unless I get some other flash to work on (and I’m buying a used 550EX, so that’s gonna happen eventually) all I can show is the result and give some tips. 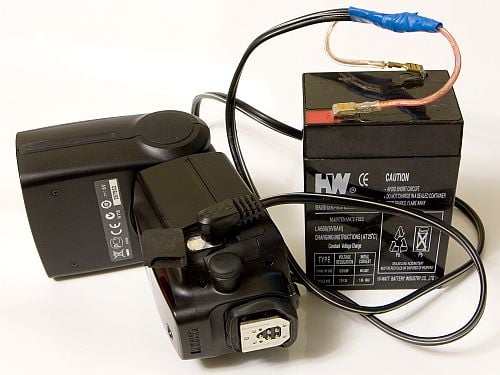 1. Don’t forget to discharge the capacitor.

2. To take flash apart you need to undo 6 screws. First, the four on the bottom, then two under the tilt-swivel head. To see them you need to swivel the head 90 degrees.

3. The unit is glued together with some weak glue, so you need to apply some gentle force to peel the two halves apart.

4. There’s one screw that holds the high-voltage port. Undo it and then push the port inside. It should easily come loose.

5. To make a replacement port you need some panel. It can be made from metal (aluminum in my case) or plastic. My suggestion is to first drill a hole of appropriate diameter to house a connector and then use a file to shape the panel.

6. Attaching the port. I glued the panel to the flash housing using superglue, but now I think that was not such a good idea because it’s irreversible. I suggest you put the panel in place and then fill the space around it using a hot glue gun. The hot glue can be easily removed if necessary.

7. Polarity. I suggest inside contact (tip) be connected to plus and outside contact (ring) to minus. That’s a pretty typical polarity.

8. Use wire cutters to remove excess rubber from the piece that covers the port.

9. Use thick wires to connect the battery. High current will make an unacceptable voltage drop across thin wires.

The External Flash Power That Will Last Till Hell Freezes