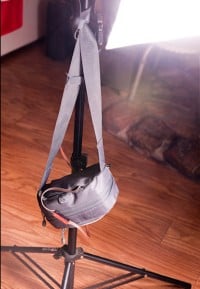 UPDATE: IanW has a good point in the comments that flashes can go thermal on you. He is right. Pop to hard and too fast and you will overheat. “Fire a flash too frequently with this setup and you will destroy it due
to overheating, unless it’s got a thermal cutout (most don’t).“

We write quite a bit about portable strobes. If you’ve been around for a while you may remember an older version of those strobes. The Sunpak family. While I have not used them myself (too young, sorry), those behemoth shoot at a staggering GN of 48 (meters) and have the look and feel to support it. That makes them ideal for sun swamped on location lighting. The nice thing is that they are old enough to be bought at ridiculously low prices second hand.

The following post about portable power source for small flashes (and Sunpak 611 in particular) is written by John Hagar (blog).

I’m not sure everyone is going to want to run out and buy some heavy, cumbersome, huge, old and generally PITA Sunpak 611 flashes after reading this article, but this page is really about the SLA (Sealed Lead-Acid) battery packs I use to power these hungry dudes. On full power, these flashes get maybe 10 good fast cycles on 4 ‘C’ batteries, and get slower from there. Even a $200 Quantum 1+ won’t run them very long either. 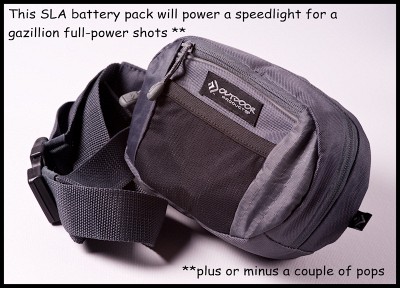 Since I use the venerable 1970’s 611 as a portable studio light, I need portable power that will last a while and not break the bank. Taking a cue from Al Jacobs, who makes the ‘Black Box’ alternative to Quantum batteries, I set out to make some cheap, durable and long-lasting SLA batteries for my set of 6 Sunpaks. This article is definitely not a slam of Al’s Black Box, which is a fine product from a fellow that provided the first really affordable alternative to Quantum’s overpriced (my opinion) and over-featured line of batteries. Al’s Black Box is a real “keep-it-simple-stupid” & well-built rig for anyone that needs to power a speedlight for a long time with fast recycles. He is also a great and witty writer/documenter of photography in general, and I recommend a visit to his site.

The advent of the new NIZN batteries might make SLA batteries seem pretty old-school, but it’s a valid choice if you want to avoid carrying around a pocket-full of AAs and changing them a lot, or if you have a really power-hungry flash like the 611. My Nikon SB-800s recycle from a full pop in about 2 secs. with NIZN batts.; same for my SB-25s. But, being an old fat guy, if my flashes are mounted 30’ feet above the floor on a scaffold, I don’t want to climb up and switch batteries very often. So, if you want to make an SLA setup, read on. 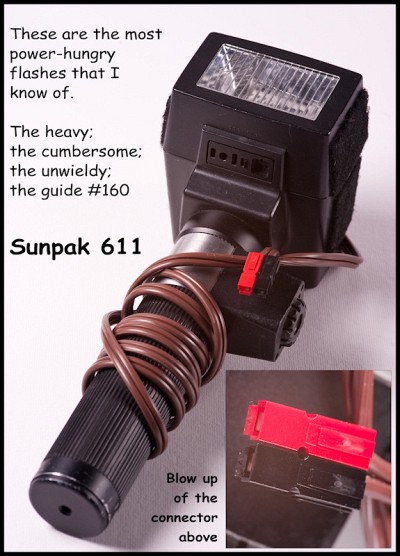 I use cheap fanny packs from Wal-mart to hold my SLAs. They can be carried on your waist, slung like a bandolier, hung on a lightstand or a clamp mounted to a ceiling beam, or carried around by your girlfriend. I used 12 amp-hour batteries for mine, so they are pretty big and weigh a couple of pounds each. My SLAs also have 3-4 times the capacity of a 3.6 ah Quantum 1+, much better connectors, can be modified with cord extensions easily and cost about ¼ the money of a Quantum. And, it is even easier to make smaller, lighter versions than mine for speedlights using 6ah (amp-hour) or 5ah batteries!

Another improvement over the Quantum 6v models is the connector I use. The Anderson Power-Pole has been popular with ham radio operators for years. This connector is simple, cheap, durable and easy to use. It is also polarized so it can’t be hooked up backwards and blow something up. The red/black colors are optional, so you “photo-stuff-must-be-black” guys can be happy and not have to get out the black spray paint for this DIY. 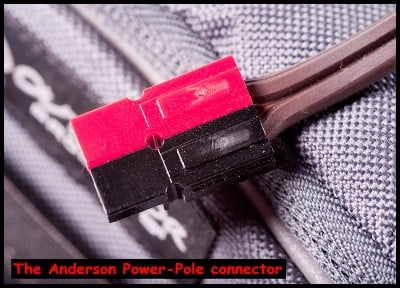 Anderson Power-Poles have been popular with amateur radio folks and others for years. I solder these connectors on to #16 lamp/extension cord. You can use smaller, more flexible wire than #16, but I use the big stuff to avoid voltage drop in longer cables. 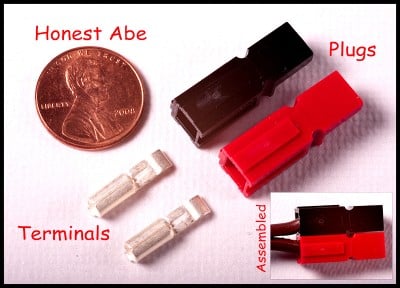 If you don’t/can’t solder, get a buddy to help – it will only take a few minutes. I also make 6’ extension cables with the Anderson connectors at each end in case I can’t mount the batteries near the flash. Above is a blow-up of the Anderson Power-Pole connector. The pos. and neg. plugs (red/blk) clip together. The wires are soldered into the terminals, which then just snap into the plastic plug(s). It takes me about 3 minutes to attach this rig to the wire ends. If you use lamp/extension cord, each conductor (wire) is different; there are ‘ribs’ on one side, so you can tell them apart. I always use the ribbed side as the positive to keep them straight

Here’s the SLA battery inside the fanny pack. The slide connectors (A) are crimped onto a 10-amp fuse in an automotive fuse holder (B). After the fuse, the wires are fed through a slit I made in the material, and feed out the back side of the fanny pack. The wires end in an Anderson connector, which plugs into the flash. I pad everything with blue closed-cell foam, and put some on top before I zip it up. Unless you blow a fuse, you’ll never need to open the zipper again. 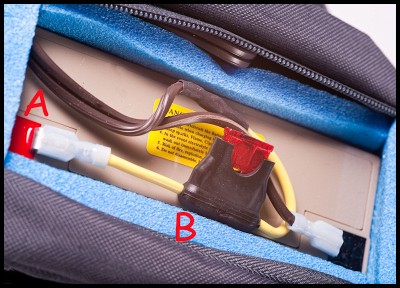 And here is a word of advice, DO NOT MAKE ONE OF THESE PACKS WITHOUT A FUSE! NEVER! EVER! SLA batteries provide enough current to melt your stuff down or cause a fire if the battery is shorted out. They are perfectly safe if fused/used properly. That’s it; ain’t rocket science!

You will need to make fake batteries (Al Jacobs’ apt term for an adapter that fits your flash) for about $3. Or, you can use a Quantum adapter that costs between $20 and $80 and just cut off the worthless RCA plug and put on an Anderson connector. I won’t do the DIY for adapters here, because it’s different for each flash model. You can search it out on the strobist Flickr group or elsewhere on the web. Below is a shot of the one I make for 611s. I cut the end off of whatever charger I use, and replace it with an Anderson connector so everything is Anderson-compatible. 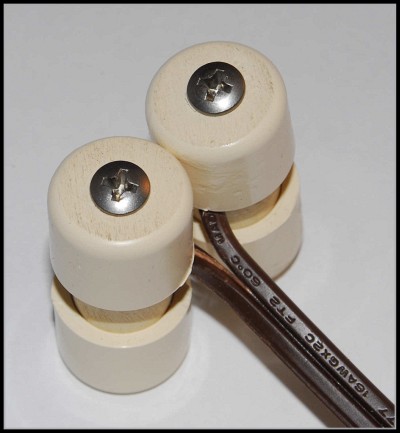 Now, I realize my exact setup is overkill for your SB-24, 430EX or most other small speedlights. My 12ah rig would power an SB-24 forever (maybe a little longer). I hooked a 611 up to mine and left it on the table for a few days. Every time I walked by, I mashed the test button for a full shot. After a week and 300 full pops, the battery was only half depleted. But you can go down to a 6 amp-hour battery (1/2 the size of this one) and a much smaller fanny pack. It’s a light-weight rig that you can use anywhere. Still ¼ the money of a Quantum 1+ and almost twice the flashes per charge. I would also guess that you can rival the cycle speed of NIZN batteries by going to a 7.5 volt SLA battery (same voltage as NIZN AA batteries).

Here’s a parts list with as many prices as I can remember:

I Made 4 of the large 12ah versions, including purchase of a very nice smart charger, for about $40 each, which is less than a single Quantum 1+ battery without the flash adapter. A smaller version can be made for around $25-$30. Here’s what it looks like hanging on a stand, and a setup shot for all the above pictures. 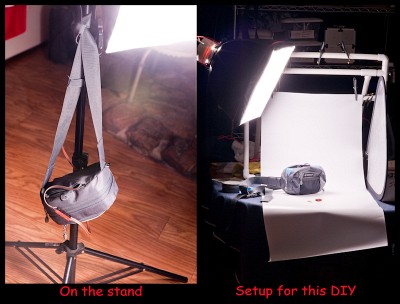 Some Fine Print: While I made a few of those SLAs with no damage to myself or any of my flashes, you need to be aware of the fact that batteries can be a dangerous thing if not handled properly. Wear Eye Protection When Working With Batteries Or Soldering. Consult with someone who knows their electricity if you are not sure about any of the components or process. I cannot, of course, assume any responsibility if you totally blow yourself up, burn the house down or completely singe your eyebrows. Also note that Sunpaks give out a huge current when they pop, and you may not want to use them on your new digital camera without some mediation.

Make sure you don’t miss out on the next article – Register to the RSS feed or the newsletter. Follow me on Twitter: @diyphotography.