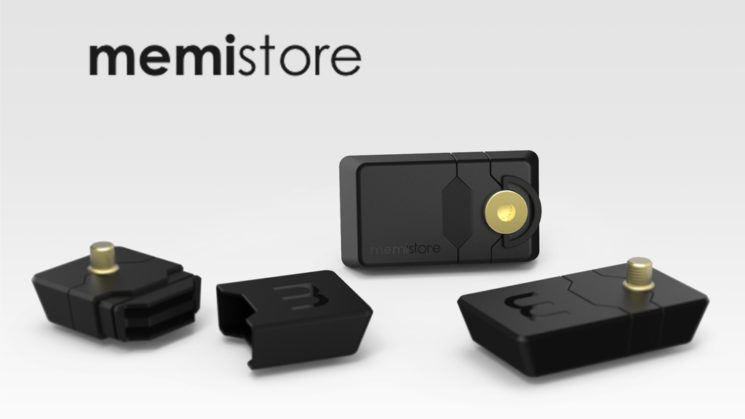 So this is an interesting idea I haven’t seen before. Called the Memistore, it’s an SD card “wallet”, of sorts. But it’s not like any others I’ve seen. This is a small unit that sits either in your camera’s hotshoe or screws into the tripod socket. The Memistore is being funded through Kickstarter. and has only just launched, so there are plenty of early bird specials for those interested.

The Memistore hods two SD cards and has a 1/4-20″ thread on top to screw into your camera, as well as a 1/4-20″ socket in the bottom. So, you don’t need to remove it to mount the camera on a tripod or monopod. A hotshoe mount adapter is also included.

It’s splashproof, and designed to be opened with one hand – presumably as your other will be holding the camera. And if you are tripod mounted, you don’t need to remove the camera to access it.

It’s quite a neat idea and seems pretty handy for more casual photographers, or light travellers. I do wonder, though, how practical it would be for professional use.

I usually take 4 cameras out with me on a shoot. Primary stills + backup, primary video + backup. Three of these cameras have dual card slots. I also take a waterproof memory card case with me that holds a dozen microSD cards (for action cameras, phone backup, etc), and a dozen regular sized SD cards.

The cost of that case was less than a single Memistore unit. But it’s just the way I’ve always worked. Storing spare memory cards in a holder in my bag. I don’t just have them loose floating around in my pocket as the Memistore campaign might suggest.

I do like the idea, though. It could be handy for when I’m out just doing family stuff with the camera and don’t have a ton of gear with me.

If you want to back the project and order your own Memistore, head on over to Kickstarter. The early bird prices are very cheap (starting at AUS$12 – a mere US$9), so you’ll have to be quick. After those go, the next cheapest are AU$20 (US$15), 50% off the regular retail price.

« Dear America, you do have to register drones with the FAA after all
Photographer shoots Star Wars toys with practical effects and a humorous twist »