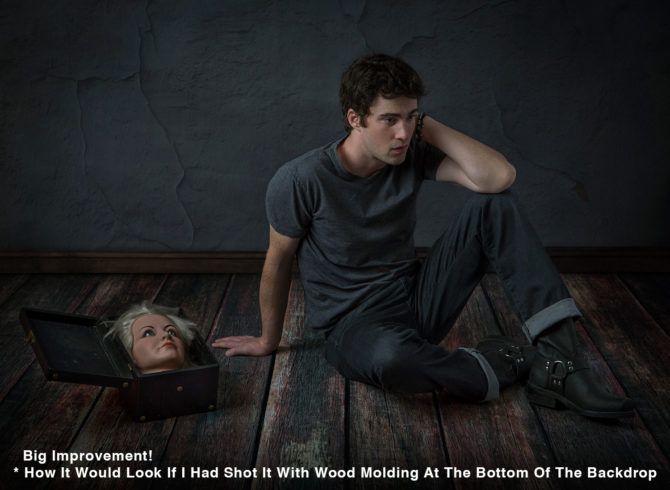 I just finished up a handful of promotional shots with actor Levi Fiehler and it went well. One of our shots was an odd editorial photo with a him sitting next to a head in a box.. because hey, why not?! I used a hand painted backdrop and a faux wood floor and I lit it dark and moody. I was happy with the way it turned out except for one factor. I wish it didn’t look like it was shot with a studio backdrop. If it looked like it was on location, the shot might work better. The only “giveaway” that it was done in a studio was the roll at the bottom of the backdrop. So I realized if I put a piece of wood molding along the bottom of the backdrop, it would look like a wall and a floor instead of a backdrop and a floor.

I headed off to my local hardware store and and got a 15 foot piece of wood molding and some dark wood stain. I knew my backdrop was 9 feet across and I’d want some extra on the sides, so I cut the wood molding to 11 feet. I then stained the front of the molding to go from a light pine to a dark chestnut color. That should look good along the faux wood floor. 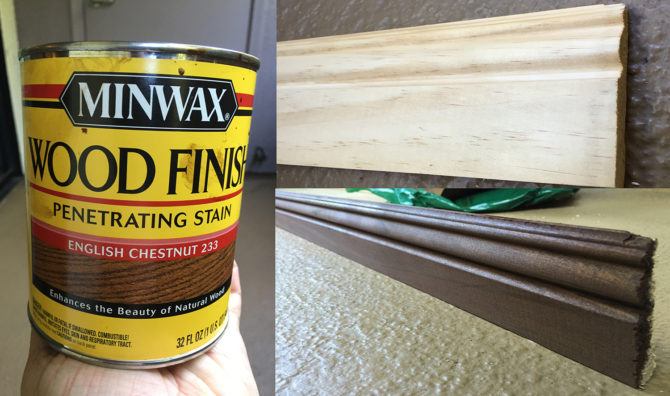 I cut six strips of 1 foot Velcro (both hook and loop sides for a total of 12 cuts) to space across the 9 foot backdrop. I rolled out the backdrop flat on the floor so I could work with it, and I placed the wood molding along the bottom of the backdrop. I could have done it in one long strip of Velcro across the backdrop and molding, but it would be more difficult every time I wanted to attach or remove the molding to the backdrop. 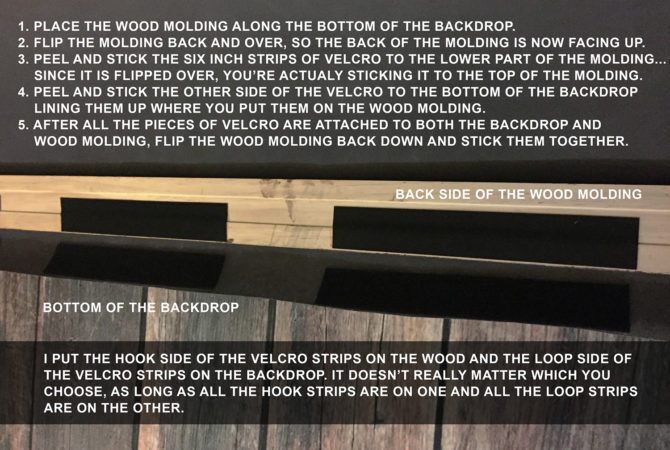 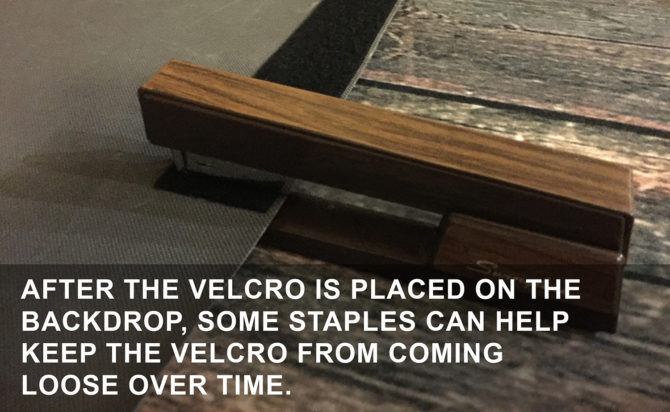 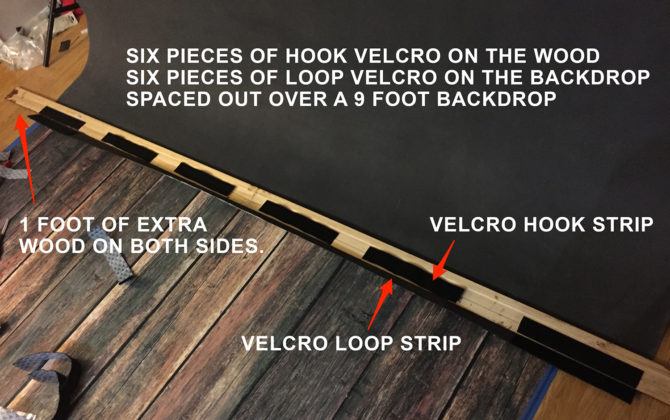 The extra foot of molding I left on both sides (9 foot backdrop, 11 foot of wood) are so sandbags can hold the bottom of the backdrop down, tight to the floor. Since long pieces of wood tend to bend a bit, I also added a little sandbag in back of the backdrop to nudge into place to make sure the wood and backdrop looked flat from the far left, in the middle and far right of the backdrop. I used the backdrop stands to adjust any slack out of the backdrop on each side. 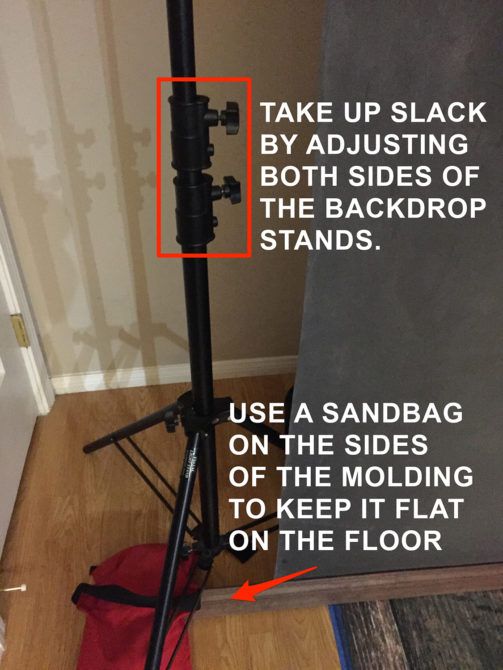 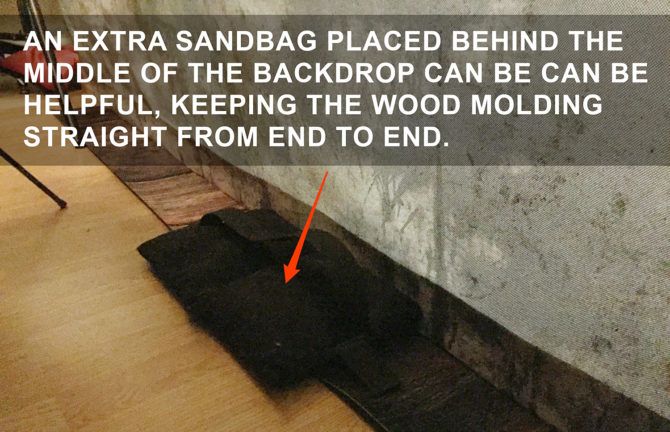 It was a bit of work figuring it out, but now that the wood molding is stained and has the hook side of the Velcro attached to it, I can now simply add six pieces of the loop Velcro to bottom of other backdrops, and attach them to the same molding so they too can like a wall instead of a backdrop.

And if you wanted an interactive comparison: 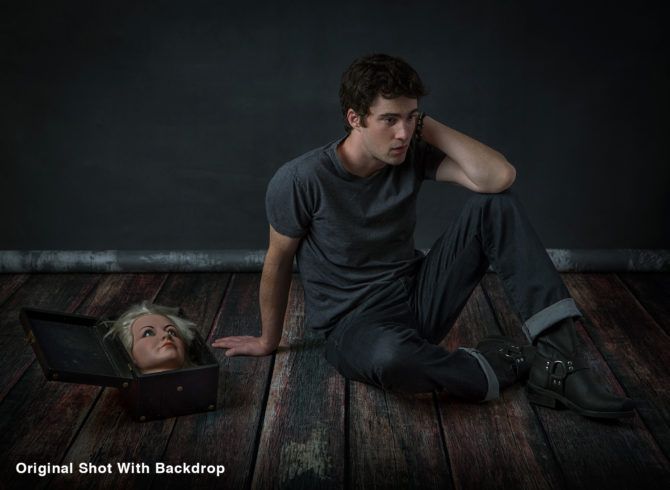 Here is a shot of the two light set-up. I used an Paul C Buff Einstein with a 60 inch Photek Softlighter II and a Paul C Buff X1600 pointed at the ceiling to use as ambient fill. I placed a 2 stop black double scrim at the bottom of the Softlighter II to cut some light off of the floor and placed an 8 x 8 foot large V-Flat on the opposite side for a little bounce fill. 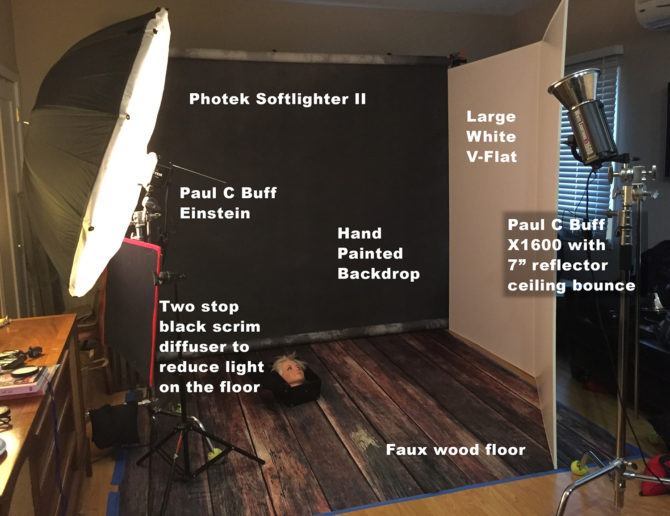 Lastly, in the mock-up shot where I added in the wood molding, you’ll see I added a cracked paint texture to the wall to match the weathered look of the floor. I think it’s all a big improvement over the original shot, and it’s a little trick I’ll use a lot in the future.