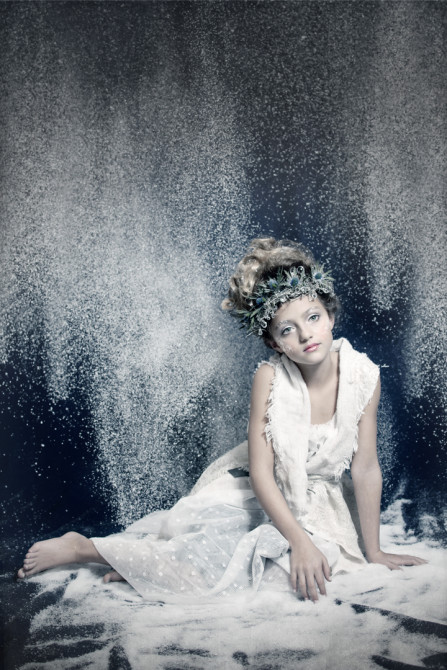 I met Sarah and her mom earlier on Facebook. They responded to a previous casting call.

We had worked together on a real fun shoot and Sarah, her mom and me were talking about some ideas that would be fun to work on next. Christmas time was coming, so we thought a winter theme would be fun.

After a Pinterest inspiration search we came up with the main idea and some inspiration photo’s to work off. Here are the key words I used: Frosty – Snow – Snow Princess – Ice Queen. (Pinterest provides great inspiration for the brainstorming stage but this is a different post :) ) 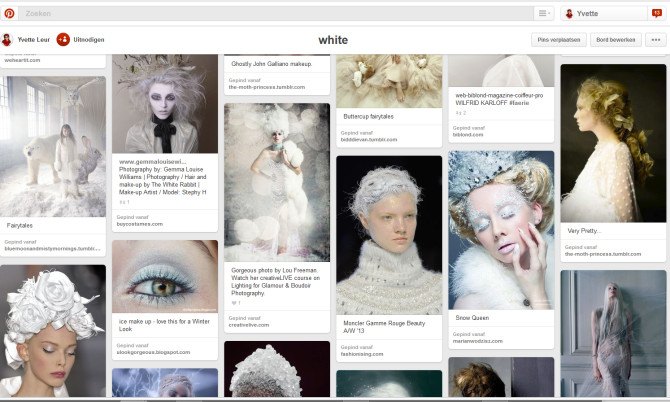 I wrote down the main idea and sketched the make-up and hairstyling ideas. I wanted to build a crown with icicles and put sort of frosting on the girls skin.

At this point, I realized that there would be some issues I need to figure out before going ahead wit the shoot. I always want to be extra careful using make-up on a child. Of course, I asked the mom if she would be OK with using hairspray and make-up on Sarah, and I always ask the model (or in case of children her parents) if she has any allergies or things I have to keep in mind.

For my frosting idea I asked some MUA friends for advise “How do I make believable ice crystals on the face of the model?“; “What is usually used in the industry?”. And I was not happy with what came in. Here is the challenge: I wanted to use something that REALLY looked like Ice crystals on the little girls face, but, on the other hand, Sarah being a young girl, I did not want something containing glass of hard plastics that the make-up artists suggested.

I came up with another idea: to use sugar frosting (the type normally used for cup cakes). It did not scratch or went sticky, so it was perfect to use on the models face.

Next was a little trip to the garden center where they were having a Christmas Sale. I looked for ornaments I could use to build the Ice crown. I grabbed some plastic icicles, blue thistles (because I thought they looked like Ice crystals), some moss and also some plastic fake snow.

At the fabric market I bought some white fabric leftovers (small pieces). Back home I started wrapping these fabrics around a mannequin I usually use for draping fabric, just to see what sort of shapes I could come up with. 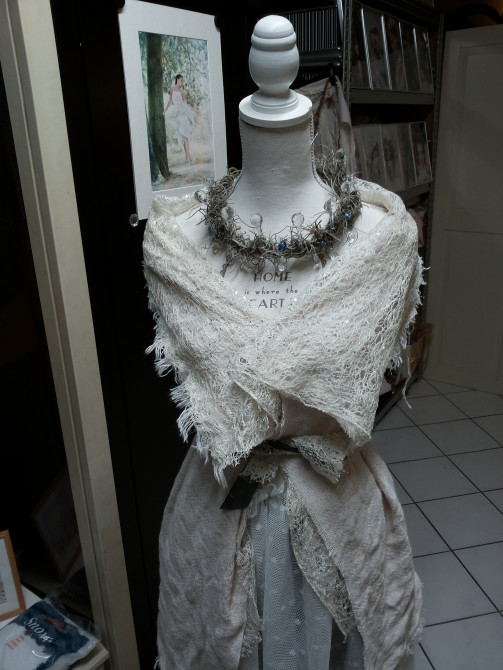 I made the crown using the icicles, some beads, wire, blue thistles and moss.

When little model Sarah arrived with her parents, I started by curling the models hair, did the make-up using a lot of whites and blues in the eye shadow and put the sugar crystals on her eyebrows and cheeks using some lash glue. Sarah thought that the glue smelled really, really bad and we had some giggles about it.

The clothing was just the scraps of fabrics I bought. In one of the fabrics I put arm holes and the rest was just pinned at the back with safety pins.

Location was an easy one. We used the front of my living room. I have a advertising pillar that is usually used for events and stands, so I attached a background to it with some pincers. For this shoot I used a dark blue fabric. 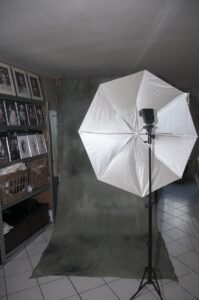 There are pros and cons to using your living room as a shooting location. The main plus, is that you don’t need to rent a studio. The main con is… Wait till you hear about the snow bit, it will be crystal clear :) 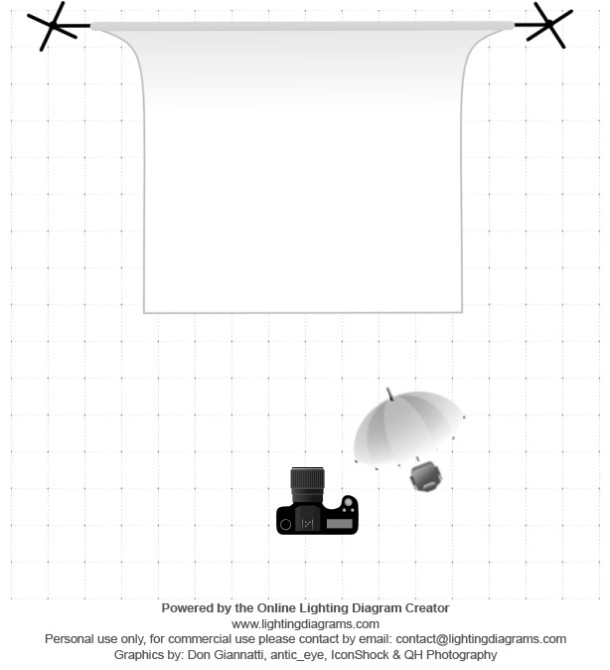 The light set up was really simple. One Lumopro flash of camera on a light stand trough a white umbrella. Placed on the left side of the model. This provided a great classic key light, while spilling just a bit on the backdrop to show the blue. I used a simple radio trigger to connect the strobe with the camera. I used my Nikon D300s with a 35mm Nikkor lens. (settings were: F2,8 – 1/250 @ ISO 100)

Then the fun started.

Both parents joined the set to make it snow!

They were standing on each side of Sarah. With their hands filled with the fake snow, I asked them to, on the count of 3, throw the snow in the air behind her. That turned out to be a lot of fun and the effect was just perfect.

We did have to try this a couple of times, picking the snow back up from the floor to use it again and again. This was needed to get the perfect shot… and because it was a lot of fun.

Sarah has a lot of experience modeling so I only had to explain her shortly that I wanted her to look a little dreamy, like she was thinking of something beautiful, and she acted out what I wanted just perfectly.

We did some portrait shots and some playing with the fake snow. We were ready shooting the ice princess pictures within one hour.

Was done with Photoshop CS5. 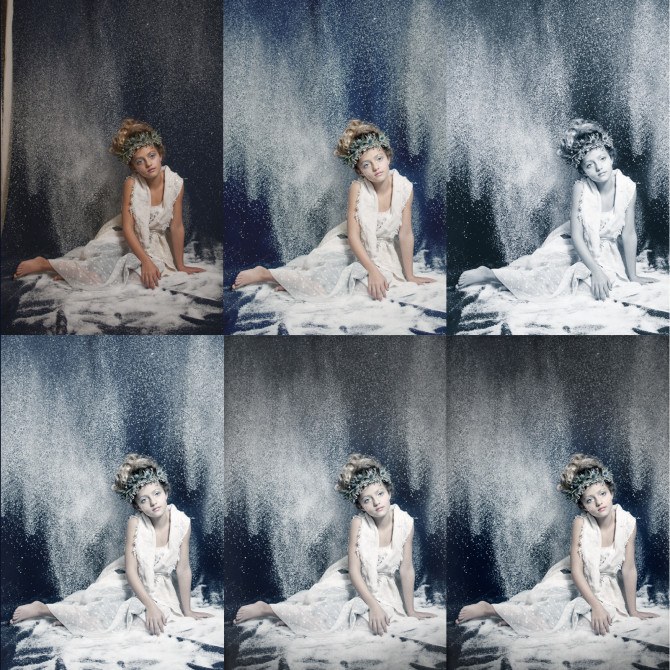 There was little to no blemish to clean up. I used dodge and burn to highlight the eyes, cheeks and all the places where the light would normally be brightest.
I copy and pasted some of the snow from other shots.

I love fading out some of the color in my pictures and I use Duotone for that.

I duplicate the picture, use a color shade to replace the black, in this case I used blue and copy that layer back over the original. I change the opacity until I am pleased with the overall look and color. Then I bring back the color of the eyes, lips and cheeks. In this picture also the blue of the thistles.

I used curves to brighten up the picture and the burn tool to make the edges of the frame darker.

This was a really fun shoot and everything went very smoothly. Always remember when working with children. Prepare, give good information and instruction to both the parents and the child and…. allow yourself to have some fun!

After the shoot, I gave Sarah the crown to take home.
Her mother later send me a picture of Sarah wearing the crown at home. She really liked it and told her mom she had a really, really fun shoot.