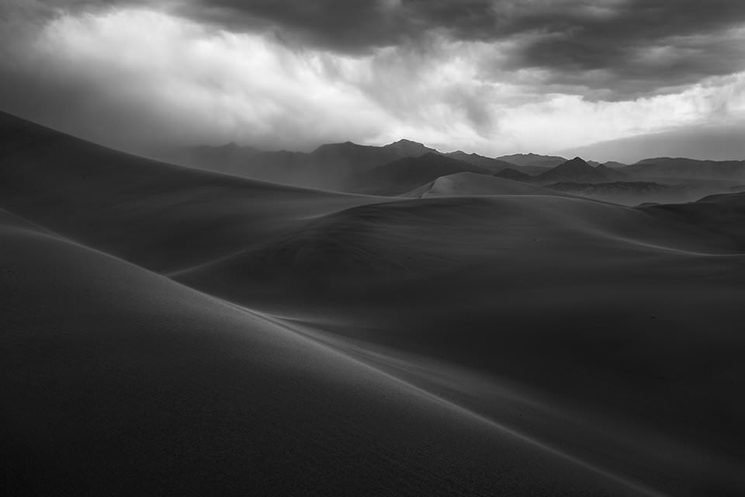 One of the windiest nights I’ve ever taken pictures turned into perhaps the single most rewarding — and frightening — landscape photography experience of my life. I was on the Mesquite Sand Dunes in Death Valley, a place I had visited twice in the past, though under much tamer conditions. This night, the gusts of wind were far greater than I had seen before, and they kicked up a layer of sand that made for amazing sunset photos. But as the day came to a close, it was clear I had entered uncharted waters.

Even before sunset, the wind was fairly heavy. Sand stung at my feet, but it wasn’t any worse than a breezy day at the beach. I had a scarf over my nose and mouth to avoid inhaling too much dust, and I wore sunglasses to protect my eyes.

It was a beautiful sunset. The clouds were something special — patchy, orange, blue, and dark. The atmosphere was perfect for photography. Over the course of an hour, I made a series of mad dashes from dune to dune in search of the best composition, and I captured a handful of shots I liked along the way. The whole time, in the distance, one dark cloud was lower than the rest. Although it stood out somewhat, I filed it away in the back of my mind as I focused on capturing other parts of the landscape.

Soon, the day had ended. The sun dipped out of view, and the light began to fade even further. I saw, then, how far I had traveled. I was already at the tallest dune, which rose next to me in a gentle slope. The best colors in the sky had ended, but I decided to climb this last peak to see the view before turning back for the night.

That was when the air began to change. The low, dark cloud I noticed earlier had grown much closer, and the reality of my situation became obvious: This was not a typical low-hanging cloud, but, instead, a sandstorm. The wind picked up in powerful gusts, and I took a photo.

For half a second, everything was completely still. The sky dimmed and turned dirty. I started to hear sifting noises, and a thin layer of dust fell on my shoulders and backpack.

When the wind picked up again, much faster than before, it was a completely different world. I stood looking ahead, unable to see the next dune in any direction. As the atmosphere thickened, darkness fell rapidly. I pulled out my flashlight, which illuminated swirls of sand racing through the air.

After bracing myself into the ground, I went through the inevitable safety checks. Was my GPS still working? Check. Did I have enough water to last the night, in case of a true emergency? Check. But even then, it’s hard to feel completely safe at a time like this.

The storm didn’t seem natural. Or, instead, it seemed too natural. The power of the wind and sand was overwhelming. If you want to feel completely helpless in the face of the world’s chaos, get lost in a sandstorm.

Of course, I wasn’t truly lost. The GPS had found a path back, pointing to where my car sat in the distance (though I no longer saw it, or the road). I started moving in that direction.

It soon became apparent that my progress was slow. Indeed, I thought I was walking in circles, despite following the GPS’s recommended route. To be clear, it didn’t just seem like I might be walking in circles. I truly believed I was going around the same sand dune over and over, retracing my own footprints as the wind blew them away.

Especially in a situation like this, I am inclined to trust technology. I know that a GPS is far more likely than a clueless photographer to pinpoint its location in a sandstorm. But I was thankful to have packed along a backup GPS, which I pulled out now to calculate the same route — sending another signal to perfectly-placed satellites flying thousands of kilometers overhead. When that, too, confirmed the same path, I knew to stifle my intuition and follow the light back home.

To describe the rest of the hike, the best comparison I can make is to say that it felt like walking on an ocean. I would climb up a dune, shine my flashlight ahead, and then step down into darkness. And this repeated itself for an hour — up, down, up — on waves of sand.

Then, suddenly, I was at the car. I threw my backpack on the back seat, climbed in, and closed the door.

And that moment was absolutely eerie.

The constant push of wind and sand suddenly stopped; even as the car shook in the breeze, it felt like everything was absolute silence. The dim glow of the reading light overhead seemed like the only island in the entire world.

I was back — back to a refuge from the relentless wind and sand. I was also back to civilization, where, surreally, the nearest town was a five minute drive away.

The fact that I could order a burger moments after I had been inside of new sand dunes forming was amazing, and deeply unsettling.

Writing this, I’m on the third floor of a huge building with glowing lights, and, a few hundred feet away, tall waves are crashing ashore. It’s nighttime, and there is a light drizzle. Heavy winds are whipping around. A car just drove past.

We’re living in shelters that we created at the doorstep of a storm, and it’s so incredibly difficult to remember that. It shouldn’t take an otherworldly night of photography to put things like this into perspective; it should be at the core of who we are.

Landscape photography is a strange art. I’ve realized that my true motivation for taking pictures is not to create beautiful images. Instead, it’s to be out there — walking into a sandstorm, surrounding by waves of dunes — to watch the planet change so spectacularly.

Spencer Cox is a landscape and travel photographer from Franklin, Tennessee. To contact Spencer directly or view more of his work, visit his website or follow him on Facebook. This article was also published here and shared with permission.

Slow Down – Capturing A Great Photograph is Good For The Soul