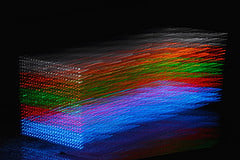 If you’ve been following the blog for a while you know that there are some neat iPad/iPhone apps that create spatial drawings, like Holographium or Aurora Bulb for Android.

Wulfrano Moreno shares on how he achieved a similar project using Peggy, an Arduino-based LED PegBoard.

Taking the photograph above required a combination of several skills: A bit of electricity engineering, some open source enthusiasm and a bit of light painting know how.

This image evolved as I started experimenting with light painting.  At first I started creating some shots using the typical DIY “orb tool”. As I got more drawn to the subject I came across an amazing video of some guys light-painting using an iPad.

My first reaction was: “Ok, now I have a good reason to negotiate with my wife for the new cool gadget in town”. But then I realized I could make something of my own using an Arduino board and a LED based board. I wanted to use the Arduino to program the light sequences that I wanted for my shots.

Unfortunately, my electronic knowledge was a little rusty. Luckily for me, the guys at Evil Mad Science came with a good solution for my predicament, a DIY kit known as the Peggy, a light emitting pegboard that you can program using Arduino. 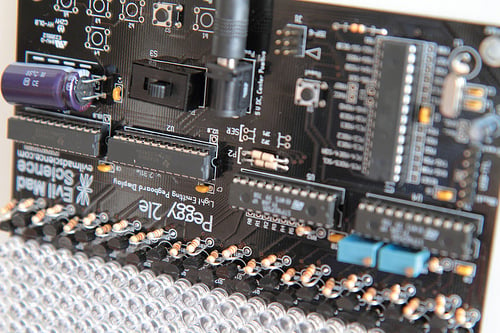 The next step is to solder the LED with your desired color matrix. Now, this is 625 LEDs we are talking about so be prepared to do some soldering work. (specifically I went with a mix of 5 color stripes – white, yellow, green, red and blue –  using ultra bright LEDs. 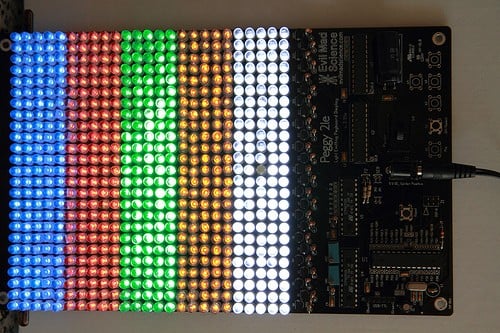 [geek note: The Peggy can be assembled to have a semi RGB configuration, see the video here].

The next step is to transfer an image from your computer to the Peggy. This is where it gets ultracool. (ultra cool, if you are into that kind of things, of course). You don’t need software engineering skills to do this. You can use PeggyDraw2, a free software tool that runs on the Processing development environment.

The Programming Process In A Nutshell

The first step is to install Processing (though I would suspect that if you got this far, there is a good chance it is already installed on your computer.

Next execute PeggyDraw and select the Pixels for each frame and the number and duration of each frame for the light painting process. One you are done, PeggyDraw will generate the Arduino code for you. Yea, it is a bit manual. Let see if anyone picks the glove and contributes automating code for that.

Lastly, program Peggy using the Arduino IDE, and you are good to go.

I know this may look complicated, but the truth of the thing is that this is way simpler that it looks once you start doing it.

– The number of frames you can store on the Peggy is only limited by the amount of memory that you have, and while that means you can stack up lots of frames, the programming of those may prove a bit tedious, we recommend using about 5 frames for simple light painting.

– Time how long it takes you to move the peg board from side to side, this way you can time how long each frame should be.

– All the regular light painting rules apply – get a tripod, set your camera on long exposure and operate in darkness.