Recently I was involved in a video production for the DIY Lighting Kits that demanded synchronization between a large number of participants. Well, that is usually the case right, you have the photographer (or more than one), the editor, a retoucher sometimes, a sound man,  and a client. It can get even more complex if you have even more stakeholders to the project. how do you sync them all? In this post, I want to share my personal experience with Dropbox a semi-free file synchronization solution. (Here is my personal subscription link, if you sign up through this, both you and I get some extra space)

Before diving into the technical solution a few words about projects. The ability of ad-hock teams to organize like this to meet a project creative goals and deadlines is truly amazing. Only a few years back it was not really possible to work with a scattered team like this unless you were working for a big organization with a pricey network and expensive servers. For me this means freedom. Freedom to hire better craftsmen regardless of their physical location. Freedom to interact faster and on a deeper level with fellow photographers, and freedom to put my efforts into my core business rather than deal with bureaucracy and technicalities.

When a big group works on a project files may have to move around. Sometimes (like in my case) there was a very clear path of how files had to move in order to complete the project. I our case it was a short clip made with still images.

It all started with a script. The photographers (me included) were handed with assignments and went off to work. The first step was to get the director’s approval for the shot. Once approved, the processed version of the file went to the editor.

The editor received the pictures and sound files and edited it down to a video clip. Sounds easy, right? Here is a chart to help visualize the flow of things. 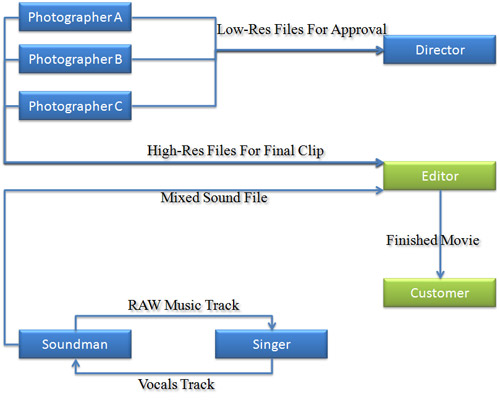 If all stakeholders belong in the same firm or to a closely located group this may not be something even worth discussing. Portable hard drives and thumb drives may be enough. But for the project in question, we were a team scatted in three different countries with multiple locations in each country.

When I was working in the software industry, this was no issue at all. One team “checks in” a file at location A, and the other team almost instantly sees it in location B. This was done via a piece of software called clear case. The overhead was enormous. There were a few servers on my facility, a few on the remote location. A dedicated DBA to handle the configuration and needs for the different teams. All and all it is a solution that works great, but demands a huge overhead.

Dropbox is a file sharing application. Once you upload a file to Dropbox, you can access it from any device that has internet connection. It is possible to access your files and folders with a browser, but I want to discuss one of the different options Dropbox suggests which is integration with the operating system.

One of the features of Dropbox is to install a piece of software on your computer ( a client) that opens a Dropbox folder in your “My Documents” folder. that folder is always in sync with your Dropbox content, so when you drop a file in that folder, it is automatically uploaded to Dropbox and when a new file or folder is shared in Dropbox, it is automatically downloaded into your computer.

Dropbox can also share selected folders with a group of people, so for instance you could share your “project A” folder with the group of stakeholders for “project A”.

If they have the client installed on their computer, the files you upload will “magically” appear in their Dropbox folder.

How I Manage Files In Dropbox

I have two ways of managing files in drop box – people based and project based.

Here is a partial snapshot of my Dropbox folder.

As you can see, for each person I work with I have a base folder. all sharing of data with that person is done via that folder. As you may have noticed, each folder has is build from my name and the name of the other person. This convention makes sure that the folder has a meaningful name on the other persons Dropbox. Otherwise, it would just be “cars” or “dogs” or something like this. I may still have a folder names dogs, but it will reside inside the specific folder for that person.

Managing A Project In Dropbox

For projects I take a slightly different, yet similar approach. Each project gets a dedicated folder. that means that all communications for that project happen inside that project folder. It may sound trivial but keeping to this simple method really helps keeping your folders in orders.

Dates based folders – for stuff like daily shots that were sent to the director for approval, or any other accumulative task I use daily folders, those have the format of YY-MM-DD and they keep the daily work done on that date for all the project stakeholders to see. You can have further breakdown in each folder. Those files are not deleted till the end of the project.

Task based folders – task based folder or delivery folders are folders that represent a task in the project, say the raw selected still for the video, and can accumulate over time. Good examples for those are Soundtrack, Raw Stills and Edited Stills. I usually do not deleted those files either till the completion of the project.

Upload Speed – While Dropbox files appear almost instantly on your computer when shared, it may take a long time to upload them. Sadly most internet connections are not symmetrical and upload is slower than download. Take that into account when deciding on who uploads files and when you need them.

If you have not seen this already, sit back and enjoy

None worked as seamlessly as Dropbox, if you have any good/bad experience with it, I would love to hear about it.

Dropbox Just Deleted 2000 Files Because of My Samsung Phone

Quick tip: How to manage your memory cards on events

Photographers, manage your ego if you want to grow as artists