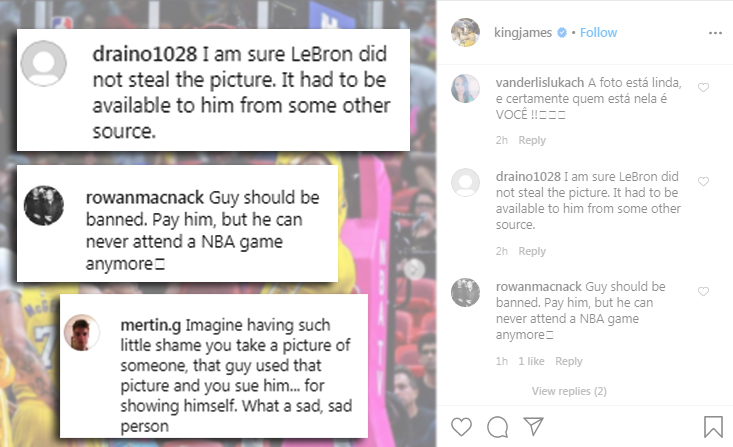 After Gigi and Bella Hadid, Jennifer Lopez, Kim Kardashian, and Ariana Grande – NBA superstar LeBron James is also being sued for posting a photo of himself to Instagram. One would think that it was an expected move from the photographer, right? Well, comments from LeBron’s fans, are angry with the photographer, show that this isn’t really the case.

As The Blast writes, the photographer who filed the lawsuit is Steven Mitchell. He is a photojournalist who licenses his images, and his lawsuit claims “unauthorized use” of his image of LeBron dunking in a game against the Miami Heat. So, Mitchell reportedly suing LeBron James and his companies Uninterrupted Digital Ventures and LRMR Ventures, LLC. for $150,000. The photo was posted to LeBron’s Instagram and Facebook back in December 2019, and surprisingly enough – it’s still there.

Since the photo is still on Instagram, you can see how LeBron’s fans have reacted to the news that he was sued over it. As I mentioned, it seems expected to get sued if you use a copyrighted photo without permission or without buying it. However, they all seem to be pretty bitter about this, and pretty mad at the photographer. These are some of the comments:

I understand fandom, I really do. But I still expect to see some common sense and critical thinking. The photographer is not “a sad, sad person,” but someone who had his work used without permission. It’s logical that he seeks damages, and it’s pretty common, actually. However, it looks like many people aren’t aware of how copyright works. Or they are, but the devotion to their favorite stars is simply stronger than any common sense. Either way, I am pretty surprised by these reactions, whatever was their cause.