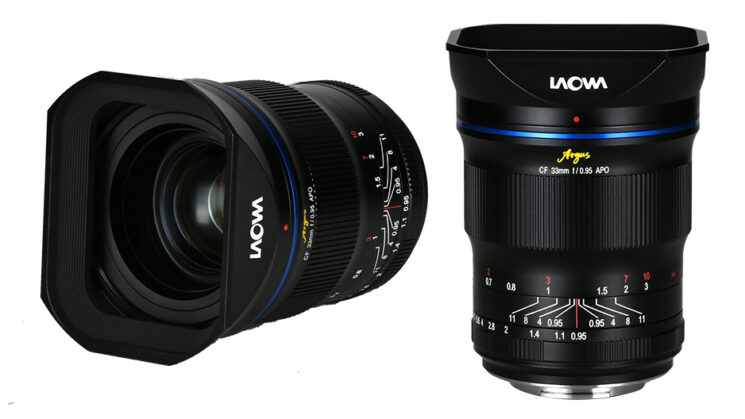 This whole Laowa Argus lens lineup thing’s been a bit of a ride. The first indication that they were coming was back in January last year. In March, rumours appeared of six new lenses coming, to be expected in 2021. In December, an image of a 35mm f/0.95 was leaked. And in January this year, it looked like the whole lineup might have been announced. Nope, it was just confirmation they were coming.

Now, though, the first Laowa’s Argus line is absolutely, 100% guaranteed, officially announced. The Laowa Argus 33mm f/0.95 CF APO is now a real thing, and it’s even on the Laowa website. Hold back your excitement a little, though. This isn’t one of the full-frame Argus lenses many have been anticipating. It’s for APS-C.

Still, f/0.95 on an APS-C lens is impressive, even if it is a manual focus lens. If offers a 35cm minimum focus distance, internal focusing with a long focus throw and low focus breathing for the video shooters along with a stepless aperture ring. It has an apochromatic optical design which Laowa says provides minimum chromatic aberration, even wide open at f/0.95.

Laowa touts the wide aperture of the lens cover everything from creative portraits and videography to practical low light photography and astrophotography. I’d be keen to see how sharp this lens is wide open for astrophotography. That wide f/0.95 aperture definitely allows for a shallow depth of field, comparable in field of view and relative depth of field to a 50mm f/1.4 on full-frame.

They say that they really worked on minimising the focus breathing with this lens, specifically for filmmakers that might need to rack focus mid-shot. There’s a brief sample in the video above where it’s demonstrated and it does look rather impressive.

The Laowa Argus 33mm f/0.95 CF APO is available to pre-order now for $499 from the Venus Optics website in Fuji X, Sony E, Nikon Z and Canon RF flavour. The Fuji and Sony versions will begin shipping early this month (they may be shipping already), while the Nikon and Canon ones will ship from mid-May.

« Samsung sued over “shattering” cameras in the Galaxy S20
Is wet plate photography dangerous? Well, yes, it is »