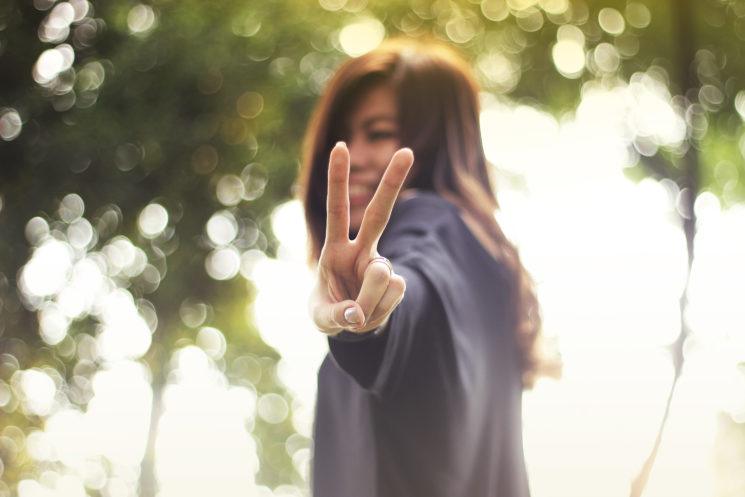 Japan’s National Institute of Informatics (NII) recently warned the public about taking and publishing photos with popular two-fingered pose. They claim that flashing “V” sign in photos may lead to your identity being stolen. The reason is that fingerprint recognition technology became so advanced and widely available, that a simple snapshot of a person holding up the “peace” sign may lead to someone stealing their identity.

NII warns about two main potential dangers. First, quick development and availability of modern cell phones with high-quality cameras. And second, the rising number of social media websites where you can easily post photos. These two combined may lead to a large number of identity thefts using only your photo and your fingers in it.

The researchers tested their claim by trying to copy fingerprints from photos taken by a digital camera. They were able to scan them from the photos taken 3 meters (9 feet) away from the subject. So, technically, if you flash the “peace” sign in the photos, your fingerprints and identity can be stolen. NII researcher Isao Echizen warns that the thieves can recreate your fingerprint data if your fingers are in focus and lighting in a photo is strong. He also warns that advanced technology is not necessary, but anyone can do it.

But, it’s nice that NII isn’t only pointing out to the problem, they are also offering solution. They have developed a transparent film you can attach to your fingers and hide prints. It contains titanium oxide and prevents anyone from scanning your fingerprints and stealing them from the photos. At the same time, it doesn’t interfere with identity verification.

Unfortunately, this technology will not be ready in another two years. So, if you want to send the message of peace through your photos by raising two fingers, you should reconsider it. Or at least wear gloves.

« Top three photography business housekeeping tasks to get done the first month of 2017
The artist combines matte painting, collages and photography to create composites with reality of their own »