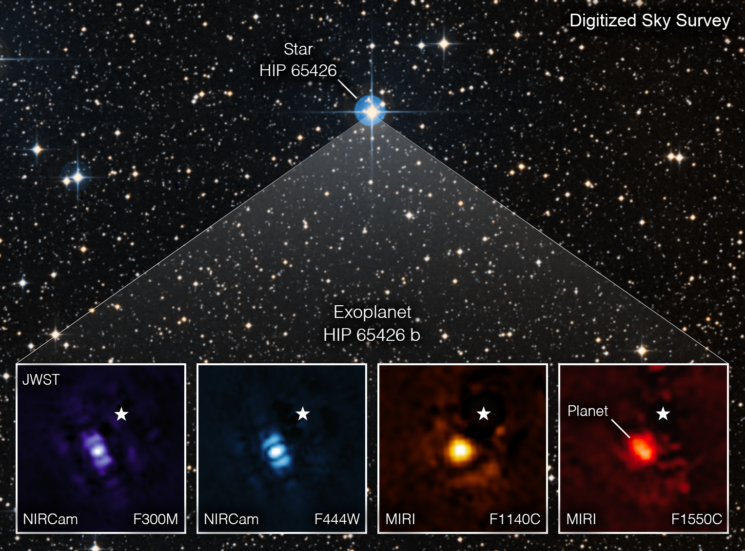 Astronomers have used NASA’s James Webb Space Telescope to take a direct image of a planet outside our solar system for the first time. The planet is a gas giant, which means that it has no rocky surface. Like Jupiter and Saturn in our own solar system, it means that the exoplanet is most likely uninhabitable.

The image shows the planet in four different bands of the infrared spectrum. The exoplanet has been catchily named HIP 65426b after its host star the HIP 65426. The planet is much fainter than its star, and scientists had to block out the light from the star before they could see the planet.

The planet is more than 10,000 times fainter than its host star and about 100 times farther from it than Earth is from the Sun (~93 million miles), so it easily could be spotted when the telescope’s coronagraphs removed the starlight.

Scientists predict that the planet is only 15 million to 20 million years old. That’s young compared to our 4.5-billion-year-old Earth. From the data, they also believe that the planet could be between six and 12 times the mass of Jupiter. Once they have more data available this prediction will likely become more accurate.

“This is a transformative moment, not only for Webb but also for astronomy generally,” said Sasha Hinkley, associate professor of physics and astronomy at the University of Exeter in the United Kingdom, who led these observations.

Webb’s Near-Infrared Camera (NIRCam) and Mid-Infrared Instrument (MIRI) are both equipped with coronagraphs, which are sets of tiny masks that block out starlight, enabling Webb to take direct images of certain exoplanets like this one. Since HIP 65426 b is about 100 times farther from its host star than Earth is from the Sun, it is sufficiently distant from the star that Webb can easily separate the planet from the star in the image.

“Obtaining this image felt like digging for space treasure,” said Aarynn Carter, a postdoctoral researcher at the University of California, Santa Cruz, who led the analysis of the images. “At first all I could see was light from the star, but with careful image processing I was able to remove that light and uncover the planet.”

“I think what’s most exciting is that we’ve only just begun,” Carter said. “There are many more images of exoplanets to come that will shape our overall understanding of their physics, chemistry, and formation. We may even discover previously unknown planets, too.”

« Wildlife Photographer of the Year reveals stunning most commended photos of 2022
TTArtisan announces 25mm f/2.0 APS-C lens and it’s only $55 »