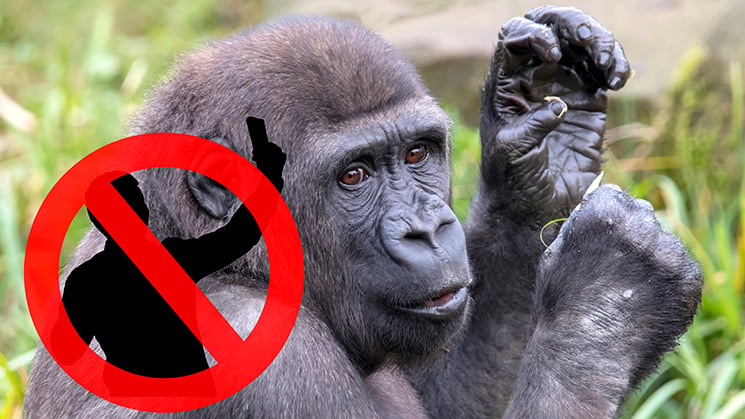 The chase for likes on social media brought us many irrational and dangerous behaviors. One of them is approaching wild animals in order to take a selfie. According to a recent study, selfie-takers are getting too close to wild mountain gorillas to take selfies with them, transmitting COVID-19 and other diseases to the animals.

A team of scientists from Oxford Brookes University in England conducted a study on a sample of 18,000 photos Instagram photos. They focused on the hashtags #gorillatrekking and #gorillatracking and the photos posted between 2013 and 2019. Out of 18,000 images, there were 858 that had people’s selfies with gorillas.

A post shared by ANIMALS AROUND THE GLOBE (@animalsaroundtheglobe_official)

The recommended safe distance between humans and gorillas is 7 meters (around 23 feet). However, only 3% of the people in the analyzed photos respected this distance. Whopping 86% of images showed tourists within a critical 4 m of the gorillas, with 25 cases where tourists even had physical contact with the animals.

The study also showed that women take these selfies more often. In addition, it’s more common to see immature gorillas in selfies than adult ones. According to the study, “the mean distance between human and wild gorillas decreased by ~1 m between 2013 and 2019.”

So what urges people to take selfies with rare wild animals? Well, I guess we all know an answer to that. “The popularity of photograph‐based social media may stimulate closer contacts and influence people into risky behaviours,” the study reads. I’d describe it as “monkey see, monkey do.” People see this kind of photos in other accounts, so they want to replicate them and get some Insta-love, too.

However, as the study suggests, this kind of behavior is risky for both gorillas and humans. “These ever‐growing tourist attractions in the range countries pose risks of disease transmission in both directions between tourists and wildlife,” the study reads.

Just like you wear a mask around other people (at least I hope you do), you should also do it around animals. One of the researchers on the study, Magdalena Svensson, explained it further for Courthouse News:

“There are many reported cases where diseases from humans have been fatal for gorillas, and due to their close phylogenetic relationship with humans, they are susceptible to a wide range of infectious human diseases. The masks and distances are therefore very important precautions.”

She explained further that we can infect gorillas with several respiratory illnesses: Covid-19, SARS-Cov-2, and the viruses that cause the flu. There’s also a risk of transmitting gastrointestinal bacteria like Escherichia coli, and parasites like mites, which can be transmitted both ways.

Wear a mask and keep your distance – to stop the spread of COVID-19 and other diseases to wild mountain gorillas. Research by a team led by Gaspard Van Hamme @PrimConsOBU shows the need for greater care by tourists on gorilla trekking trips: pic.twitter.com/HqmHcenBa2

So, to repeat for the hundredth time in my life – stay at a safe distance from animals while taking photos. If you get to close and mess with them too much, you can hurt them, even kill them – or they can do it to you. Don’t do stupid and irresponsible things just to get likes, it’s not worth anyone’s life and health. After all, why not just take photos of animals from a safe distance? You don’t have to be in every photo you take, you know?