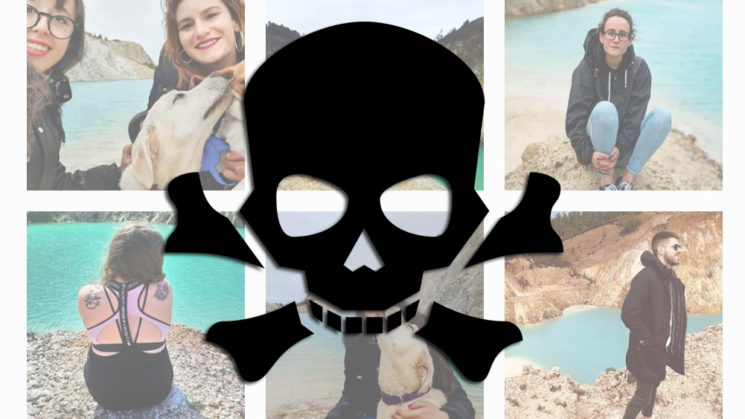 It looks as if toxic lakes are rising in popularity among Instagrammers and the latest hit is Monte Neme in Galicia, Spain. Several visitors have reported skin rashes and stomach issues after taking photos in the water. Some of them have even ended up in the hospital after suffering damage to their skin and digestive systems.

Monte Neme is the toxic waste dump of a tungsten mine which was reportedly used during the Second World War. The mine has been abandoned for years and the “lake” is actually a large hole full of contaminated water. But hey, the water has a wonderful turquoise color, and as we all know it, that calls for an Instagram photo!

Unfortunately, as we’ve already seen, some Instagrammers would do anything for likes. Therefore, some of them jumped into the waters of Monte Neme to get that “perfect shot.” According to Publico, one person reported that he started throwing up after taking a dip in the water, and had a rash later that lasted for two weeks. He added, though, that “the photo was worth it.”

Another person said that she “didn’t see the warning signs” and that she just had to take a dip because “the water looked very pretty.” She reportedly also ended up vomiting and with two-week-long skin irritation. Publico reports that more than one person even had to be hospitalized after suffering damage to their skin and digestive system.

Dr. Manuel Ferreiro of the emergency service of the University Hospital of Coruña explains that a short dip into this toxic water would not cause serious damage. You’ll most likely end up with eye and skin irritation (although, in my book, that’s still pretty annoying). If you spend more time in the water and swallow a bit of it, you will also face digestive disorders, vomiting, and diarrhea.

Of course, some memes have already appeared to mock the growing Instagram trend of taking photos at the Monte Neme.

Recently, there was quite a buzz around a similar “toxic lake” in Siberia. The company which runs the coal plant associated with the lake had to issue an official warning for tourists not to swim in the water because the plant uses it to dump toxic waste.

So, dear people of Instagram, if you find a body of “pretty turquoise water” and it looks too good to be true – it probably is. Look for the warning signs and don’t swim in it if the signs tell you not to. Taking a dip in it could get you likes, but it will more likely get you a rash, eye irritation, and digestive problems, too.