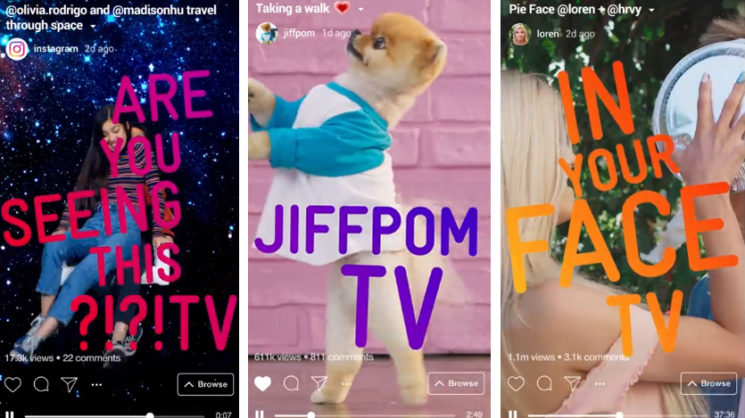 You may remember a recent report saying that Instagram will allow users to post hour-long vertical videos. Well, Instagram has just announced IGTV, a standalone app created solely for this purpose. It’s aimed particularly at users who watch videos on their phones, so all videos are in the vertical format and the company believes that “this is the future of video.”

In the announcement, Instagram writes that people nowadays are watching less TV and more digital video.

“By 2021, mobile video will account for 78% of total mobile data traffic. And we’ve learned that younger audiences are spending more time with amateur content creators and less time with professionals.”

IGTV is created for how you generally use your phone, which is why all the videos are in vertical format. As soon as you open a video, it starts playing instantly. According to Instagram CEO Kevin Systrom, the app will also allow creators to upload videos directly to Instagram. The Verge reports that videos can be up to ten minutes long to start, while “larger accounts” are able to post hour-long videos. I am not sure how “large” the accounts have to be for posting longer videos, though. Either way, in the long term, IGTV will likely allow all users to post videos of unlimited length, according to Systrom.

If you use Instagram, you know how packed it is with ads. Systrom says that there will be no ads on IGTV for now, but that would be “a reasonable place to end up.” So I guess there will be ads at some point, which is not surprising.

Instagram writes that IGTV can be useful for your business as it lets you “get closer to your audience and be discovered by new people.” But it looks like IGTV is aimed mainly at younger audiences who use their phones for just about everything. So as a creator, this could be useful for you if you want to reach younger people and present your work to them. But it’s also limiting, considering that you can only post vertical videos.

I don’t really get vertical videos; I don’t find that orientation “natural.” Maybe because I still watch video content on my laptop or TV screen. But if your opinion is different and you want to try it out, IGTV is now available for iOS and Android.

« Yongnuo’s new 50mm f/1.4 lens keeps up with Canon at less than 2/3rds the price
Photographer claims American Airlines lost her $13,000 worth of gear »