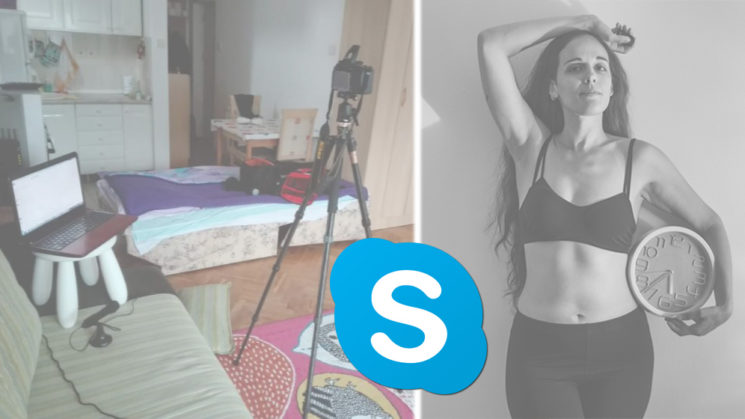 Recently, I wrote about Rock Your Ugly, a fantastic, empowering project by photographer Waleed Shah. He would interview people about their insecurities and ways of dealing with them, and then take their photos to follow the story. Reading all those stories from guys and gals who came out and spoke about their insecurities, I wanted to participate myself. But there was one obstacle: I am located in Serbia, and Waleed lives and works in Dubai, 4,000 kilometers away from me. However, we had an idea: why don’t we do it via Skype?

Posing via Skype is not exactly a standard thing to do, but in this situation, we had no other option. So, Waleed and I agreed on a date and time for the photoshoot. There were so many challenges and setbacks, but ultimately, we ended up with something great! It was both the coolest and the strangest photoshoot I’ve ever had. In this article, I’ll share what it was like from both perspectives: the model’s and the photographer’s.

The shooting day – DIY all the way!

Before the shoot, Waleed and I had a short interview. I talked about myself, my life and my insecurities, so he could get an idea of what we should make the focus of the image.

After the interview, I chose my outfit and it was time to shoot. Lucky for me, I live in an apartment with huge windows and lots of light. Waleed and I had previously agreed for 4 pm to be our shooting time, because that’s when direct sunlight begins to fall into the flat. After a whole week of sunshine, that Saturday was also sunny and really promising. Until 15 minutes before we were supposed to shoot, when suddenly the sky clouded over with the darkest clouds I’ve ever seen. I guess Murphy’s Law did its thing. Luckily, I own a speedlight. Even though I don’t like using it, there was no other choice. I don’t own a large modifier, so I had to improvise and shot it through a curtain to soften the light.

Since the idea was for Waleed to direct the shoot, I had to place the laptop so he could see both me and the camera display. It was challenging to say the least, but I managed: 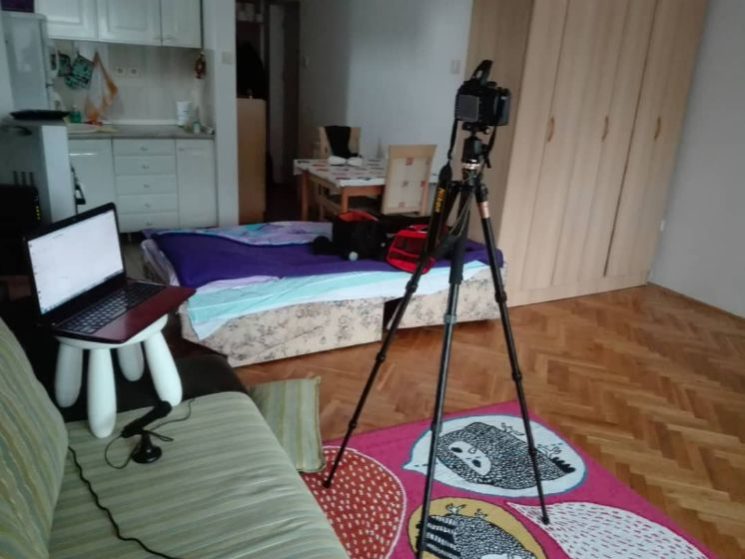 Still, Waleed couldn’t see the lighting and the fine details in photos, as the camera LCD appears way too bright on Skype. But oh well, at least he saw how the images were composed. He also could see me posing through my laptop camera, so he was able to direct me. I made sure to stand in the right place so I wasn’t out of the frame. And when it came to pressing the shutter, I did it with a wireless remote. Waleed decided that it should show in the photo because this was an unusual crossover between a portrait and a self-portrait.

First of all, I’ve never posed for anyone other than myself and a handful of people who all know me well. This was the first time I was directed by a professional photographer who is not my close friend or family member. I must admit it was a bit strange at first. I mean, I’m not a model and I’m not used to being in front of the camera. However, Waleed is both a kind person and good at his job, so I quickly became relaxed.

Other than the slight initial awkwardness and the improvisations I described earlier, I didn’t have any major challenges. Sure, there were the standard Skype connection issues, but fortunately, Skype started having hiccups when the shoot was almost done. Of course, I wanted to hear the other side too, so I asked Waleed what it was like to direct a model via Skype.

What it was like to direct a model via Skype?

I first asked Waleed what was it like for him to conduct an interview via Skype? I’ve done it a couple of times as a journalist, so it’s not new to me. But Waleed had never done it before our chat, so he says that he had no particular expectations. Still, he says that the whole experience was easier than he imagined. As for the shoot, it sure helped that I’m also a photographer, so I knew what I was doing when it came to taking photos.

“What was it like to direct a model via Skype? What were the biggest challenges and the biggest drawbacks? And what did you like about it?” That’s what I was particularly interested in. And this is what Waleed told me:

Directing was made easier because the model was listening to instructions and had experience with self-portraits. However, it was hard because my perspective was not the camera’s perspective so I had to imagine what that would look like in camera. It was even more challenging because I couldn’t see the image in the camera because the video isn’t great, so I had to trust the model/photographer on the other side to make decisions as to what looked good in camera and what didn’t. 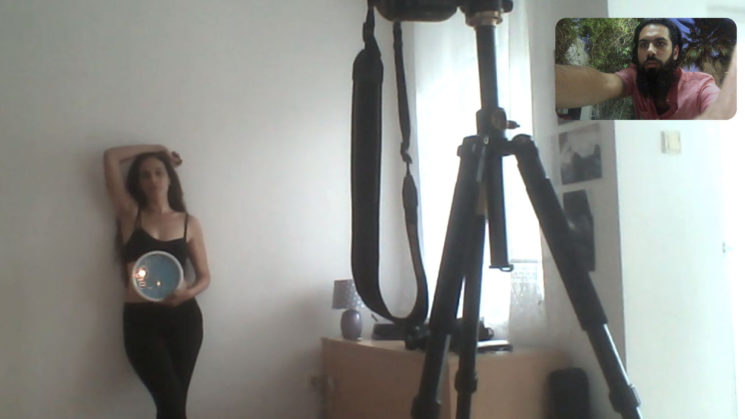 I’m pretty happy with the photo, but I wanted to hear Waleed’s thoughts on this too. So I asked: “Were the results as good as you expected? Or worse/better than you expected?”

I knew that I wouldn’t achieve the aesthetic I was looking for because of the lighting we used and that’s just a function of the gear we had. However, I knew I had control over the creative direction of the pose and expression to tell the story we were after. And that’s exactly what we achieved.

The interview and the photoshoot took about two hours, and as far as I’m concerned, time flew. Waleed relied on me to choose the photos I thought were the best, and so I did. I sent him the raw files, he edited the photos, and we polished the write-up of the interview together. Here’s the photo we both agreed was our favorite: 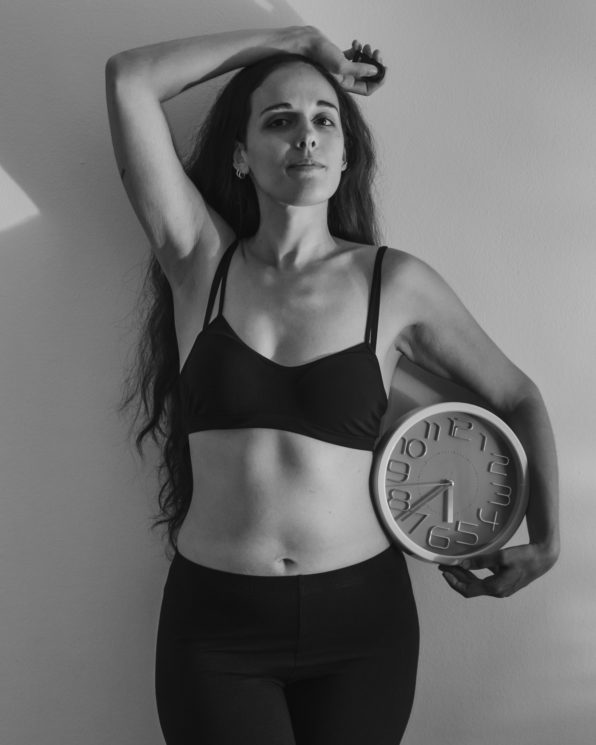 As I said, this Skype photoshoot was the coolest and the weirdest shoot I’ve ever experienced. First, it’s a Skype photoshoot – it’s unusual and totally non-standard. And second, it was also new for me to be in front of the camera instead of behind it.

Would I do it again as a model? Heck yeah, but only if I were to pose for a good cause and for the sake of helping others in any way, as I did this time. Otherwise, I prefer being behind the camera and directing a model who’s someone other than me. : )

If you’re interested in a broader context that led to the photo above, you can read my story as a part of Rock Your Ugly project, alongside many other stories that encouraged me to share it. If you’d like to participate, feel free to reach out to Waleed via his website or Instagram. I’m pretty sure that it doesn’t matter where in the world you live, as long as you have Skype and are willing to improvise a little. : )

The Coolest Photography Gadget Ever – The Bokeh Masters Kit + Giveaway