Over its 32-years-long career, the Hubble Space Telescope has captured all sorts of stunning events in our universe. One of them is a merger of two galaxies, and NASA recently shared a photo Hubble took of this incredible event.

Around 520 million light-years from Earth, in the constellation Orion, the two galaxies were brought together, forming a multi-armed galaxy merger. And in this stunning photo that NASA and ESA shared, you can see what it looks like.

The multi-armed galaxy merger is named CGCG 396-2 and it’s an observation from the Galaxy Zoo project. It’s a citizen science project; something like Jovian Vortex Hunter NASA launched for analyzing Juno’s photos of Jupiter. in the Galaxy Zoo project, hundreds of thousands of volunteers comb through photos of galaxies and classify them. This should help scientists “solve a problem of astronomical proportions,” ESA notes — “how to sort through the vast amounts of data generated by robotic telescopes.”

CGCG 396-2 was captured by Hubble’s Advanced Camera for Surveys. Some of the most astronomically intriguing objects from the Galaxy Zoo project were put on a public vote, and this photo was selected to be one of them. 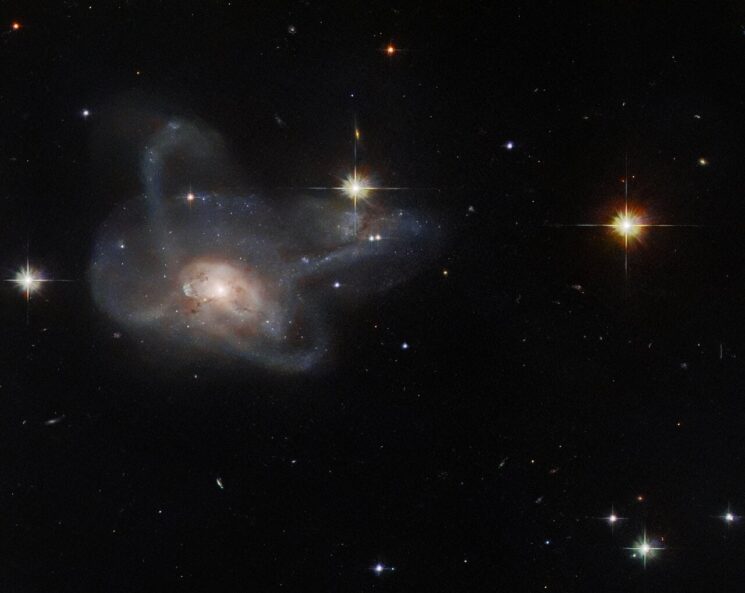 As for the Galaxy Zoo project, the idea was born when an astronomer was required to classifying more than 900 000 galaxies by eye. Can you imagine doing that on your own? As ESA explains, this is when a web interface was made and they invited citizen scientists to become a part of the project. “Within six months a legion of 100 000 volunteer citizen astronomers had contributed more than 40 million galaxy classifications,” ESA writes. What’s more, the project was so successful that it inspired more than 100 other citizen science projects on the Zooniverse portal.