NASA’s Hubble Space Telescope has just broken yet another record. After the most distant star ever seen, it’s now spotted and captured the largest icy comment astronomers have ever seen. And it truly is massive!

The estimated diameter is approximately 80 miles across. For reference, that’s larger than the state of Rhode Island, and around 26 times larger than the Comet Neowise. As for its nucleus, it’s about 50 times larger than found at the heart of most known comets. Its mass is also enormous: NASA estimates that it weighs 500 trillion tons, which a hundred thousand times greater than the mass of a typical comet found much closer to the Sun. 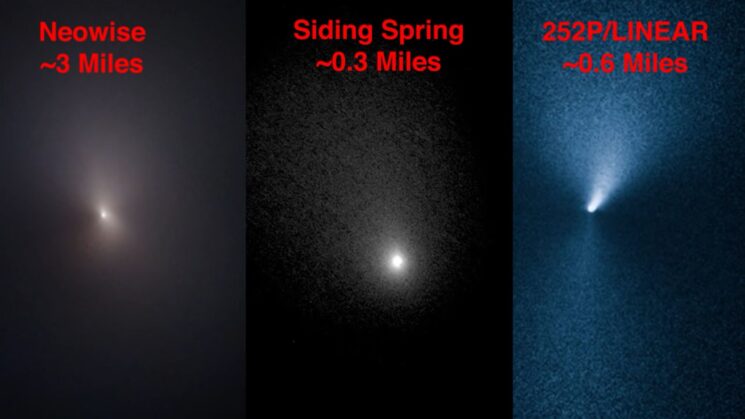 The comet was named C/2014 UN271, or Bernardinelli-Bernstein, by the astronomers who discovered it. “This comet is literally the tip of the iceberg for many thousands of comets that are too faint to see in the more distant parts of the solar system,” said David Jewitt, a professor of planetary science and astronomy at the University of California, Los Angeles (UCLA). “We’ve always suspected this comet had to be big because it is so bright at such a large distance. Now we confirm it is.”

As I mentioned, the comet is massive in its size and it has broken the record of C/2002 VQ94 discovered 20 years ago. For comparison, its nucleus was estimated to be 60 miles across. NASA explains that it posed a challenge for the astronomers to measure this comet because it was difficult to discriminate the solid nucleus from the huge dusty coma enveloping it.

“The comet is currently too far away for its nucleus to be visually resolved by Hubble,” NASA writes. “Instead, the Hubble data show a bright spike of light at the nucleus’ location.” Astronomers made a computer model of the surrounding coma and adjusted it to fit the Hubble images and the glow of the coma was subtracted to leave behind the starlike nucleus.

Here is how the newly discovered comet compares to a few other icy, solid nucleus comets:

Comet Bernardinelli-Bernstein is hurtling this way at the speed of 22,000 miles per hour from the edge of the solar system. But wait, no need to buy 100 rolls of toilet paper! NASA says that the comet will never get closer than 1 billion miles away from the Sun. That’s slightly farther than the distance of Saturn, and it won’t even happen in the next ten years.

Hubble snaps the most distant star ever seen