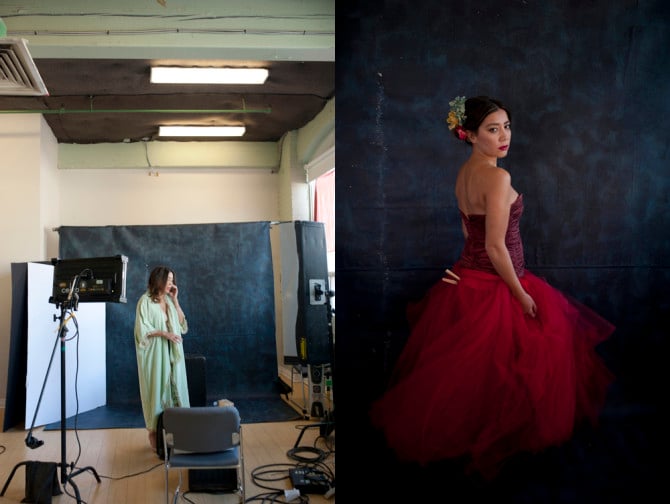 With winters lasting for 6 months in Toronto, I find that outdoor shoots are put on hold for pretty much the entire time. Because of that, I try improving my studio work during the indoor hermitting season as much as possible. That way once spring kicks in I can go back to shooting outdoors at full power.

I thought about renting but backdrops are easily damageable and I didn’t want to take on that responsibility. The ones for purchase offered at camera shops in my area are sold from $70 – 150 but they remind of those cliche high school photos. It’s just not my thing. In my dreamworld I’d love to own several high quality Oliphant backdrops but in my dreamworld I also have a much higher budget for this and generally much more money in my bank account. And so enters the do-it-yourself (DIY) attitude and some crossed fingers praying that I’m not crazy, wasting my time, or wasting my clients’ time.

I scoured the internet for any resources on how to go about doing this. I found Sue Bryce’s blog post which is very good but I wanted to continue researching. I found this post here but the photographer hired a professional muralist and damn it I just don’t care to buy all of the suggested items on his list! I’m very careful when it comes to purchases and try to to be as frugal as possible. I had a $250 budget for this so I ended up purchasing a lot from the latter. However, after painting a canvas myself I can guarantee that you can paint a beautiful, good quality canvas for less.

I wanted to create an Oliphant-inspired painterly and textured looking backdrop that had a lighter center with a dark vignette. I made a pinterest board with backdrops that give me a photo-boner, almost exclusively either Sue Bryce’s or Emily Soto’s. I am obsessed with this look for backdrops and definitely wanted to emulate them. Check out the pinboard I keep.

Everything that was necessary to make this happen was purchased at Home Depot. I wish I kept the receipt so I could share exactly what each item is called and how much it cost…I do remember spending almost exactly $250 for everything in total, if that helps. This is the list of things I purchased – in hindsight I definitely could have purchased less and for cheaper, so please keep reading on to know what was useful and what wasn’t!

So you’ve purchased everything, the plastic sheeting is taped to the floor and your raw canvas cloth is spread out. The canvas comes wrinkled but don’t worry – once it absorbs the paint it’s pretty much going to become a very flat wrinkle-free surface. So don’t bother with an iron or steamer.

Start priming (if you want)! I primed it 3 times with a roller, after each time I stopped and let it dry for approximately half an hour. I used a small fan to get the drying process to go faster, I found it to help. After the third coat the canvas felt pretty heavy and was very wet. I was done for the day. 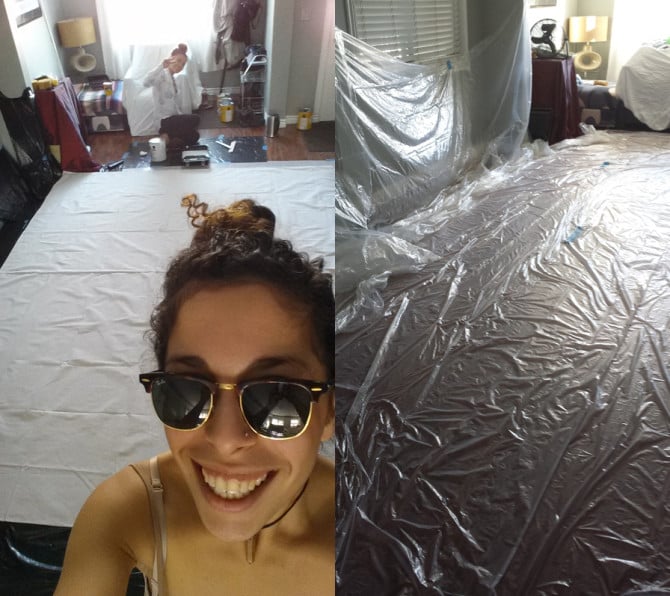 I started painting a week later and began with the darkest colour first: a deep black-blue. I painted three coats using the roller. That colour alone looked gorgeous, I would be happy having a backdrop with just that colour alone. However, if it’s layered with different colours, once lighting is brought into the picture the different colours could be brought out with different lighting setups. That’s what I was going for. 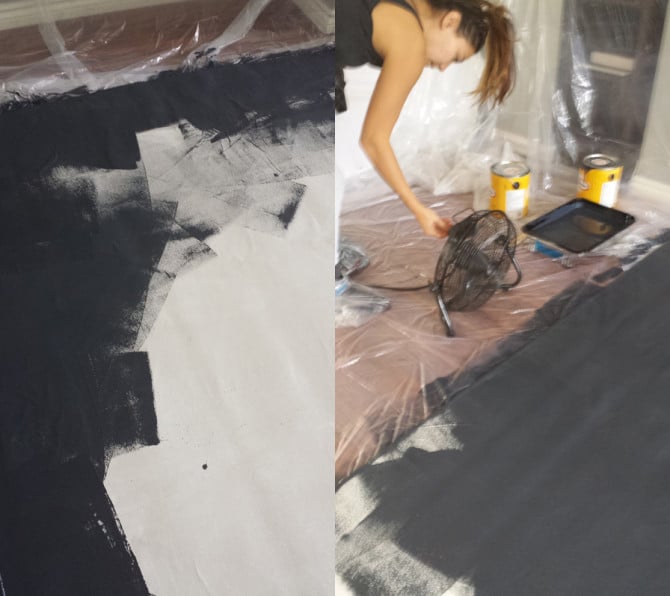 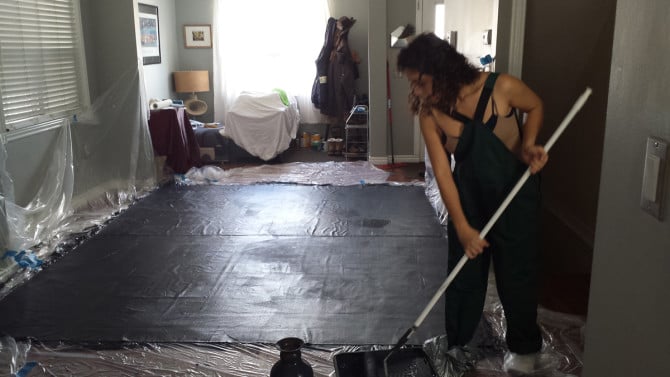 Again, I waited for the canvas to dry after each coat. The paint seemed to dry much faster than the primer so I was happy because I wanted to finish the backdrop that day. After 3 layers of the black-blue, I chose a grey-blue and painted the canvas with that colour. However, I left out the edges to start getting that vignette look that I wanted to achieve. After the grey blue, I chose another grey-blue and did the same thing.

Once that was done, I took the sponge and started doing all of the detailed texture work. I sponged the canvas using the black-blue, and then greys as well. I tried mixing some off-white but didn’t vibe it. So I took a little bit of white, and mixed that with one of the greys. I did around 4 layers of sponge-texturing. It’s all about experimentation. 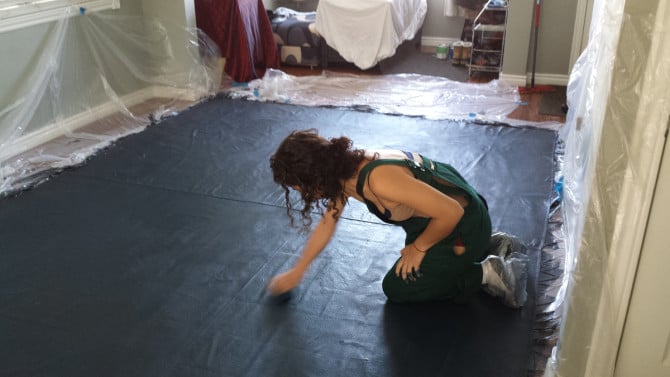 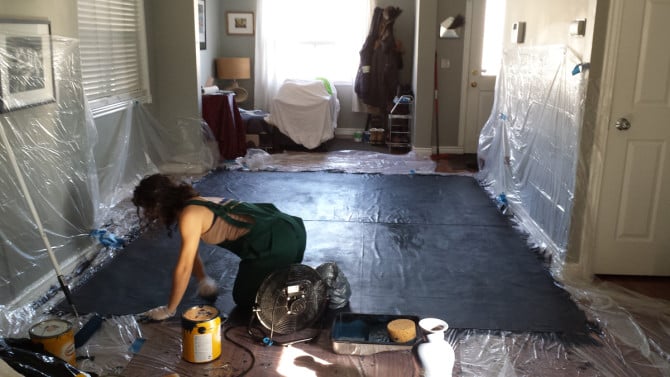 I’m very happy with the results, and more happy with the learning experience. I’ve used the backdrop four times already and can’t wait to use it a few more times, as well as paint a new one! 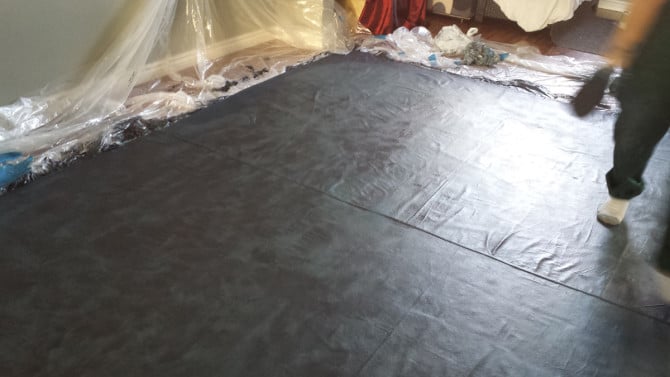 Here are some photos of the process and some creative images with the backdrop being used. Notice in the photos featuring the completed backdrop how the colours change depending on how the light reflects on it! Pretty cool and extremely versatile. 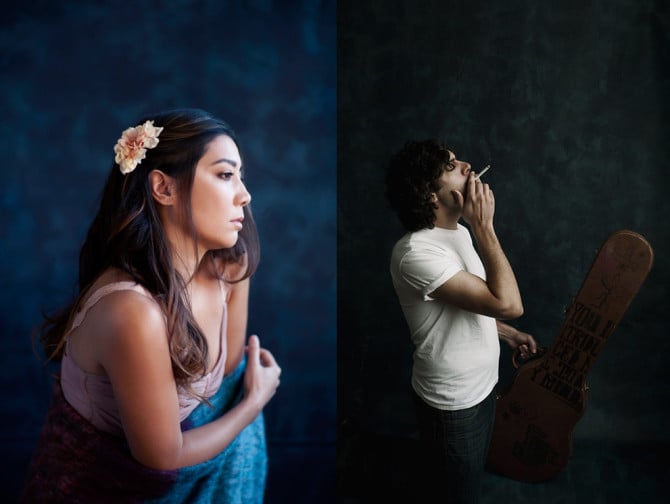 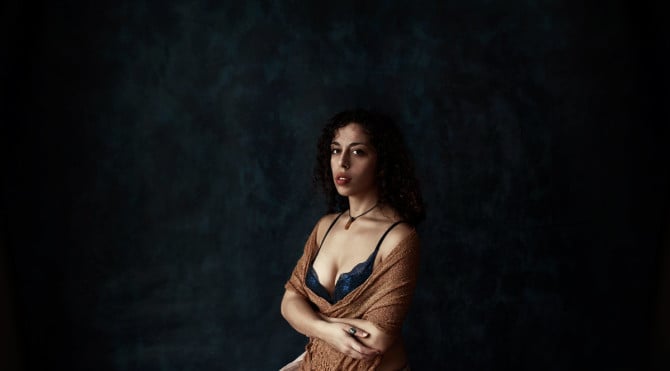 If you have any questions just ask. Hope you enjoyed this post, cheers :)

I’m a photographer from Toronto, Canada. I love being creative and seeking new adventures. I keep things interesting by doing what makes me so vibrantly happy – the process of creating, being in nature, new experiences, and keeping my imagination always running. You can see more of Liat’s work on her website, instagram, 500px, Twitter and Facebook. This article was originally posted here and shared with permission.

A cheap and simple way to paint your own DIY canvas backdrop
« 5 Wedding Photos You Can’t Take With A 24-70 (Also, Why the 24-70 is a Crap Lens Choice)
Still NYC is a Fun Experiment in Flowing Motion »