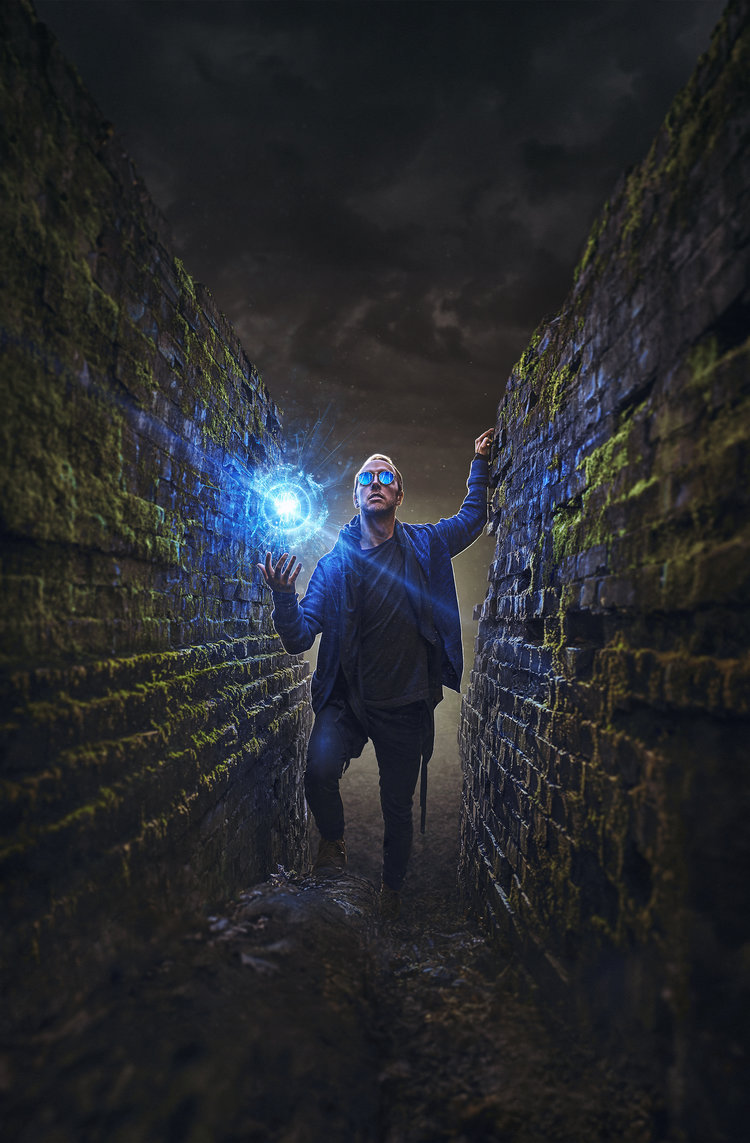 For those of you who don’t know who Joel Robison is, kindly crawl out from under your rock and check out his work. (Is there internet under your rock? HOW ARE YOU EVEN READING THIS!?!?) … Joel is an absolute POWERHOUSE of talent, creativity, imagination, encouragement and he is just an all around super nice guy. Joel and a couple of my other photographer friends Kristina and Anton were visiting for a weekend so obviously we did multiple photo shoots. Duh. 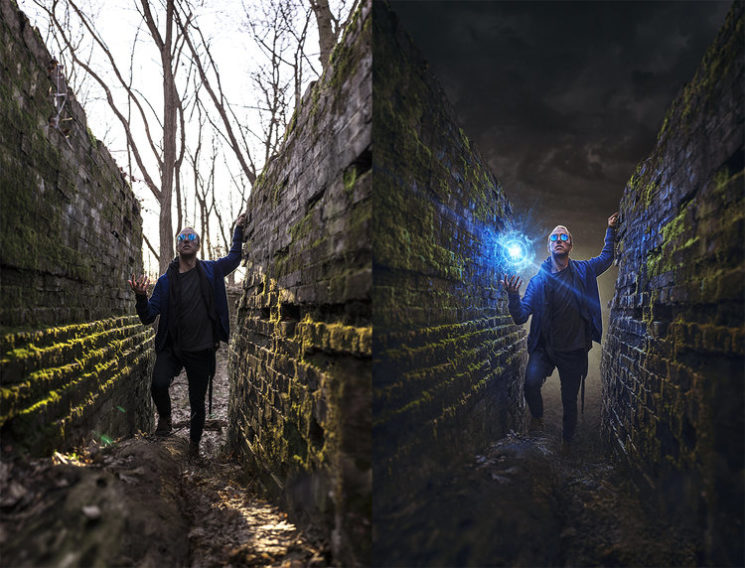 There is this great park near me with these weird brick … things in it. I think they might have been the foundation for a building that has long since been destroyed, but now there are just some interesting brick structures in the middle of the woods. They are neat. I’ve been wanting to shoot there for YEARS, and this finally seemed like the right time to make that happen.

I had recently picked up these nifty blue shades for 3 dollars (because I have a nose for clearance sales). I brought those and a blue sweater I have and decided to base my image around them. Normally while creating a wizard image one might not think to include sunglasses, but I was imagining him summoning some crazy bright blue magic light and he would need these spacial glasses to be able to see by the light without his eyeballs melting out of his face … or something. My brain is weird. So anyway, here is how I created said magical blue eye melting orb… 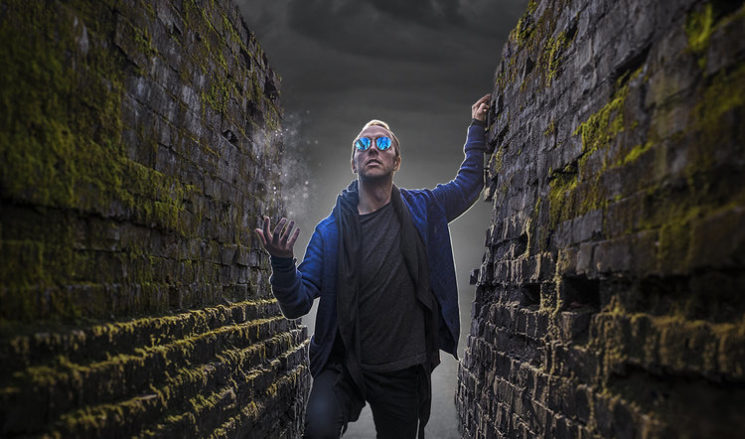 I wanted to have a lot of different textures and layers of magic built up to create the final effect, so naturally I added particles. I love particles … too much, maybe? No, that’s crazy talk. I placed in some particles from here on a “soft light” blending mode layer and a duplicated version of those particles set to “screen.” 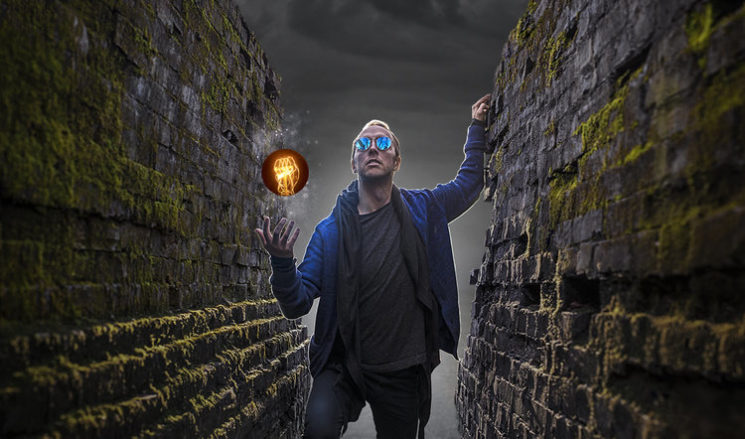 If you’ve been following Joel’s work you know he loves to use lightbulbs in his art. They are a theme that pops up quite often and I like how they can symbolize ideas, discovery, inspiration, and optimism. Joel even has one tattooed on his arm. I thought it would be cool to pull some inspiration from my subject and the magic around a light bulb. I got a badass bulb image from here, and then used the circular marquee tool (holding down shift to make it a perfect circle) and masked away the rest. Below are a couple of times Joel has included bulbs in his images … 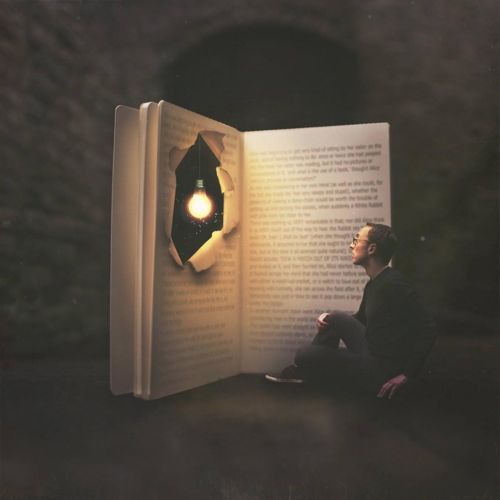 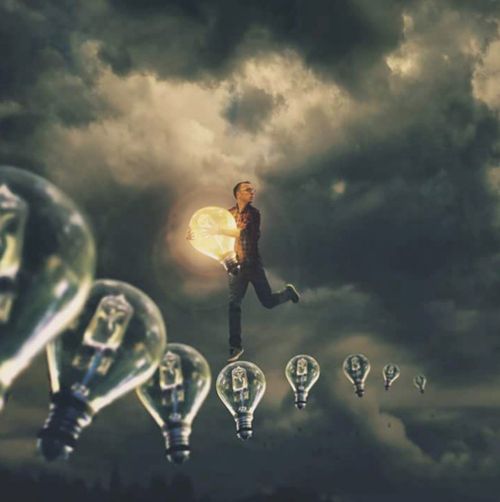 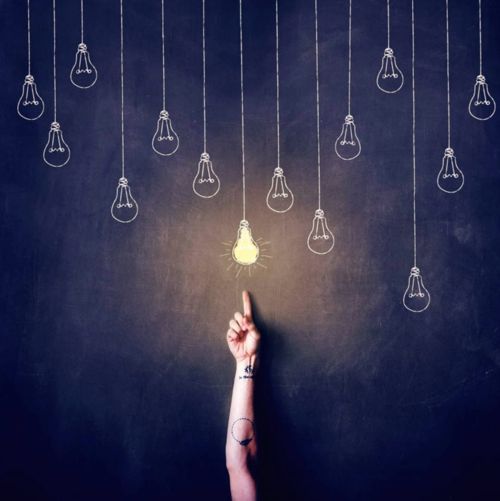 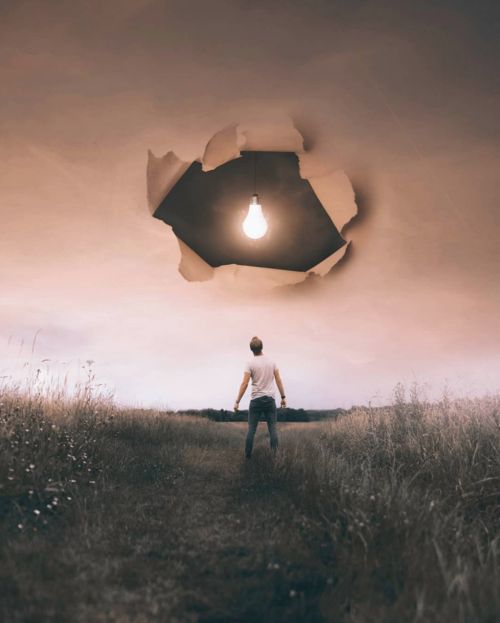 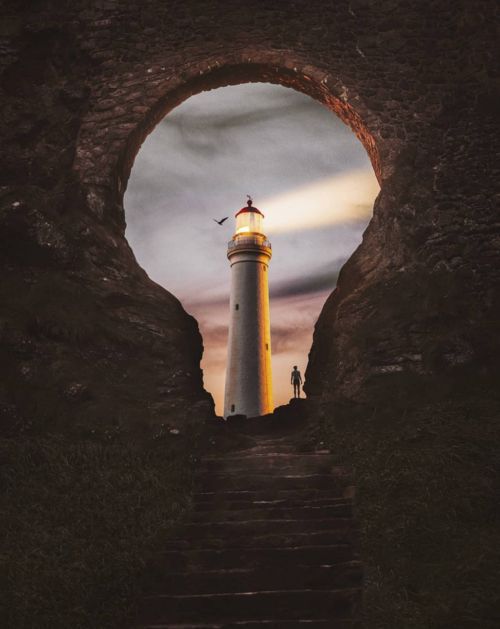 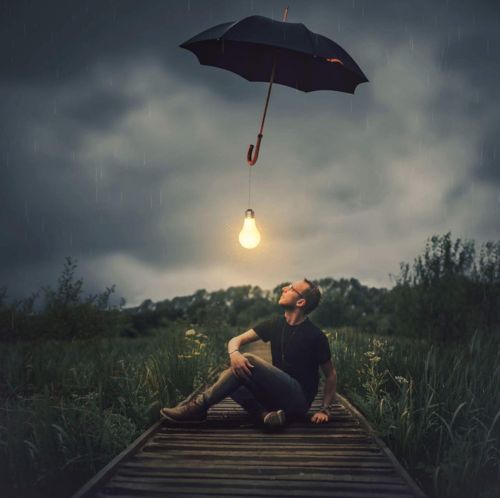 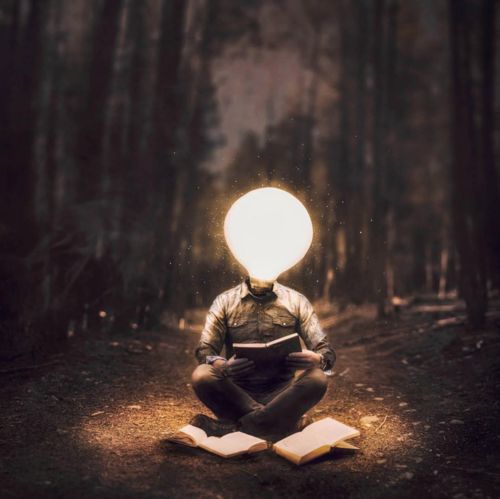 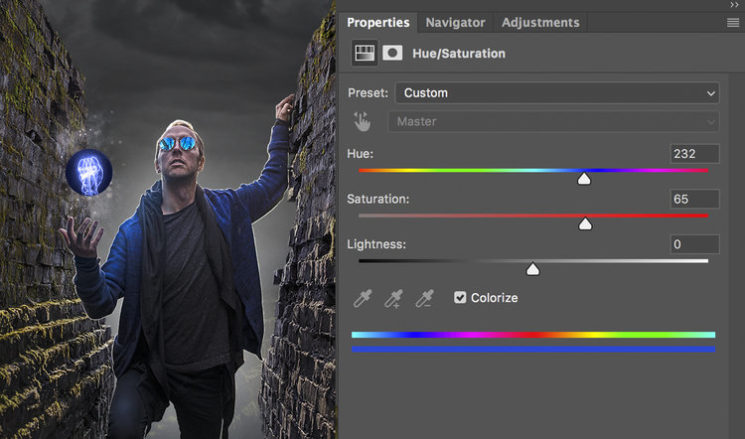 To get the bulb to be the color I wanted, I used a Hue/Saturation adjustment layer with the “Colorize” box checked. I then set the adjustment later to the “color” blending mode (it’s way at the bottom of the little blending modes drop-down at the top left corner of the layers panel) because when I altered the color it also messed with the brightness and contrast of the bulb coils in a way I didn’t like. By setting a layer to “color,” it will ONLY affect the color and nothing else. 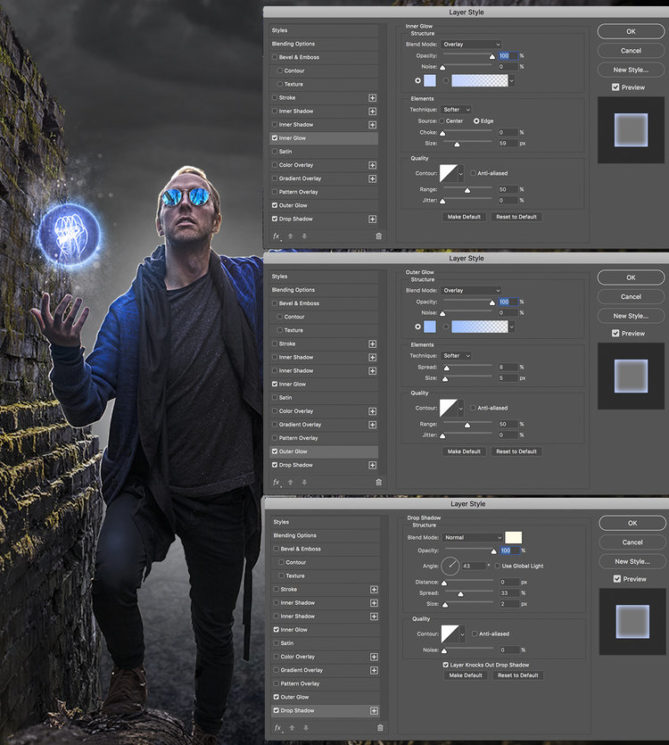 First I set the newly-blued-bulb-orb to the “screen” blending mode (which makes darker pixels transparent), and then I applied some layer styles. Most people never touch layer styles unless they are doing something fancy with type, but I use them ALL the time for lots of fun effects. First I applied a blue Inner glow to make the inside of the circle a bit brighter. Then I added an outer glow, which is basically the same thing but for the outside of the edge of the circle. Lastly I added a drop shadow, which I actually didn’t use as a shadow at all. If you set the “distance” to zero, the blending mode to something other than the default “Multiply,” and chose a lighter color, you can use drop shadow like an extra “outer glow” layer. I used this to add a thinner white glow right around the edge of the circle where I wanted the light to be brightest. 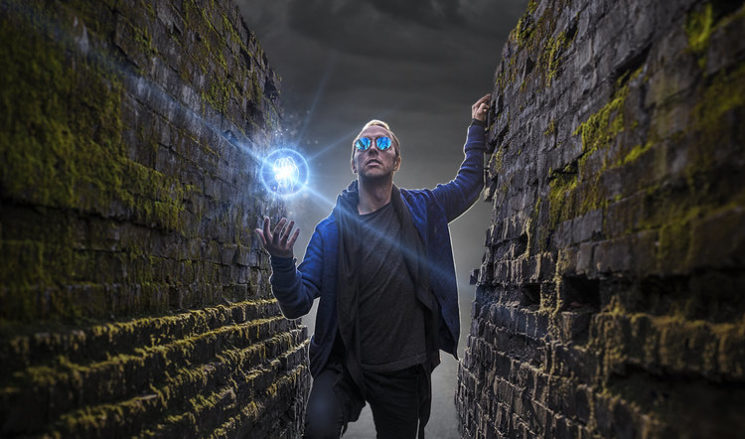 Next I applied a blue lens flare from here on top of the orb and set it to the “screen” blending mode. Not that it HAD to be a blue one to begin with – I could always change the color like I did for the lightbulb – but this one just happened to be blue. 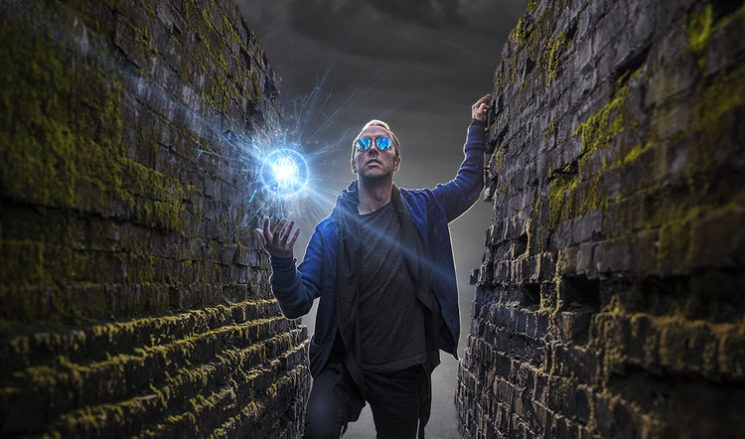 I really wanted to make this magical glowing orb look like it was sort of crackling, sparking, and sending off all kinds of different magical effects that might melt your retinas without magic sunglasses. I plopped in some sparks from this pack of sparkler images and, much like the light bulb, I made them blue with a hue/saturation layer with “colorize” checked and set to the color blending mode. 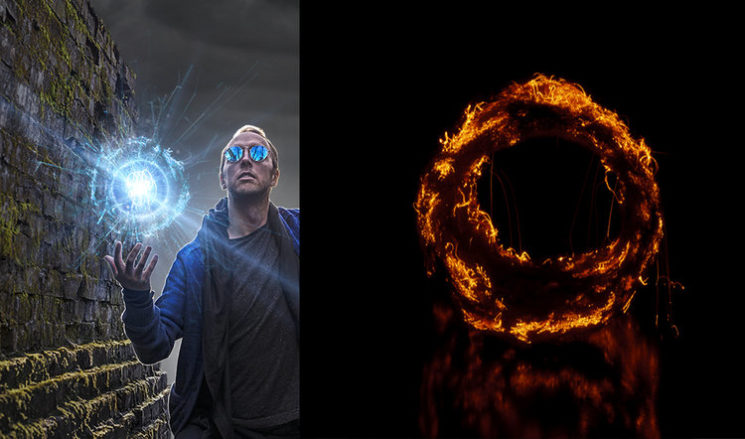 Again, wanting to layer up more and more different textures and effects, I added this super cool burning coil inferno texture from this awesome fiery pack, and continuing the theme of not letting color rule me back – I turned it blue to match. 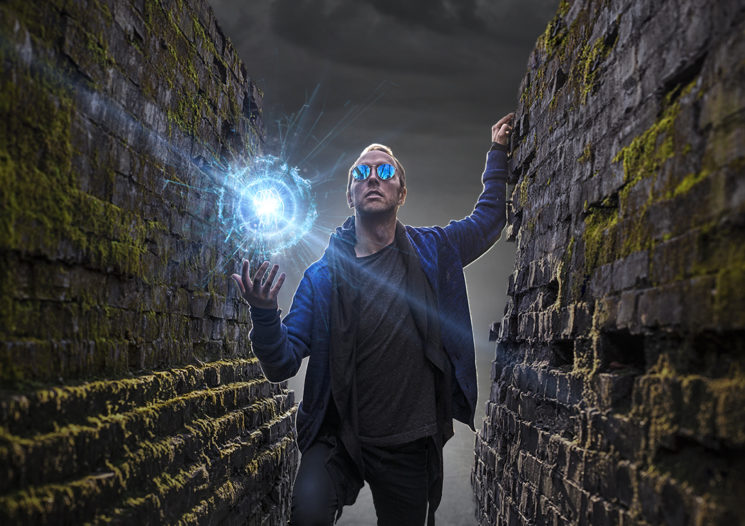 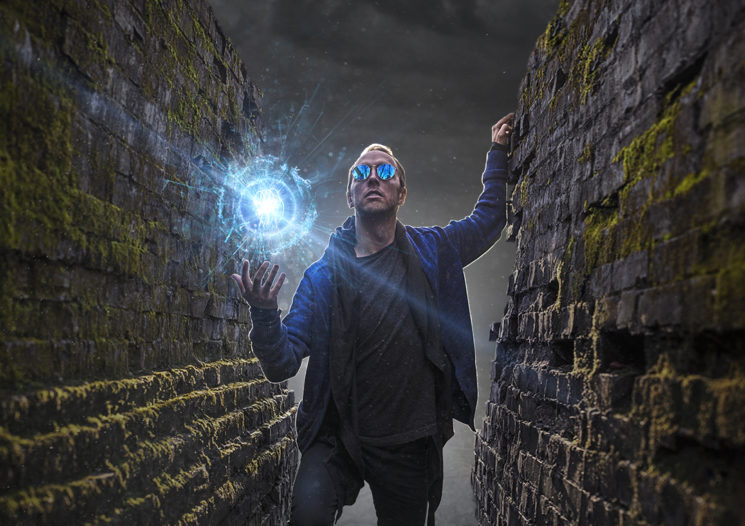 If you know anything about my work you know I add particles to just about everything. I’ve already added them to this image once in the first step as it is. The particles are from here, and I also painted in some of them right around the orb with this INCREDIBLE set of brushes. I’m seriously so obsessed with those brushes, you don’t even understand. Speaking of obsessed I just learned how to make these fancy slide-back-and-forth-before-and-after-things, so expect many of them in the future of my blog … and also in the rest of this post. 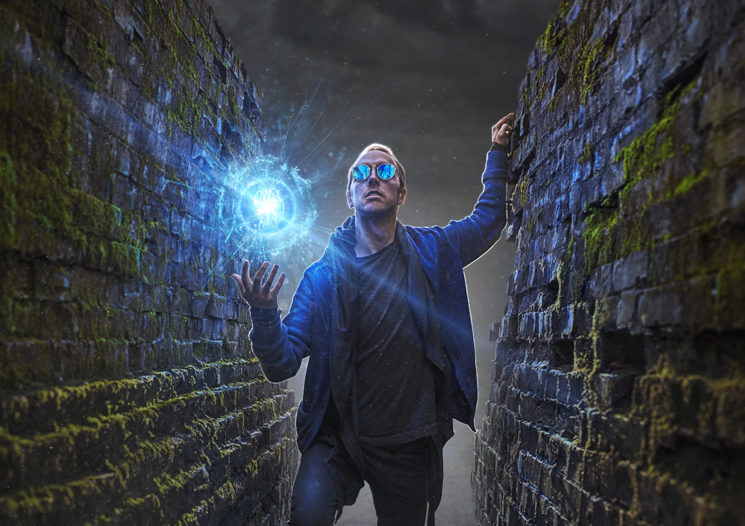 If anyone ever asks me what my favorite part of editing is, my answer is ALWAYS, “The point when all my pieces are in place and I get to start painting details and affecting my lighting!” This is done with a series of layers – For the most part I have one “normal” blending mode layer for darkening down things (and possibly for little white glows and reflections off things), one layer set to “soft light” for more general overall shadowing and highlighting, and then an “overlay” layer on which I paint the smaller, more fine-tuned details. But let’s be real, it’s never just three layers. There are usually quite a hefty handful of “overlay” layers building up the desired look. I rather enjoyed painting in a ton of little blue light reflections on the brick, focusing on smaller areas on the corners and edges that light might be glaring off of, almost attempting to make it appear that they were a little wet and shiny.

I didn’t really push the colors TOO far in any direction since right off the bat I knew pretty much how I wanted the finished image to look. I did end up making the greens/yellows considerably more bright/punchy/saturated, and I love the final look of the greens with the blues. I layered up a couple “selective color” adjustment layers, as well as a “color lookup,” and a “channel mixer” adjustment layer to pop the blues a bit more and also warm up the background just a tad to give him and the orb more separation. Speaking of channels, I also made use of the blue channel while coloring so I could make a selection of just the blues in the image. If you go to the channel tab (usually under your layers tab) and command-click on one of the channels, it will load the luminosity of that channel, kind of like a selection of all the pixels of that color. I then used my blue channel selection to add a layer mask to some adjustment layers in order to apply color moves to just those pixels. 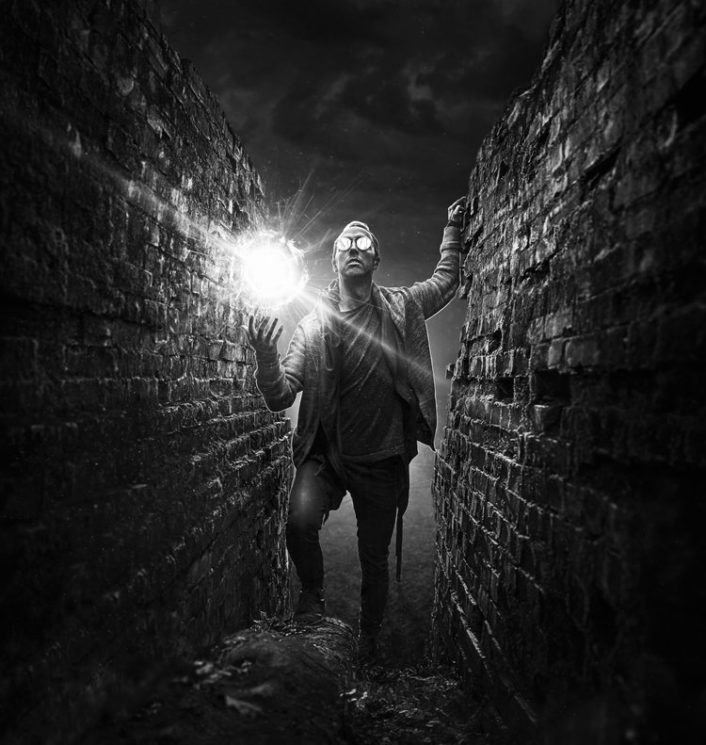 SO, there you have it. That’s how I granted Joel the magical powers to summon a glowing blue orb of light. It was such a fun shoot and such a fun edit. I just love when I get an idea in my head and from start to finish everything turns out as I envisioned. It definitely doesn’t always go that way, but when it does it’s a real treat. 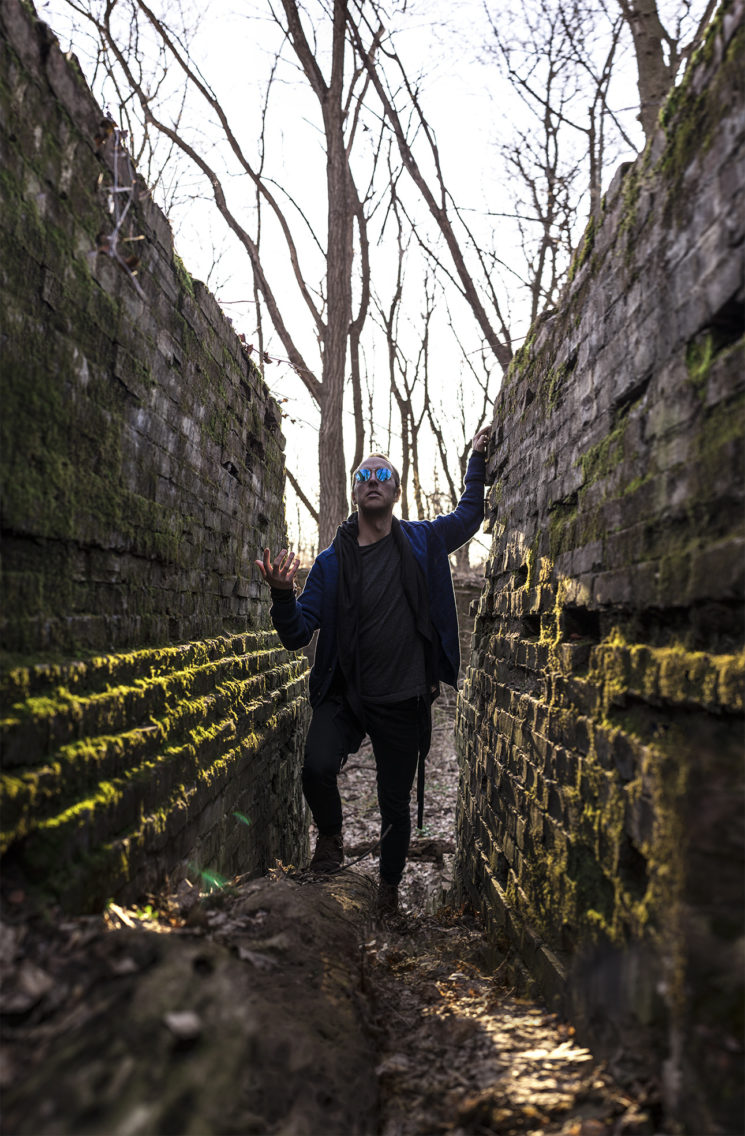 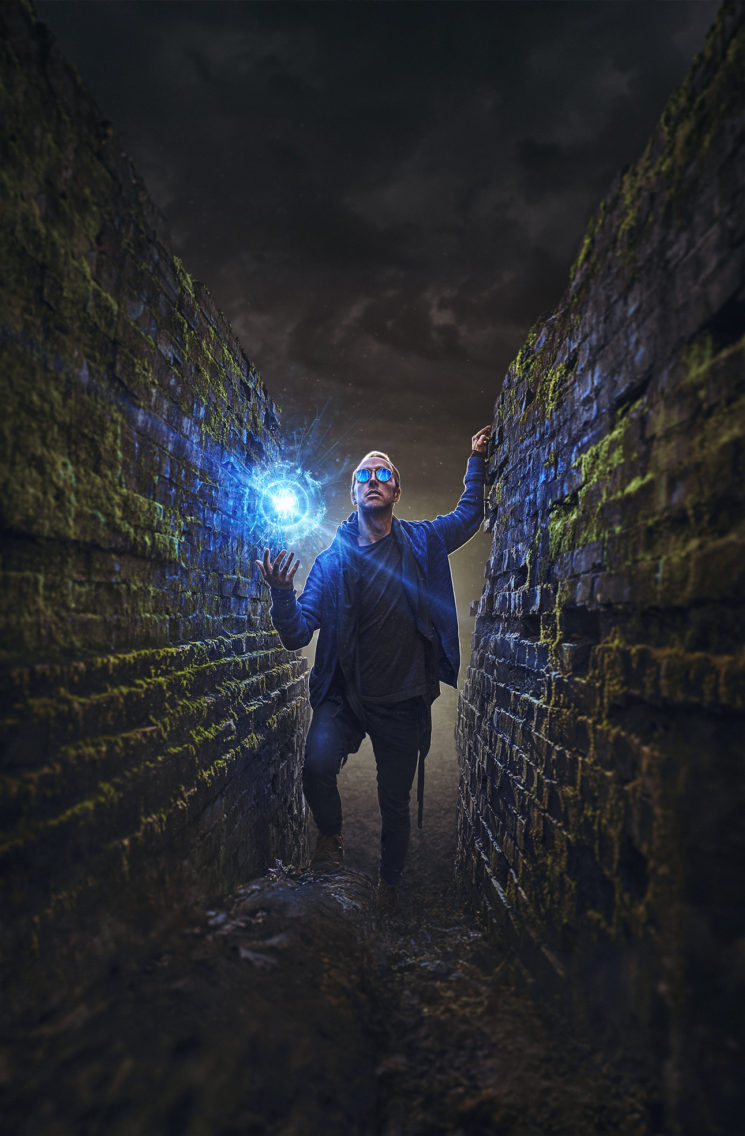