I enjoyed shooting a Porsche GTS a few weeks ago. Shooting cars is a new challenge since I am not too experienced in that genre. While the Porsche shoot produced some presentable results I was not completely satisfied. What I had in mind was a cool shot with the car in the dark, only the silhouette lit by a strip of light and some minor details of the car showing. Those are cool shots.

But there is a logistical barrier. To achieve that effect you need a softbox suspended above the car which is at least double the size of the car. Obviously that was not an option since for such setups you need quite a budget and a crew.

I pondered that issue a while. The solution is so simple that I facepalmed myself for not getting that idea earlier. I need a softbox which is larger than the car to light the complete silhouette. I have two 80×120 cm softboxes, so all I need is a small car.

The next day I went to a toy shop and scrutinized the model cars. At first I looked at the model cars which are meant for display (scale 1:18 or smaller mostly). They were quite nice but I chose a radio controlled Ferrari FF scale 1:14. Besides being the model with the most details the 1:14 scale also was the biggest model I could find. And in addition to model cars which are meant for display only, I now have a cool radio controlled Ferrari to drive around :)

The shooting setup is both very easy and difficult at the same time. Place the model car before a black background and hang the light source directly above the car. I angled my studio flash with the 80×120 cm softbox looking downward to achieve the desired lighting effect; Choose the flash power to achieve the lighting intensity of your personal taste and voilà.

That easy? Well, not completely. If you want only the silhouette of the car being lit you have to adjust the position of the car, the angle of the softbox and your shooting position until you find the desired constellation. Only too often the softbox reflects off the car windows and you have white windows. Moving the car a little bit back and forth controls the reflections and after a while you’ll get the results you are looking for. It requires a little patience and handiwork. 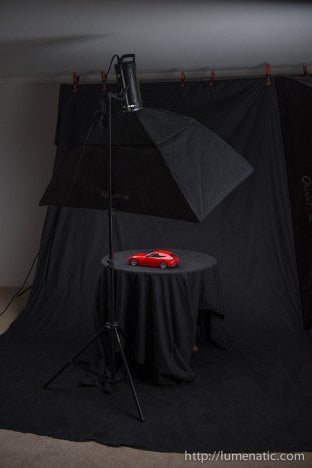 By the way, that was the first time I really appreciated that the studio flashes have a strong modeling light. With the modeling light you can position the car to your liking, move around with the camera and immediately see what effect the changes have to the lighting situation.

After I had the silhouette shots I wanted to photograph the complete car. Now I needed the second studio flash, which illuminated the side of the car. In between I also experimented with a snooted Speedlight but found it difficult to cover the complete side of the car with light. The second large soft box also illuminates the background and one could see the texture of the black fabric, but taking care of that is what Photoshop if for, isn’t it ? 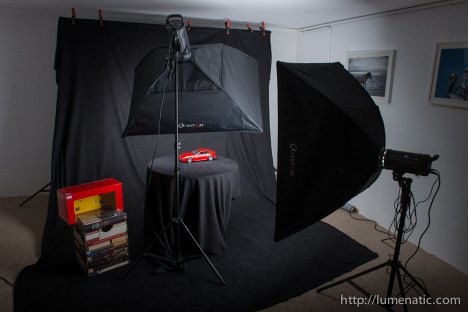 Enough talk, here are four tips to achieve a realistic look when shooting something small that is supposed to look big:

1.) Depth of field ! Our brain recognize images with a shallow depth of field as close-ups. The best example are tilt-shift-images, where the depth of field has been reduced artificially. A few posts ago (the one with the historic steam engine) I simulated such a shot, see here. It’s a normal sized train station, but your brain tells you it’s model.

Here we are looking for the opposite effect! When you shoot a model car, choose a small aperture and shoot with a larger focal length from a little distance to achieve a high depth of field.

2.) Eliminate any references. Again brain stuff. Once our brain has a reference to hook on, the illusion is gone. If a speck of dust or a small hair lands on the model, your brain immediately springs into action. “See hair. Hair small. Therefore car small”. So either use the rocket blower during the shoot or remove the dust and hairs in post. The “reference” point also applies to shoots outdoors. Place the model car on a type of ground that supports the illusion. Something like fine-grained rubble or asphalt should work.

3.) Shoot at eye-level. Most car shots are made at eye-level because the photographer stands on the same ground as the car. Shooting the model car at the same height supports the illusion. But that is more a recommendation than a rule.

4.) Last but not least, preferably use a big and detailed model car. The bigger the model car and the more detail it has, the easier it will be to achieve a realistic look. If you can, buy the model in a store and not online. In the store you can see the car with your own eyes. If you buy online the images you see on the vendor’s webpage might be misleading because there is a thing called Photoshop. I am not saying that buying online is bad (I buy 95% of my stuff online), but in this special case it might be better to take an unfiltered look at the product.

3 Ways To Shoot A Ferrari On A Budget

How a Sigma Art lens messed up my Ferrari photo shoot

BTS: Photographing a Ferrari With A “Portable” Car Rig