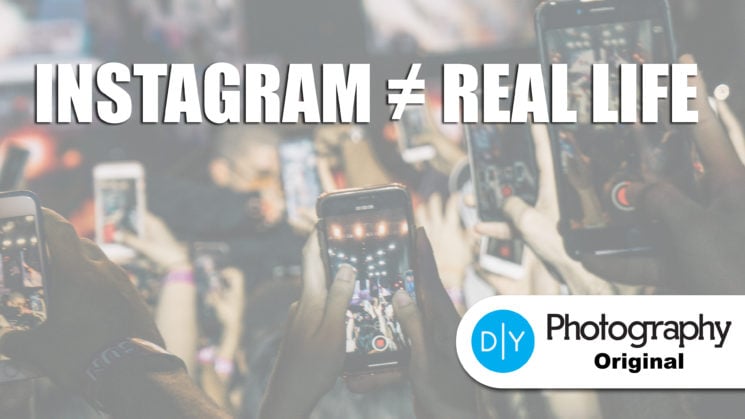 Instagram isn’t real life. I’ve been repeating this in my articles, to my friends, and myself pretty often. And yet, I recently realized that I’ve also fallen into this “perfect life” trap. I noticed that I’d shared some photos that look far from how I felt at the moment. And it got me thinking – how easy it is to become a part of the problem?

In this article, I want to address two sides of the same coin. One is about posting stuff that makes you appear happier and more fulfilled than you really are. And the other is feeling envious of people who seem to have their sh*t together…  At least on Instagram. But more importantly, I also want to share how you can overcome both and stop taking Instagram too seriously.

Before I go on, I’d like to note that I use Instagram as a sort of a visual diary, and my profile is private. Most of the time, I only post photos that make sense to me, remind me of something, or mark anniversaries of certain events. Still, people who follow me might occasionally perceive them totally differently, and you’re about to understand why.

The photo that got me thinking about all this is this one: 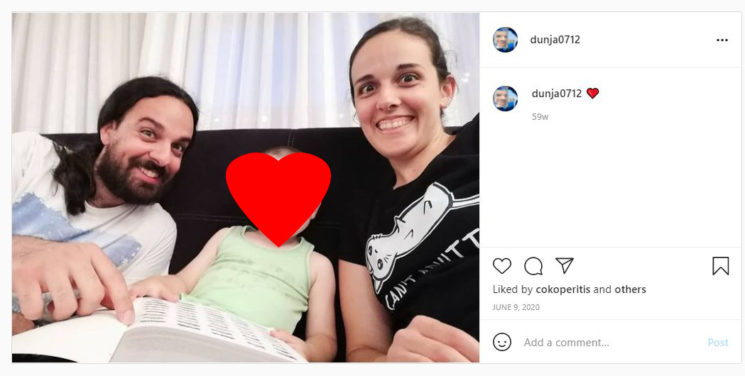 That’s my brother and our little nephew in the photo. Wanna know when we took it? Around 8 pm on the day our mother had surgery. Due to the pandemic, we weren’t able to see her. We were only allowed to call her doctor around 1 pm to see how the surgery had gone, and that was it. They told us that the first 24 hours were critical, so we waited. We had no idea if she was well and if the tumor was benign or not… Nothing.

Our wonderful extended family invited us over for pancakes. They didn’t want us to be alone. On our way there, we saw a scene that I’d rather not share since I’ve overshared already. I can only tell you that it made the day much worse for both of us, so imagine what a massive pile of crap that day was.

And look at us, smiling for Instagram followers. Those who know us were aware of what was going on, but most people I know still have no idea about this episode in our lives. I know that this isn’t how we smile and look when we’re happy… But again, not many people do.

In case you’ve been wondering, mom’s well now. When I look at this photo, I am reminded of one of the worst periods of my life – but also of what made it bearable. I also remembered a few more images like this that may appear completely different to observers. I’ll leave you the screenshots below and some background info so you can get the idea. 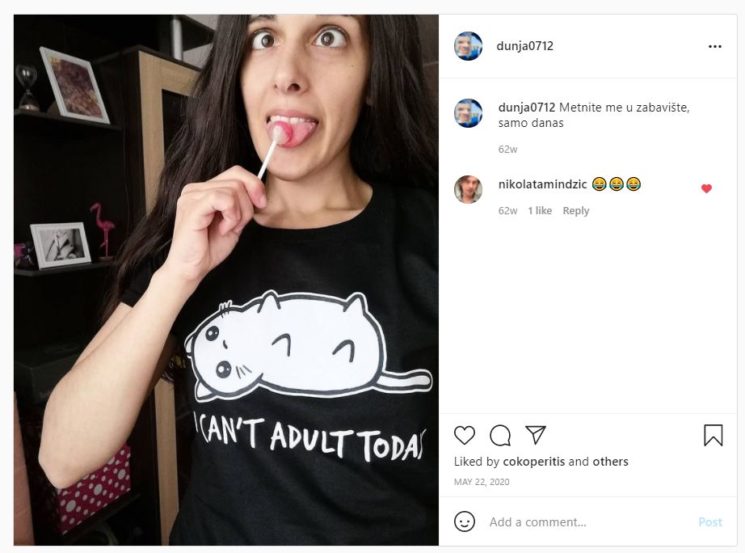 Caption: “Put me in the kindergarten, just for today.” Taken on the day I felt all the fear and burden of being responsible for my only living parent and I really had to act like an adult when I left the apartment. 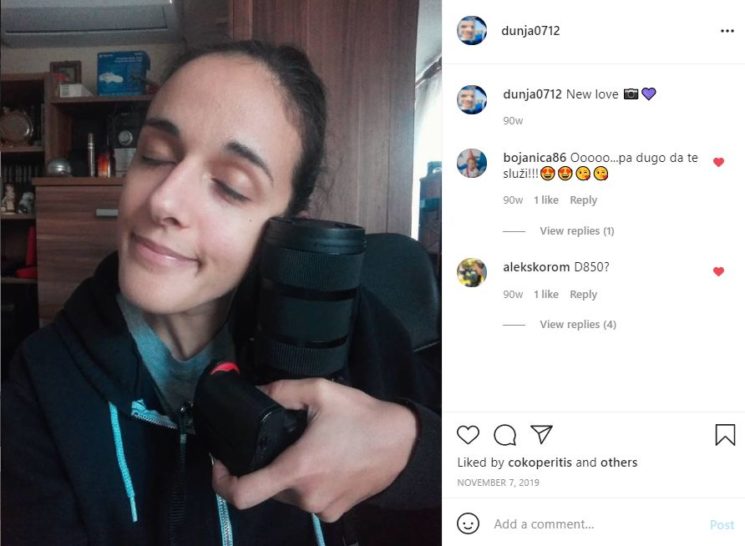 Caption: “New love.” I didn’t mention that I bought my “new love,” Sigma 18-35 f/1.8 the same day I met my old love after two years or so. He gave me some of my stuff back, we chatted for a bit, and it was the worst, most unpleasant encounter ever. I felt drained and super pissed off after it… But hey, I want to remember this day after something good. 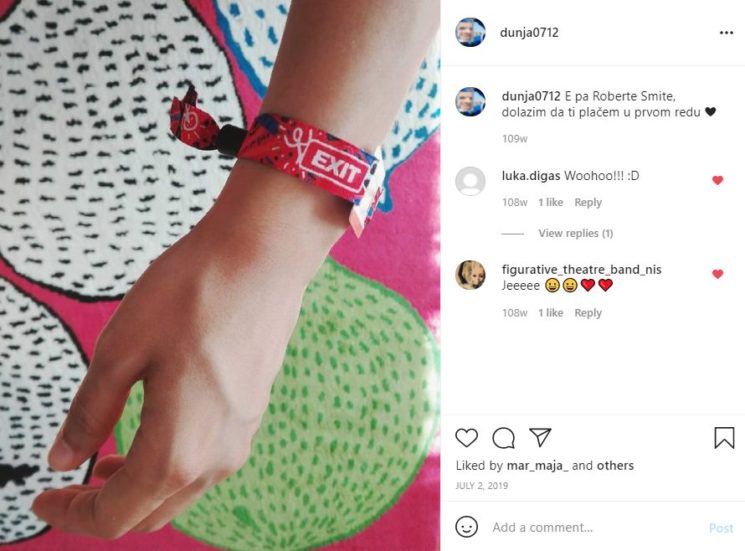 Caption: “Okay, Robert Smith, I’m coming to cry in the first row!” I forgot to mention that I was feeling at my worst, I couldn’t enjoy the concert at all, and I sold the ticket for the remaining days of the festival because I couldn’t stand being in a large crowd.

Like I said, my private account is a sort of a diary for me. It’s quicker than writing an actual diary, which I still occasionally do as well. Anyways, there are three reasons for posting photos that appear way happier than I am in them:

How not to be deceptive?

Well… Don’t. :) I must admit that I haven’t thought much about this since most of my posts aren’t deceptive. They’re just random snaps from the street, cat photos, occasional selfies… But now that I think about it, there are some ways to balance things out, and I do all of them. 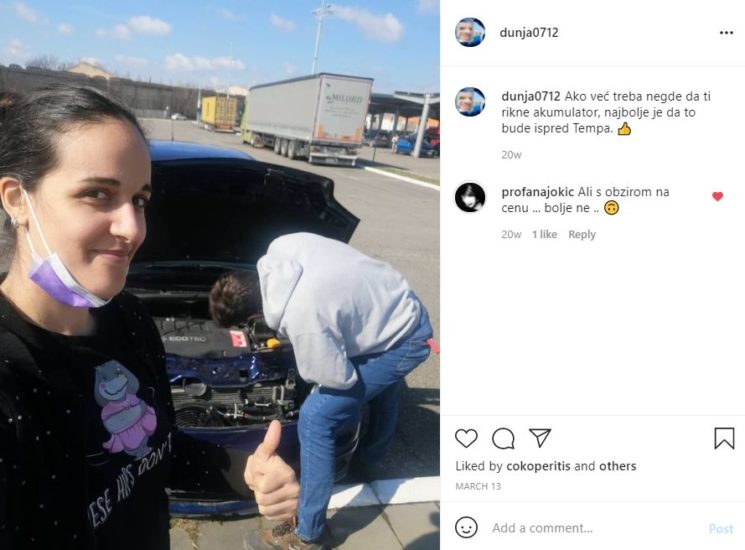 My car battery died completely and I had to spend an extra $100 to buy a brand new one… But hey, I’d bought a freakin’ car right before that!

I’m a relatively intelligent and highly introspective human being, so I’m aware of the world around me and within me. Still, I sometimes catch myself envying other people on Instagram. Ironically, I’m the one constantly bugging you about how social media doesn’t reflect real life.

I’m not envious of the people who have hotter bodies, longer hair, or more money than me; at least I’m not that superficial. But I do feel a sting of jealousy when I see other people partying at a festival I wasn’t able to attend. Or when I see people sharing photos from the seaside (that would be everyone right now). At the same time, I’m in my room, working and doing my side projects most of the time. Sometimes it seems that everyone is having fun and everyone is resting but me!

How to deal with it?

I have two ways of dealing with this sudden strike of envy. First of all, I need to become aware of it and acknowledge that something is making me feel bad. And then, one of these techniques will help:

One of the ways to overcome it is to ask myself – What’s stopping you? That’s something a therapist occasionally asks me and it has really helped to shift my focus. What’s stopping me from attending a festival or going to the seaside? If it’s an objective reason (lack of money, lots of work to be done, etc.), I have to accept it since I currently can’t do anything about it. And if it has to deal with my own laziness, the lack of will, anxiety over crowds… Well, I can either work on it or, again, accept the situation until I’m ready to change it. This leads me to the second method.

It’s not how it looks

Sometimes I remember my own posts I mentioned above. The photo in which my brother and I are smiling while not knowing if our mom would make it through the night. Or the one from the festival I was attending during a major depressive episode. And then I remind myself – not everything is how it looks. If I’m in a bad place, I wouldn’t be happy at the seaside or the festival. During those times, it’s better for me to have enough sleep, eat well, rest, and go to therapy to try and solve the problems that bother me. Only then can I actually enjoy what I’m feeling so envious about.

To conclude – it’s easier than you think to fall into Instagram’s “perfect life” trap. No matter how aware you are that those posts don’t reflect real life, you can sometimes find yourself on both sides: envying others, or posting stuff that will make others envy you. But don’t beat yourself up about it. It will happen, but what matters is that stay aware of it and not do it all the time.

I’m not here to tell you how to use your Instagram and what photos and captions to post, it’s totally up to you. But at least stay “awake” while scrolling through it and stay aware of the fact that social media affect our perception of reality. If you feel envy, acknowledge it, see where it comes from and what you can do about it. And remind yourself that, after all, each Instagram photo is just a fraction of a second in a 24-hour day.

Now it’s your turn. Let me know, do you feel like you’ve fallen into this trap?