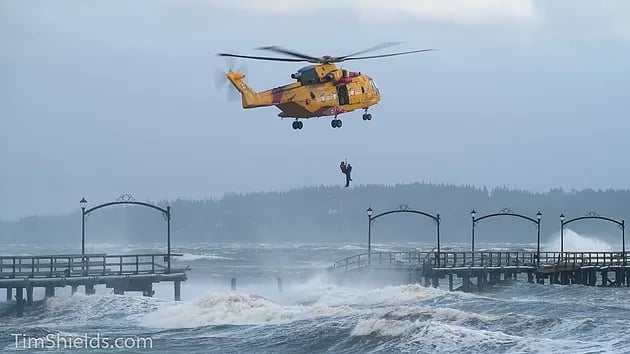 On December 20th, 2018, a winter storm in the City of White Rock, British Columbia, Canada made for some dramatic photos and resulted in the helicopter rescue of one man.

The event started out as a photo walk with my adult daughter.  Waves were crashing against the shoreline as we walked along the promenade which is a pathway usually busy with walkers.  The wind was blowing in strong gusts and picking up water with it. 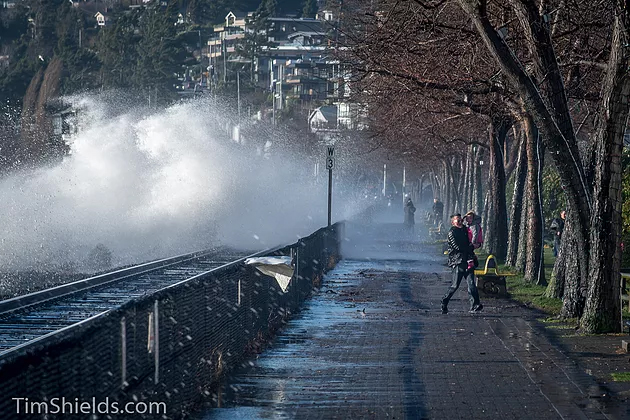 A man holding a child runs to avoid the blowing surf from a crashing wave. 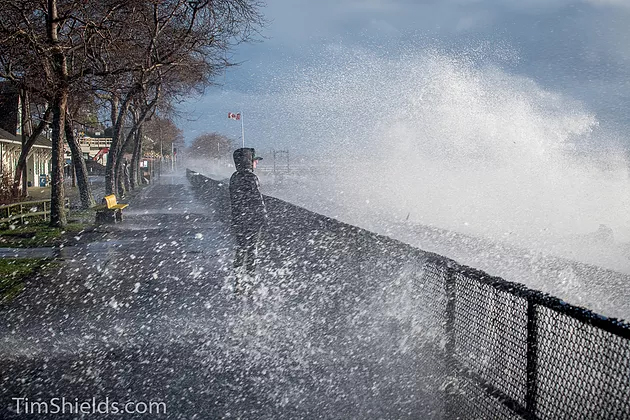 Many people walked to the ocean shore to witness the weather event. 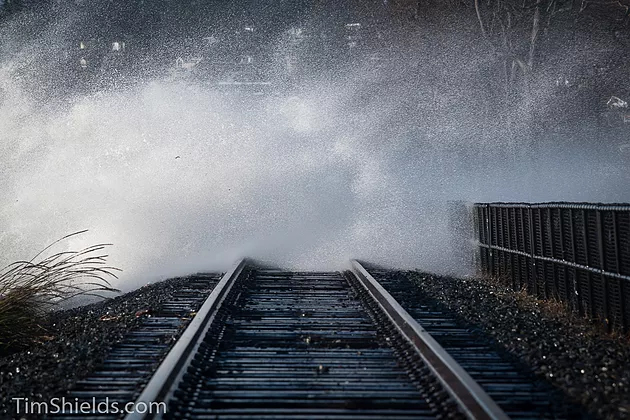 The train tracks in White Rock covered with blowing surf from crashing waves. 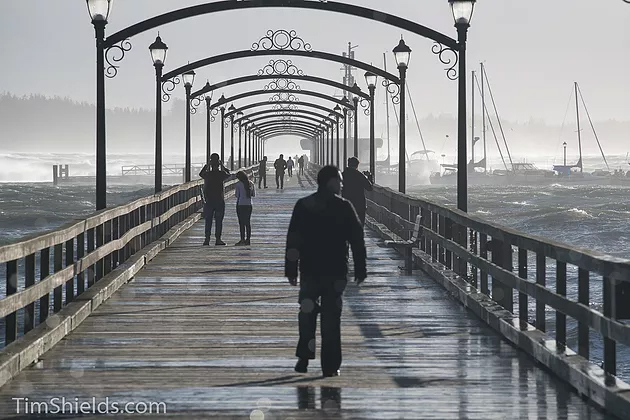 We walked out onto the pier.  There was no sense of danger at the time.  The pier was busy with other people walking out to the end where there is a large rock breakwater that protects about 25 boats that are always moored there.  The pier felt secure and there was no indication of what was to come.  This pier has been the icon of White Rock for the past 100 years and it has withstood many storms stronger than this one. 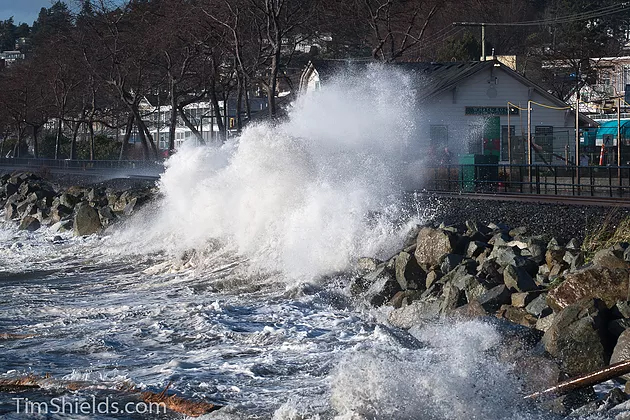 The view from the pier allowed us to see The White Rock museum as it was covered in blowing water from crashing waves. 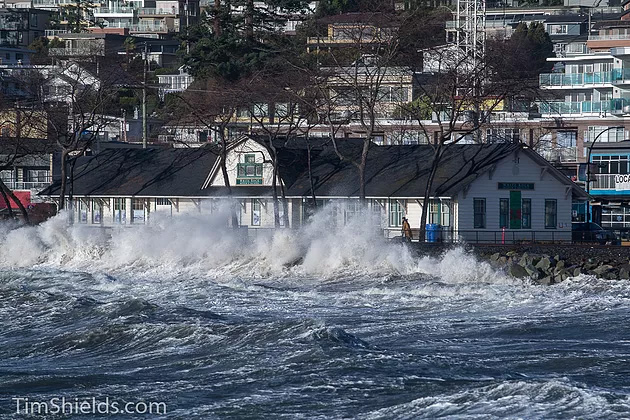 A long crashing wave in front of the White Rock museum.  The building wasn’t flooded, but it looked like it from this vantage point. 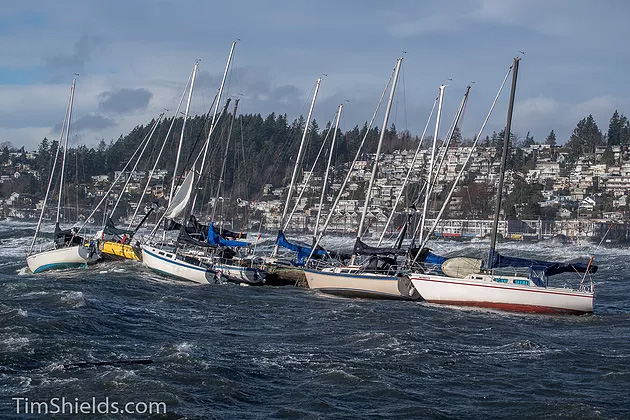 A dock with about 12 sailboats tied to it broke loose from its mooring at the end of the pier.  The dock and sailboats were being blown in the direction of land.  If you look closely, you can even see two light standards on the dock. 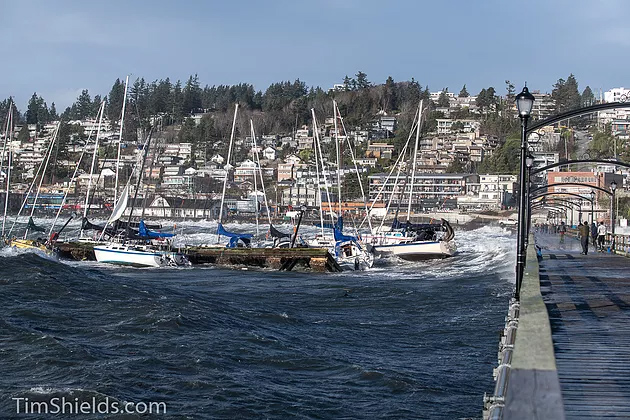 The moving dock and boats changed direction and headed towards the pier.  This change in direction happened quickly.  At this point, the pier was still stable and solid. 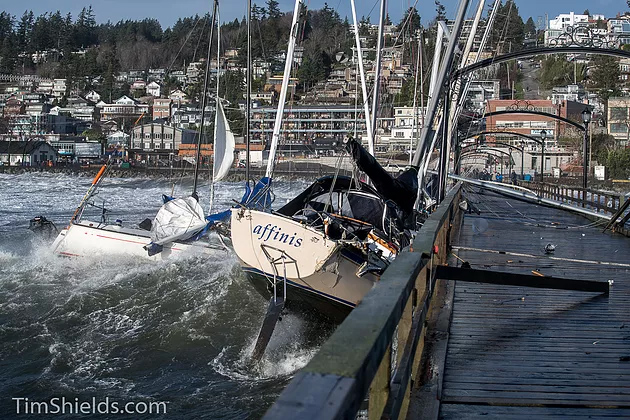 The boats struck the pier and almost immediately two masts came crashing down on the pier deck in a tangle of cables.  The masts and cables were flailing up and down in a dangerous mess.  As soon as the boats came in contact with the pier, the pier deck began pitching and heaving.  We had to make a decision, do we run towards land now and risk having a third mast fall on top of us, or do we wait? 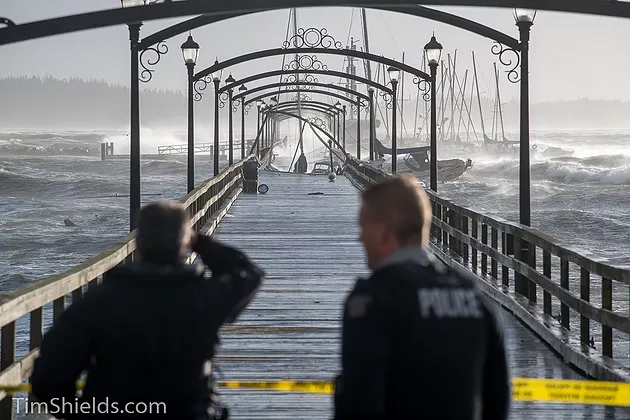 We ran for it.  There were five of us who ran through the fallen masts and tangled cables.  It was a dramatic and scary moment in time.  The pier deck broke up very quickly after we crossed over. 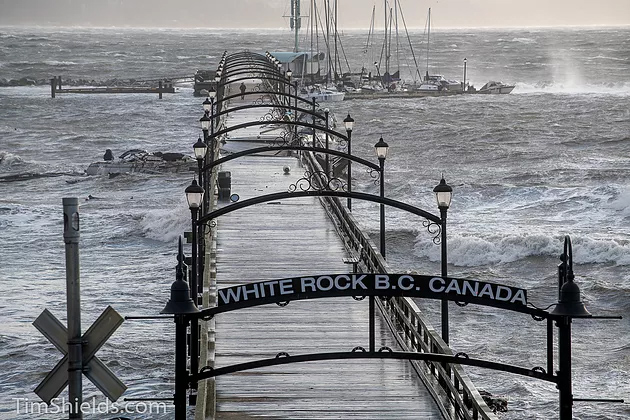 One man who had been alone at the very end of the pier was cut off from land.  He can be seen in this photo standing alone.   The pier has clearly been cut into two parts by the boats. 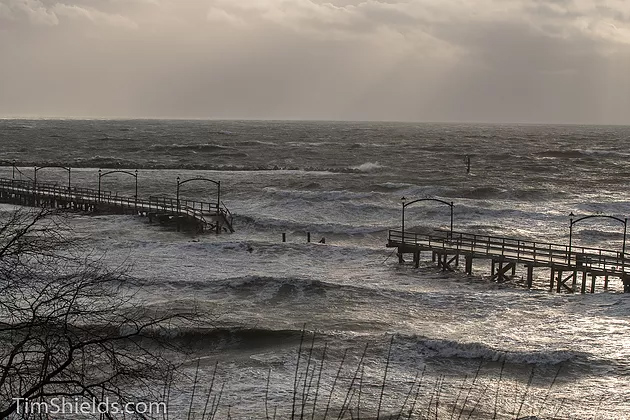 The damage caused by the boats was extensive.  It seemed as if the boats themselves were crushed by the process and all but one of them disappeared.  12 boats … down to just one.   And the stranded man was still at the end of the pier. 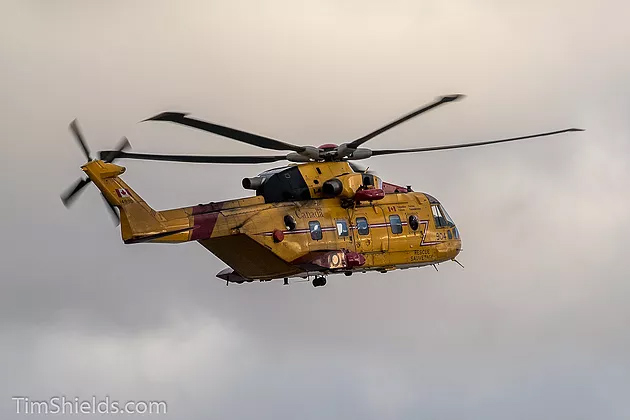 A Canadian Armed Forces search and rescue helicopter was dispatched to the scene from Vancouver Island to rescue the stranded man.

A rescue diver was lowered down to the man, and they were both lifted to safety.  The pier remains closed with no set date to fix it.

The takeaway as a photographer is all about risk assessment.  During situations such as this, or even when crawling around at the top of a canyon or cliff, we photographers need to be conducting a continuous risk assessment.  But the problem is that as people we are often not very good at doing two things well at the same time.  You can either concentrate on taking good photos or concentrate on your risk assessment.  It is very difficult to do both at the same time.  This applies to photography in a windstorm equally as much as it applies to photography while standing at the top of a canyon.  Danger can sneak up on you slowly, or it can hit suddenly.  In my situation it was a bit of both.  Although we cannot foresee every possible eventuality and outcome, we can however continually assess the level of risk we are in and be quick to move yourself out of harm’s way.

Late January 2019 updates:  The Weather Channel from Atlanta, Georgia sent a video crew to the City of White Rock and they gathered my video footage and interviewed me and others.  They will be creating a five minute segment on this event.

The Mayor of White Rock announced on January 24th, 2019 that it will cost up to $16 million to replace the broken pier with a concrete pier structure.  There is no timeline for fixing it.  The pier remains gated off and now White Rock has the appearance of an empty and lonely place…a ghost town.

Robbie Knievel, son of legendary motorcycle stunt man Evel Knievel, has offered to put on a show for the opening ceremony of the pier by jumping it on his motorcycle.  The reception to this idea has been somewhat frosty.  I think it would be an epic event.  Make it happen!

Update January 28, 2019:  I created a new video using the original video footage I shot during the storm.  This video is my firsthand account of how a simple photo walk almost turned deadly.

Believe It Or Not: The 3 Deadly Photography Sins

Police Shut Down A Los Angeles Photo Walk After Mistaking It For A Rave
« Kodak Ektachrome is coming in 120 and large format sheet film this year
You can now access and download 30,000 images from The Cleveland Museum of Art’s collection »