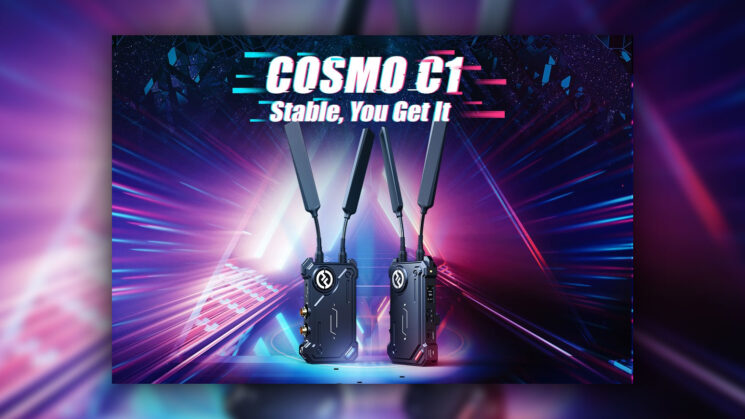 They offer a range of up to 1,000ft at a resolution of 1080p at up to 60 frames per second. Being on the 5.1-5.8Ghz frequency with automatic seamless channel switching, they don’t require a license to operate in most (all?) of the world and have an ultra-low latency of only 40 milliseconds.

The built-in conversion between SDI and HDMI means that you’re able to use your SDI cameras on HDMI monitors or HDMI cameras on SDI monitors. Or you can output into a video switcher like the Feelworld Livepro L1 (review here) or Blackmagic Atem Mini Pro (review here). Alternatively, you can just plug a USB cable in between the receiver and your computer and use it all on its own which you can bring straight into apps like OBS for a live stream or Zoom for showing to a remote client as a regular capture device.

It boasts no dropouts, with boosted signal strength and anti-interference technology to ensure that black frames are a thing of the past. And I can believe it, even with Hollyland’s own slightly more affordable Mars 400S (review here), I’ve yet to experience a single dropout when working within its advertised range. the Cosmo C1 certainly has lower latency than the Mars 400S, though, which comes in at a mere 40ms.

Now, 40ms latency is all well and good, but depending on what you’re shooting, that might still not quite be fast enough for a focus puller to keep up with a fast-moving camera and a fast-moving subject in an action scene, for example. But for most uses, it will likely be more than adequate, and if you do need absolutely instant feedback, well, that’s when you need to start spending real money.

Another area where the Cosmo C1 beats out its Mars siblings is the range. The Mars 300 Pro, Mars 400S and Mars 400S Pro officially max out at around 300-400ft, although I’ve had the Mars 400S as far apart as about 656ft before the signal cut out completely. The Cosmo C1, on the other hand, boasts 1,000ft of range, and that’s likely a safe estimate. I would expect you’d get a little bit more than that. Of course, it will depend on what and how many other signals there are in your area in the 5.1-5.8Ghz range that might interfere. 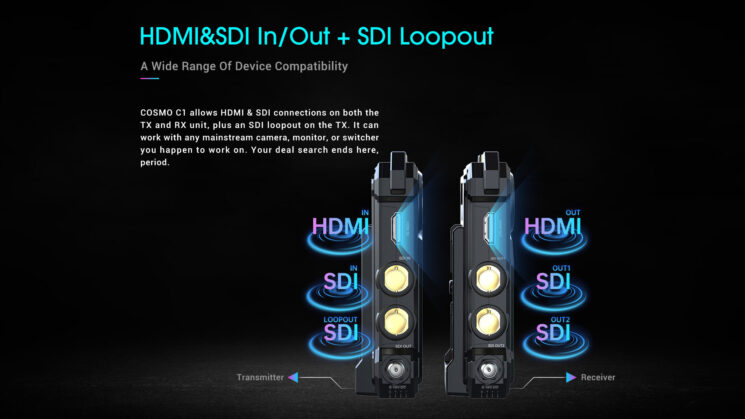 While both the transmitter and receiver contain HDMI and SDI ports and can convert the signal from Tx to Rx, the transmitter only has SDI output for monitoring. So, no matter what kind of signal you’re plugging into it from your camera, if you want to have a field monitor on the camera, too, then you’ll need one that’s SDI. Alternatively, if you have a monitor with HDMI passthrough, you can go from the camera to the monitor and then send the monitor’s output into the Cosmo C1 transmitter, although you are potentially introducing more latency that way. Or, you could use an HDMI splitter to send the camera into both separately.

Ultimately, it looks like an overall impressive system. It’s the entry-level into Hollyland’s higher-end Cosmo ecosystem that offers a lot of range, relatively low latency and some very cool features – like the receiver being seen as a capture device when connected directly to your computer over USB!

The Hollyland Cosmo C1 is available to pre-order now for $899 and is expected to start shipping soon. You can find out more on the Hollyland website.