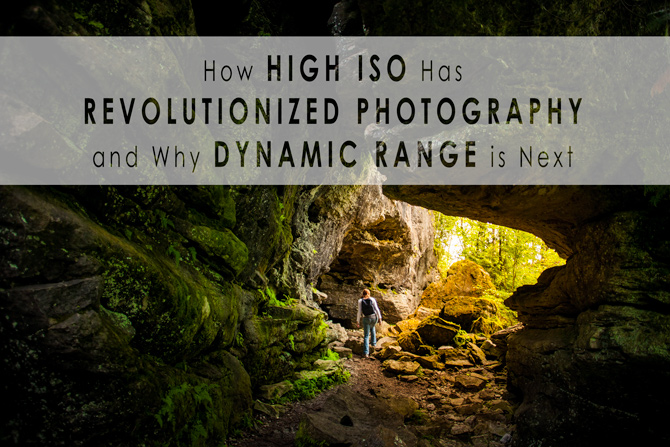 I was recently editing a set of photos for submission to my stock agency, when I realized how much my approach to photography has changed in just the last few years.

I think that this particular series of photos really illustrates how the ability to use high ISO has revolutionized photography in just the last couple of years, and why I think improvements to dynamic range should be the next revolution in photography.

The Canon 5D Mk II, released way back in 2008 (!) was really the first modern camera to unlock the ability to photograph good quality images at high ISO settings.  In fact, all of the photos in this post were taken with a Canon 5D Mk II.

In 2011 the release of the Fuji X series really unlocked the creative potential of high ISO low light photography.  Then in 2012 the Nikon D800 brought high ISO image quality to a whole new level.

Modern low light champs like the Nikon D810 and the Sony Alpha A7 bring unprecedented image quality to extremely low light scenes, and we can expect that future cameras will continue to improve on these high ISO, low light capabilities.

(Unless camera manufacturers get side tracked by offering more megapixels again – don’t get me wrong, I love every single one of my Nikon D800’s 36 megapixels, but I love its image quality more).

To start off, lets (hypothetically) say that you are going for a hike mid-afternoon to go see some caves with your family.  Its a bright, sunny, summer afternoon – but even on bright days open shade shadows can be pretty dark. 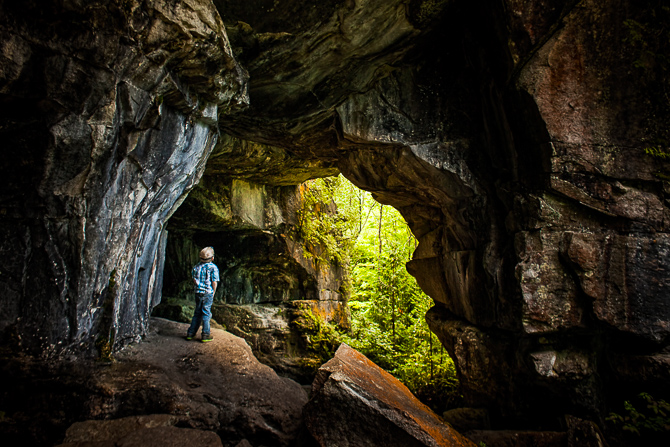 A photo like this is at the limits of what would have been possible with cameras before the Canon 5D Mk II.  I am shooting at 1/60th which is about as slow of a shutter speed that I am comfortable with hand-held, I am using a fast 2.8 prime lens, wide open and ISO 400.

Next we start exploring some of the caves, walking into some of the cracks and crevices at the base of the Niagara Escarpment.  Here we are going from open shade to deep shade. 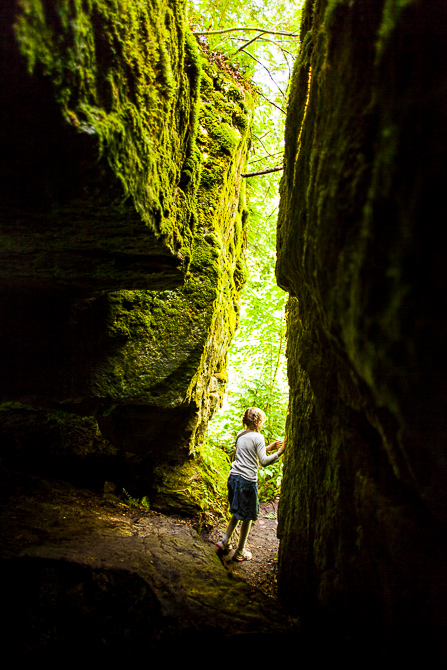 In order to get a decent exposure in the mid-ground on my subject, I had to bump the ISO up to ISO 800.

This is also a perfect example of why improved native (as opposed to faking it with HDR) dynamic range needs to be the next priority for camera manufacturers.  With the exposure I chose, I am severely clipping the highlights in the bright sunny forest and clipping the shadows further in the crevice.  It is a tradeoff that doesn’t exist for a human eye viewing this scene.

Venturing into an actual cave, the only light source is the shaded sunshine at the relatively small mouth of the cave. 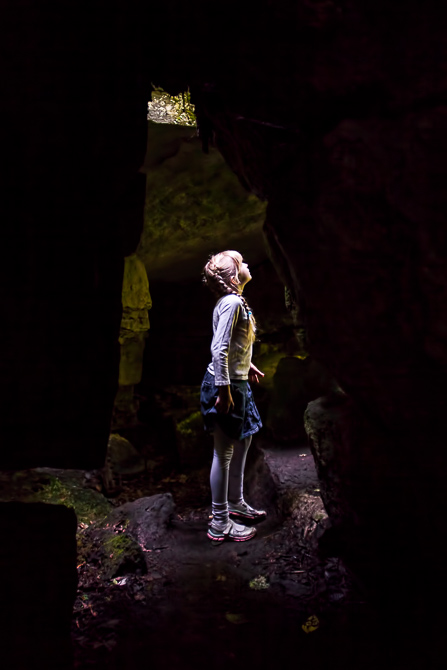 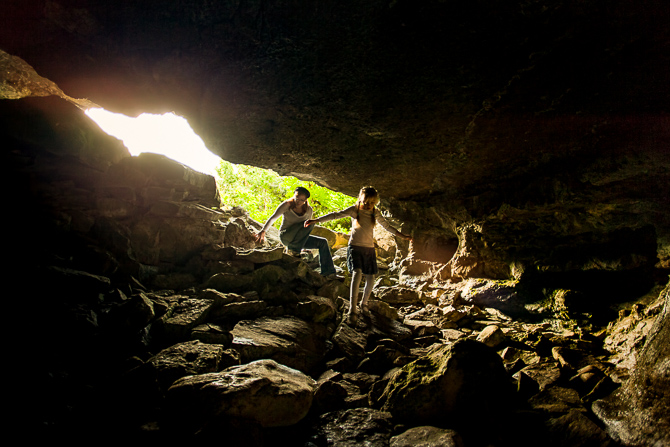 I didn’t want to shoot hand-held with a shutter speed slower than 1/60th and f/2.8 was as big as my lens would go, so the only option to get the exposure I wanted was to go to ISO 1600.

Prior to today’s modern high ISO capabilities, I could have probably still made this shot work by using a tripod and a shutter speed of 1/15th, f/2.8 ISO 400 and telling my subjects to freeze during the exposure – but I would have been in the motion blur danger zone and this would have meant posing my scenes instead of capturing live action.

Moving even deeper into the cave system, I am in the dark (literally) with the only light coming from our flashlights and headlamps. 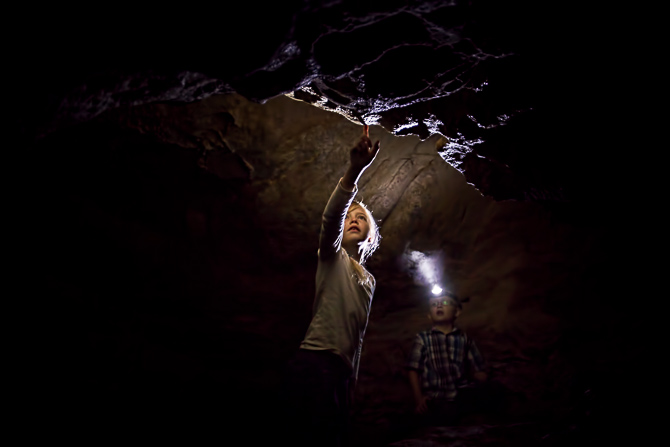 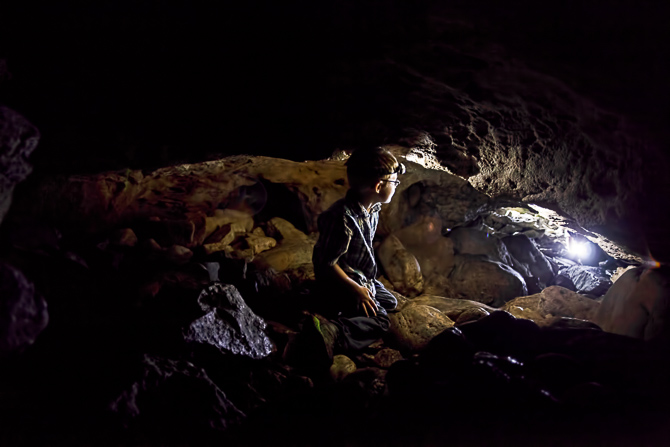 I could have used about another 3/4 of a stop of light in these shots – but with the older Canon 5D Mk II I decided that I would probably get better quality results from brightening an ISO 1600 photo up by 3/4 of a stop in post, versus having to deal with the sensor noise from an ISO 3200 image capture.

The only way I could have pulled off these images without resorting to a high ISO would have been to resort to using strobes to mimic the beams from our flashlights.  Using strobes would have resulted in very high quality images, much better than shooting ambient at high ISO – but aside from the logistics of packing multiple strobes, triggers and light stands for a family day hike – setting up multiple strobes and triggers while crawling around in a cave isn’t exactly the same as setting up a studio portrait.

In the final photo, I am as far into the cave system as my slightly overweight body will fit – I told the dude if he went any further he was on his own (he went about 10 feet past this point before he got scared and came back – this is his nuts-to-you-because-I’m-literally-out-of-the-reach-of-your-fat-ass face). 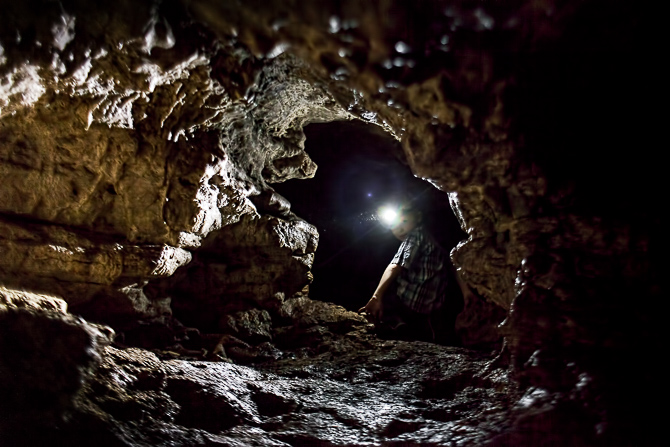 The only light in this final photo is from the little LED headlamp on my son’s head.  I switched to a 28mm f/1.8 lens to get a little more light from a slightly larger aperture, and I went down to a shutter speed of 1/30th by resting my elbows on the ground – but really its the ISO 1600 that makes this photo possible.

When you stop to think about it, its just so amazing that you can take a photo like this, hand-held in nearly complete darkness and produce an image that is pretty close to how the scene looked to my eyes.

Which brings me back to what I see as the final frontier for digital camera image quality (and it ain’t megapixels):

If there is one thing that low light images like the ones in this post are lacking out of camera, it is a dynamic range that is remotely similar to what humans can see to the naked eye.

We can fake it in post to a certain extent – the shadows slider in Lightroom can do some pretty amazing things – but now that our cameras can practically see in the dark, if would be nice if what they saw had the dynamic range we can see by eye (or better!).

Has the ability to capture high quality images at very low light levels changed your approach to photography?

Is high ISO just a crutch that helps fauxtographers make due with ambient light and avoid learning how to use artificial light?

Would you like to see camera manufacturers pay more attention to increasing the native dynamic range of their cameras?

How to Find the Best ISO for Astrophotography: Dynamic Range and Noise