The phrase “dual native ISO” seems to be coming to more and more cameras these days. Certainly not to all of them, but to many, especially when it comes to video. Panasonic’s done it with the GH5S, Blackmagic’s done it with the Pocket Cinema Camera 4K, and it’s out there on a few more, too.

But what exactly is it? I mean, we get what the end result is, but how does it work? What is this voodoo? And how does it really affect how we shoot? John Hess from Filmmaker IQ dives deep into dual ISO and the effect it has on dynamic range with the BMPCC4K in this video, and it’s probably the best explanation I’ve seen so far on how it all works.

I’m not even going to try to explain it fully here, because John does a much better job of it in the video better than I ever could. But, essentially, the way ISO works in a standard single “native” system, is that between the sensor and the processor is an analogue circuit. This circuit amplifies the signal coming straight from the sensor before it goes into the analogue to digital converter. Then, digital gain is applied (anything higher than your “native” ISO) before being recorded out. In a regular camera, everything goes through this one circuit. 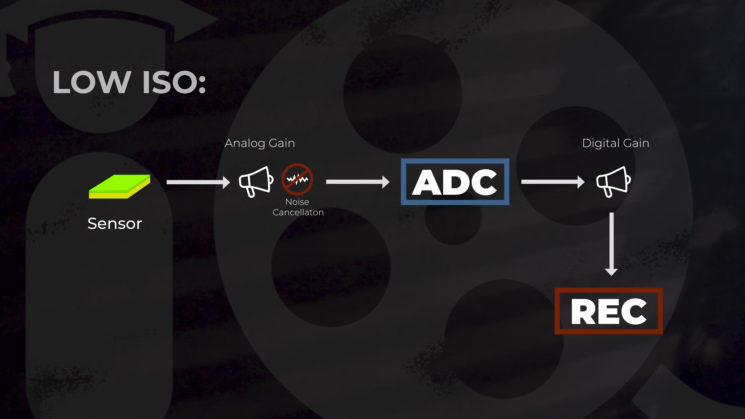 In a “dual native ISO” camera (and he has a problem with that phrase – which he also explains in the video), there are two such circuits, designed to process this signal from the sensor differently. When you’re at a low ISO, this signal goes through one circuit, and once you reach a certain ISO it goes through another, more powerful, circuit instead. And then the signal gets passed along from either of these circuits to the analogue to digital converter, and then digital gain is applied. 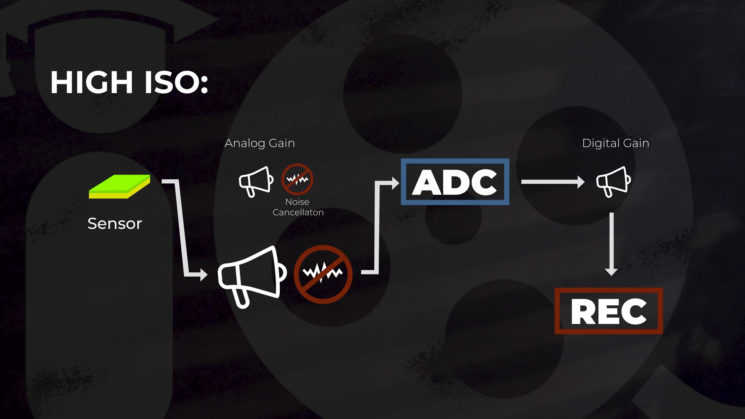 In the case of the BMPCC4K, when your ISO is between 100-1000, it goes through the “low” ISO circuit, and the ISO is adjusted digitally after the processor. Once your ISO goes up past 1250, it goes through the second circuit, and there’s a noticeable increase in image quality once it does so, because the original source signal is being boosted instead of the digitally compressed signal.

John also talks about some quirks with the way the dynamic range works in the camera at different ISOs, too. While the actual overall dynamic range doesn’t change from ISO100 all the way up to ISO6400, the middle grey point of the footage does, and shooting at higher ISOs, while introducing some noise, can actually increase perceived dynamic range in the highlights. But only up until that point where it switches from the low ISO circuit to the high ISO circuit. Then it drops again before slowly reclimbing.

He does note that these tests only apply to the Blackmagic Pocket Cinema Camera 4K, as that’s what he was testing with, and he uses his previous dynamic range test kit to check it out. So, if you’ve got a dual ISO camera, you’ll want to do all of these tests for yourself to find out what qualities each part of your ISO range has so that you can choose the best ISO for whatever you’re shooting at the time.

It’s a very interesting video, and one I’m probably going to have to watch at least twice more before I fully understand the implications of everything John is describing. But I’m looking forward to trying these tests for myself when I finally get my hands on a BMPCC4K.

How to Find the Best ISO for Astrophotography: Dynamic Range and Noise

This is everything you wanted to know about dynamic range

« This epic 81-megapixel moon photo was stacked from 50,000 images
The new Panasonic S1 might just be the new low light video king »