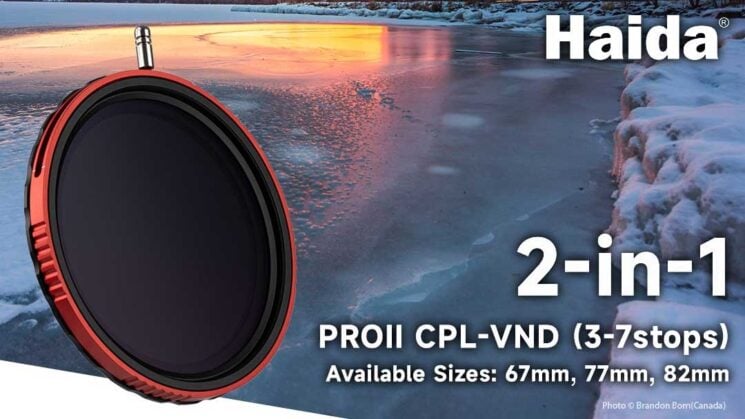 There are one or two filters on the market to overcome this, that allow you to rotate the polarisation independent of the overall exposure. And now there’s another one, as Haida has announced its new PROII CPL-VND 2-in-1 filter with 3-7 stops of variable ND stopping power along with a handle that lets you rotate the polarization while maintaining your level of neutral density.

The lack of ability to rotate a variable ND filter is the main reason many don’t use them, preferring instead to go with a separate polarising filter along with fixed value neutral density filters – especially filmmakers using matte boxes and landscape photographers that can take their time to deal with multiple filters. But for those in a rush or just want the convenience of having both in one, it’s a fantastic idea. 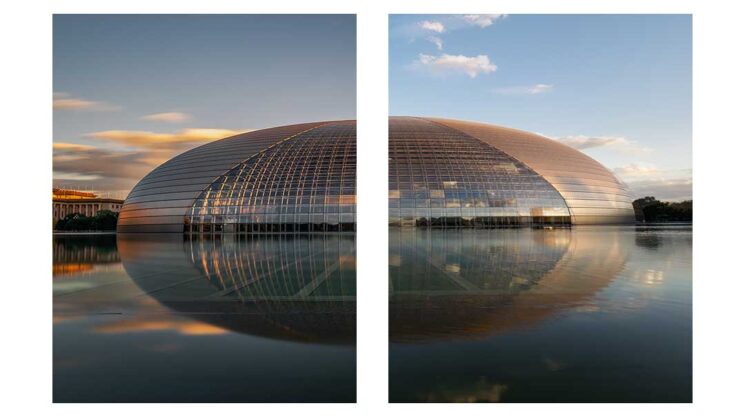 An example Haida published illustrates the potential difference between the PROII CPL+VND (left) vs a standard VND (right) where you don’t have control over polarisation.

And Haida is targeting the PROII CPL-VND towards both photographers and filmmakers to let them quickly and easily darken down the light entering their lens as well as gain control over reflections and skies in a single screw-on package. This makes it particularly well suited to things like vlogging or behind-the-scenes cameras where you don’t want to have to spend all your time fiddling around with filters.

It’s available in 67mm, 77mm and 82mm diameters and allows you to reduce the incoming light from 3 to 7 stops. Haida says that it doesn’t suffer from the X problem commonly associated with VND filters, which is likely due to the hard stops at each end that limit the overall travel of rotation. This stops it from ever entering the territory where such artifacts appear. Of course, you’ll still face the same challenges on ultrawide lenses that you would with a regular polarising filter or a standard VND.

There doesn’t appear to be any word on a price yet, but keep an eye out on Haida’s Amazon store and it should appear soon. We’ll update this article when it does. For now, you can find out more about the Haida PROII filter range on the Haida website.

« Don’t spend a fortune on backgrounds, here are 3 ideas to make your own
Samsung’s new ISOCELL HP3 200MP camera sensor boasts the “industry’s smallest ever pixels” »