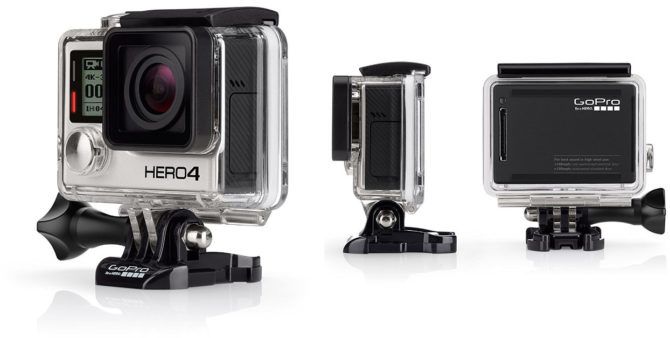 GoPro, like many companies, tends to keep pretty quiet when it comes to new products, letting very little out until an official announcement is ready to be made.  Official news, therefore, on the GoPro Hero5 is pretty much non-existent, although the rumours and speculation are plentiful.

GoPro CEO, Nick Woodman recently told Christian Times that they will “definitely release three new devices before the year ends”, but he did not specify what these products would be, or when they would be getting released.

The GoPro Hero4 Black has been a wildly popular camera, just like its predecessors, but it’s starting to feel a little pain from some of the competition now. The recently released Yi 4K, for example at around half the cost actually beats it in some areas, like the built in touch screen LCD and much longer battery life.

This combined with DJI stomping all over GoPro’s entry into the drone world and GoPro’s share price at a fraction of what it was a year ago, they’re going to have to produce something pretty amazing if they want to reassert themselves as the dominant leader in the action camera market again.

So, let’s have a look at the rumour mill and see what they’re saying about the possible Hero5.

Since DJI released the Phantom 4 boasting many of the same features the Karma was epxected to have, GoPro decided to temporarily pull the plug. the delay was put down to the drone simply being not ready, but I have a feeling they had a bit of a rethink after the Phantom 4 was released to try and beef it up a bit more.

The delayed Karma drone bundle is now expected to be shipping with the Hero5, and we should see it arrive around October.

China Topix reported that the GoPro Hero5 is expected to shoot 8K videos at 60fps. This would be a hell of a feat, if true, although if it can indeed shoot 8K video, I’m not getting my hopes up on that framerate. 1080p @ 240fps would be nice, though.

8K also seems a little premature at the moment, given that 4K has still barely taken off. I know you need to plan ahead for the future, but is anybody really going to use it? Are there any microSD cards out there even fast enough to handle the kind of bitrate 8K would demand if you want any kind of real quality?

This one’s an interesting one. The Hero5 is expected to feature some kind of dual lens technology, and it’s been speculated that the Hero5 will be able to shoot 4K 3D video.

This would be extremely cool, although I’m not entirely sure it would be possible. Given how close the lenses would have to be on a body expected to be smaller than the current Hero4, I wouldn’t think there would be enough distance between the two lenses to give any real sense of perspective.

Perhaps it’s simply looking at dual lens technology as a way to increase image quality, similar to that seen with the recently launched dual lens cellphones.

It’s expected that GoPro will be bumping the battery up to a massive 2,800mAh, which should dramatically increase the amount of time you can record between recharges.

With the Yi 4K already getting around 2 hours out of a 1400mAh battery, compared to the Hero4 Black’s hour or so, it’ll be interesting to see how this compares with different hardware.  Hopefully GoPro will be introducing some of the newer, far more efficient chips that others are already implementing.

The Hero5 is also expected to include Bluetooth 4.0 to speed up wireless transfers to mobile devices.

While there’s been no mention of LCDs in any of the articles or posts I’ve read, I’m wondering what GoPro will do with regard to an LCD screen.  The backpack is kind of clunky, and while often unnecessary an LCD screen has kind of started to become standard amongst competitors.

Again, the Yi 4K has the Hero4 Black beat with a built in 2.19″ touchscreen LCD, that looks great and is very responsive. Even the lower end action cameras are incorporating screens into the back now, even if not touchscreen ones, and it won’t be long before it’s simply expected.

Perhaps this is why they’re bumping the battery up to 2800mAh.  An LCD screen, along with a second lens and sensor is no doubt going to drive up battery consumption quite quickly.

Of course, these are all rumours, so take them as you will, but with with three products said to be launched this year, with GoPro’s relatively limited lineup and the ever fierce competition in the action camera market, it seems extremely unlikely that we won’t see the Hero5 launched at some point this year.

It’ll have to pack a hell of a punch to make it worth the cost, which is expected to be around the same $500-600 price point where the Hero4 Black currently resides.

So, Do you still think there’s some life in the old dog yet? or are you eagerly anticipating a Hero5 announcement? What rumours do you believe? What do you want to see in a Hero5 that hasn’t been speculated on yet? Let us know your thoughts in the comments.

Thanks to Xiaomi, the GoPro Hero5 Should be Amazing

« Samyang’s new lens doesn’t have autofocus – It’s a 135mm T2.2 cinema lens
Is a full frame camera really worth it? »