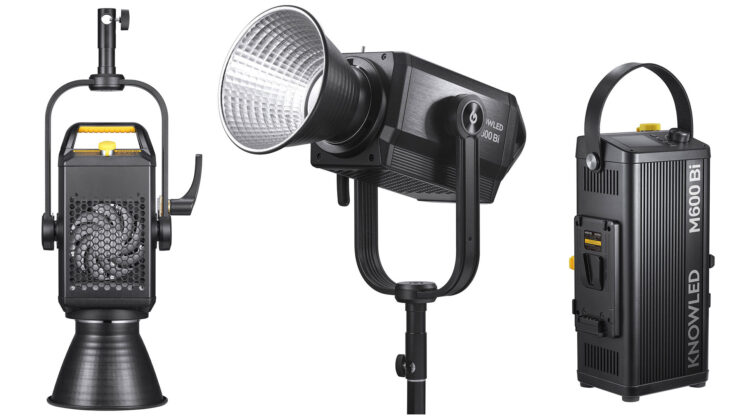 Godox has announced the new Godox Knowled M600Bi, a bi-colour version of the Godox Knowled M600D announced last November. Designed for studio, film and TV production, the powerful bi-colour LED light has a temperature range of 2800-6500K, runs of AC or V-Mount battery and features radio, DMX and Bluetooth wireless control. It also has fanless to minimise the impact it has on audio during recording.

It has a CRI of 96 and a TLCI of 97 with 4 dimming curves and 21 (or 7?) lighting effects. On the front is the familiar Bowens mount, so you can use it with all of the Bowens modifiers you already own. When on AC power, it runs on 100-220v AC meaning you can use it just about anywhere in the world.

On the outside, the new light looks pretty much identical to the daylight-only Godox M600D, save for the writing printed on it and the colour of some of the port covers. Godox hasn’t added the new product to their website yet, although they have posted the video above to YouTube and a listing has appeared on the B&H website, although there isn’t much information beyond the basic specs.

The video shows us what it looks like and gives us some idea of scale, how to wire it all up for power and some general operation information, but beyond that, it doesn’t tell us a whole lot that the B&H listing doesn’t currently tell us. It does tell us some things, though – some of which seem to be at odds with what B&H says. For example, the B&H listing says that there are 21 lighting effects, although the Godox video says there are 7, including Flash, Lightning, Broken Bulb, TV, Candle, Fire and Firework. Perhaps there are multiple variations on each, however, that total up to 21.

We can also see in the video that it’s compatible with the GodoxLight mobile app for iOS and Android, although it’s not much of a surprise that it does. It’s pretty much to be expected, really.

The Godox Knowled M600Bi bi-colour LED light is available to pre-order now for $1,599 – which is only $100 more than the daylight version. No word yet on exactly when the M600Bi will begin shipping, but if you want to find out more about it, keep checking back on the Godox website. I’m sure they’ll add the listing for it eventually.