It is not secret that to get a good shot photographers sometimes endure extreme conditions.

To get s good shot or a good story National Geographic photographers sometimes spend months in freezing Ice or blazing Deserts to get the right shot.

I doubt though that any of them had the experience of getting shagged by a Kakapo parrot to get a shot. 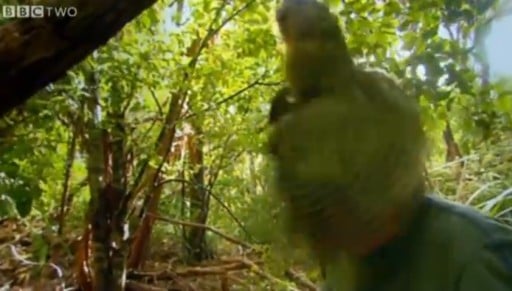 Actor Stephen Fry and zoologist Mark Carwardine roam the world documenting endangered species as part of the BBC’s Last Chance to See series. Mark have had the luck to be one of the first photographers to have such a sexual encounter with a Kakapo parrot.

Apparently the parrot, got a bit lonely and tried (and managed) to shag Mark Carwardine while he was taking its pictures.

Wikipedia has some interesting facts about the bird:

The parrot was not heart during the act, though Mark Carwardine was scratched to blood.

Paralympics workflow: How the official Australian team photographer is getting the shot