The sensor size debate is one that will probably never end. It’s just too polarising of an argument. On the one side, you’ve got the “Full frame = king!” lot, and on the other, you’ve got “Nope, doesn’t make a bit of difference”. Two extremes. The truth, however, is somewhere in the middle, if you look at things objectively.

There are definitely benefits and drawbacks to differently sized sensors, but there are also many situations where it really doesn’t matter. In this video, Marc Newton at The School of Photography takes an objective look at cameras with three different sizes of sensor – 35mm full-frame, Canon’s 1.6x crop APS-C and Micro Four thirds to see which might best suit your needs. 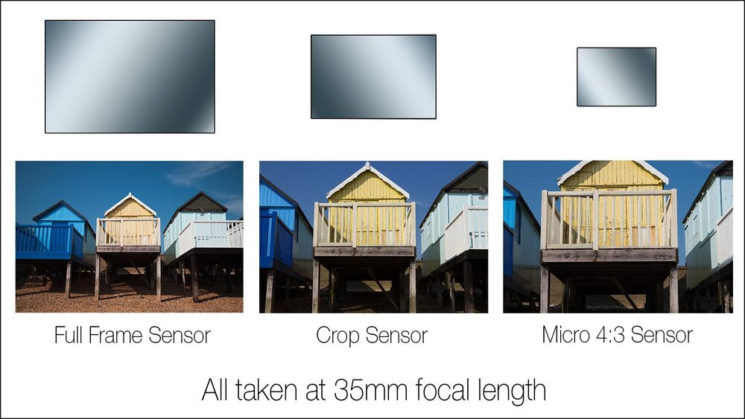 In the video, Marc compares three cameras with three different sizes of sensor. The full-frame Canon 5D Mark IV, the 1.6x crop APS-C Canon 1200D, and the 2x crop Micro Four Thirds Olympus OM-D E-M1 Mark II. To add to the confusion, Canon’s 1.6x crop isn’t the standard for APS-C sensor sizes. It’s actually a little smaller than most. Every other manufacturer (Nikon, Sony, Fuji, etc) uses slightly larger 1.5x crop sensors in their APS-C cameras, although it makes little difference in practical terms (although there is still some).

We’re shown various examples of how a different sized sensor affects the field of view of a given focal length, adjustments we might have to make as a consequence of the differently sized sensors, and the consequences we may face as a result of those adjustments. 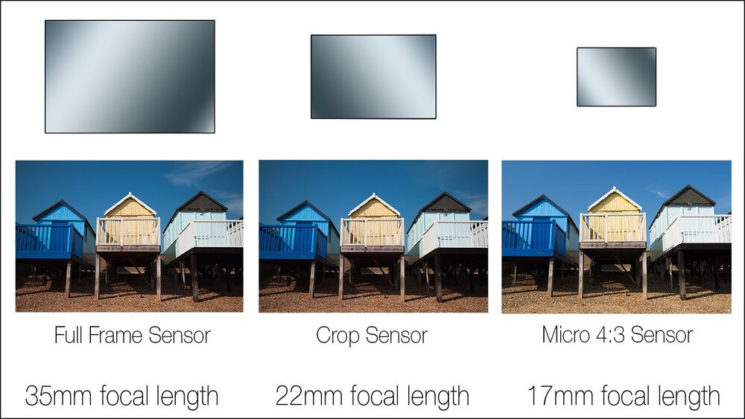 There’s a post on The School of Photography website to go along with the video, although I don’t necessarily agree with every statement made. For example, “A bigger sensor has bigger pixels which means each pixel can capture more light and this creates less noise at higher ISOs”.

Let’s take a look at the full-frame Canon 5DS, which is a 50-megapixel camera. That means it has a pixel size of 4.1 microns. The Nikon D7000 is a 16-megapixel 1.5x crop APS-C sensor, with a pixel size of 4.7 microns. That means this crop body actually has bigger pixels than the full-frame 5DS. The sensor size alone does not determine the size of the pixels on the sensor.

You have to take the resolution into account, too. Pixel size is a combination of the two.

Even though in the example cited above, the D7000 sensor has larger pixels than the Canon 5DS, it’s not as good at higher ISO. Advancements in sensor technology play at least as significant a part as the size of the sensor or the size of the pixels. And not just advancements in technology, but the amount of it that the manufacturer invests into higher-end (usually full-frame) bodies.

Ok, an unfair comparison, perhaps. The D4 & D4s are next-generation bodies vs the D700, but what about the D700 vs the D3s? Those are both the same generation, both 12-megapixels, with the exact same size of pixels on the sensor, yet the D3s wipes the floor with the D700 when it comes to ISO performance, and was the low-light king of all DSLRs for quite a long time.

You can see why this is a hotly debated topic, huh?

Still, there is some great info in the video, and lots of things for you to chew over and research to see how it affects you and your own photography. And be sure to head over to The School of Photography website to read the full post to go along with the video.

For me, I shoot all three (four?) formats. Micro Four Thirds, Canon 1.6x & everybody else’s 1.5x APS-C, as well as full-frame. Most of the time, the body I choose is simply a matter of convenience and due to the features available in one specific body over another. The size of the sensor is the least of my concerns.

What do you shoot with? Does sensor size make a difference to you? Why or why not?

Comparing sensor sizes from Medium Format to Micro Four Thirds – Can you tell the difference?

« Step up in privacy takeover: This CCTV camera says it can detect coronavirus carriers
Nisi unveils a 5 to 9 stops variable ND filter »