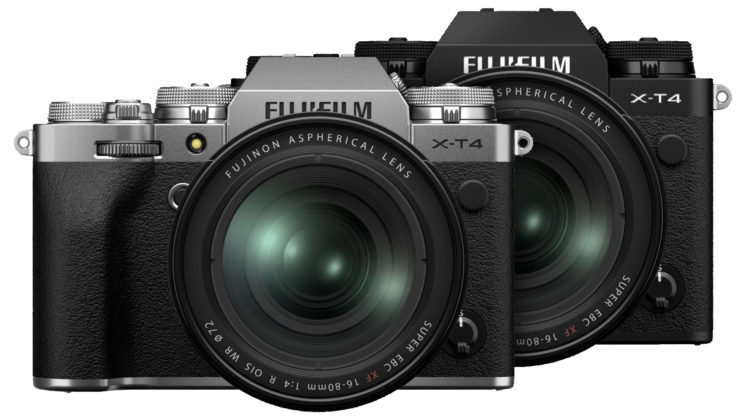 It seems somewhat redundant at this point, given that we’ve all seen the photos and the specs already, but Fujifilm has now officially announced the Fujifilm X-T4 APS-C mirrorless camera.

The final specs are pretty much as the leaks suggested. It features a 26.1-megapixel APS-C X-Trans BSCI CMOS sensor, 5-axis In-body image stabilisation, up to 15fps continuous shooting with the mechanical shutter and offers 4K DCI/UHD video at up to 60fps and 1080p at an impressive 240fps.

Some things the spec sheet doesn’t tell you are that the Fujifilm X-T4 has received an updated design which they say is to help offer improved handling and shooting efficiency. The new 3.0″ 1.62m-dot touchscreen LCD is also a fully articulated flippy out display (similar to those found on most Canon bodies, the Panasonic GH5 and the Nikon D5x00 series).

The Fujifilm X-T4 also features a new NP-W235 rechargeable lithium-ion battery. This gives you about 50% more capacity over the NP-W126S used in the X-T3, which Fuji says should give you an extra 500-600 shots per charge. Built-in Wi-Fi and Bluetooth also allows for remote camera control and sharing through a mobile device.

For video, you get 4K DCI/UHD internal recording at up to 60fps and 1080p at up to a very impressive 240fps. The built-in micro HDMI port offers 10-Bit 4:2:2 output which can be captured through an external recorder like the Atomos Ninja V. Although the X-T3 could also do 4K UHD at 60fps, it could only do 4K DCI at 30fps, and 1080p was only capable of 120fps.

While the resolution hasn’t increased over the Fujifilm X-T3, it looks like a fairly decent successor, overall. Whether it’ll be worth upgrading for existing X-T3 owners depends on how happy you are with your X-T3, but for new users, it will likely be worth going for the X-T4.

The Fujifilm X-T4 is available to pre-order now for $1,699 and is scheduled to begin shipping at the end of April. However, Fuji Rumors reports that due to the Coronavirus outbreak, supply may be limited for a while.