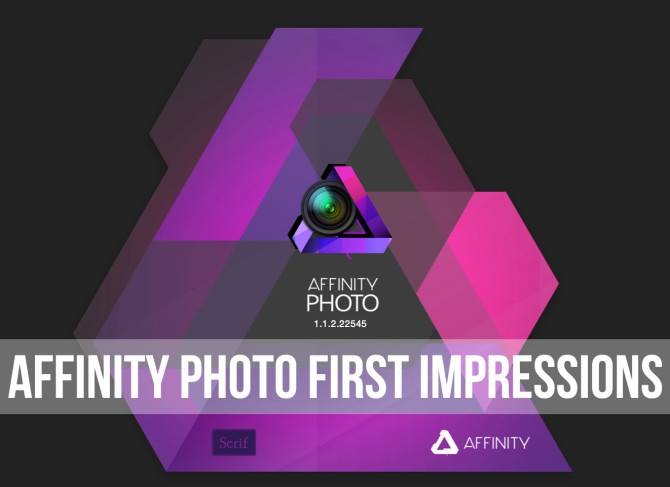 Following up on the yesterday’s post about a possible Photoshop alternative in the works, named Affinity Photo (which is currently in Beta, and the Beta is free for download).

Calling an application an alternative to Photoshop is no small thing. Photoshop has been an industry standard for years, and has built up an enormous user base in almost every field of digital image creation.

I’ve been running Affinity Photo for a few hours now, seeing where it goes and how it holds up. Now keep in mind this is Beta software, so not everything works just yet or as it should be. But working with the software can certainly give a direction on where it is going.

First thing I noticed is that it doesn’t support my RAW files from Olympus. Nikon and Canon had no problem loading into the Develop Persona part of Affinity Photo. (I did have to convert my RAWs to DNGs, but that worked fine).

From within Develop Persona we are presented with a Camera Raw-ish slider set for exposure, contrast, temperature,  the usual suspects. The sliders range from 0% to -100% and 100% and are too harsh in my opinion. Just sliding up 1 or 2% already gives a big change, so fine tweaking is out of the question. I also noticed the loaded DNG looks already auto adjusted compared to loading in Camera RAW. All in all it needs work, but when loading an image into Develop Persona, a notice pops up stating the Develop Persona area is in active development, so there is room for improvement. 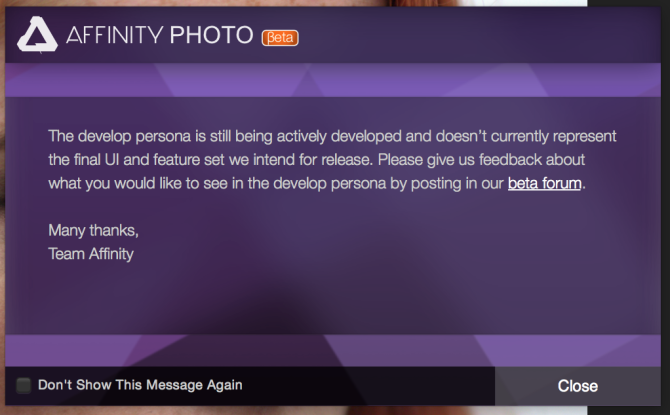 Remember this is Beta

Once you commit the image with all the first tweaks you’re presented with the Photo Persona, where all the photo editing will happen. It feels familiar yet unfamiliar. Tools and buttons are where you expect them to be, and it’s easy to find the function or buttons you need. There’s layers, adjustment layers, toolboxes. It’s all very Photoshop like. Tools are represented by colorful icons and are easily identified, hovering over a tool will display familiar names as well. 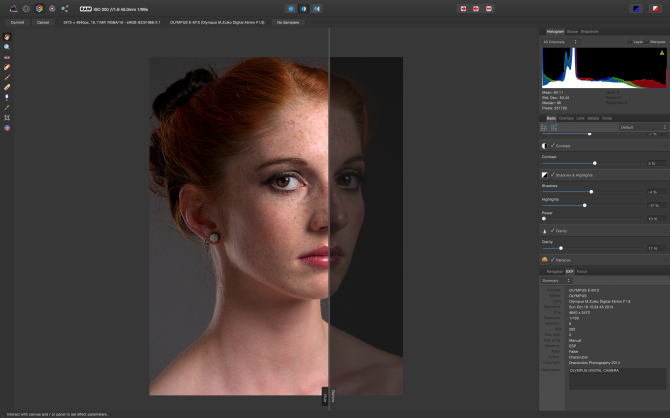 RAW file editing with a nice spilt view of before and after. The before is however not accurate.

The Adjustment Layers panel gives a small preview and different variations of the effect, which is a nice touch. The toolbox holds all the tools we’re used to have. There’s crop, fill, magic wand, clone stamp etc.

There’s also a tool called Inpainting Brush…it’s magic. It’s like the clone stamp tool combined with the healing brush and the spot healing brush in one. Not quite sure how it works, but it removes blemishes and spots and fills it in. Most of the times I hardly noticed any distortion, and it worked really well on stray hairs too. It had a hit ratio of 9 out of 10 I guess. 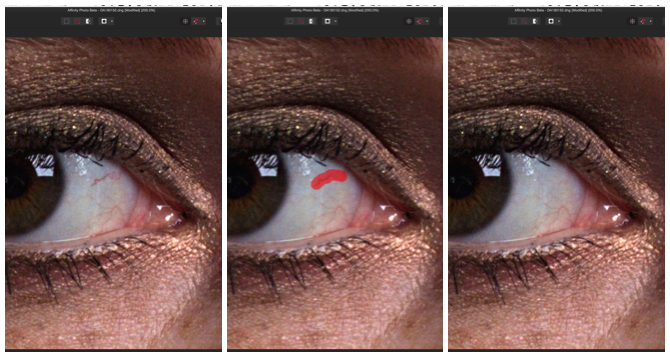 There is a filter list, which again has all the usual filters, and you even have the option to point the program to your Photoshop plug-ins which should work. I tried my Nik Tools, and they loaded in demo mode. It did have some issues loading the image in the plugin, but, well,  this is why it is called a beta.  I assume this will work fine in the final version and is a happy find. Some spend thousands of $$$ on plugins, so it is good to know you won’t have to throw that money away

There is a Frequency Separation tool/filter which is a helper tool to setup a FS layer stack for you to work with. Intuitive, but it crashed the program on two occasions. 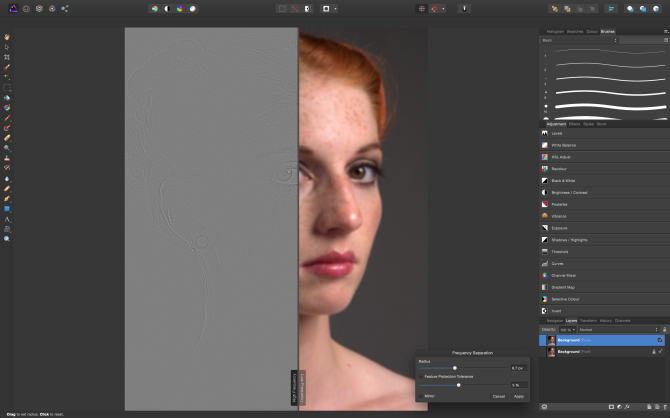 Brushes are just are the same as in Photoshop, and sadly it doesn’t import .ABR files, which would be the smart thing to do. So all your collected brushes are useless until they develop a conversion of sorts. I couldn’t find any fancy new cool brush functions.

Liquify has its own Persona, and is what you expect it to be. Next to that there’s also a Macro Persona, which is also in development, but uses a LUT (LookUpTable) style workflow for making color corrections. Basically it now just shows you different color variations you can apply as an adjustment layer to your photo. 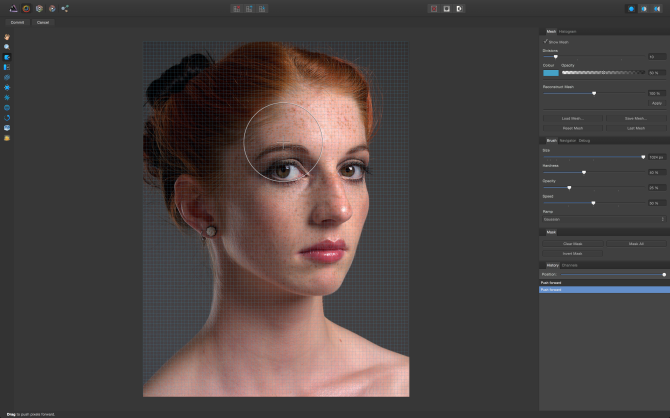 The Liquify Module has its own space and is very responsive 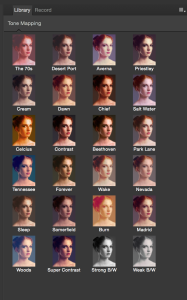 Like I said I’ve only tried the application for a few hours before writing this so I can only give a quick review of what I found.

I don’t know if this application will hold its own against Photoshop, it would need a large user base to grow and provide it with its own ecosystem which Adobe already has. I doubt people are willing to make the switch and learn a new workflow. It’s not that the program doesn’t have potential, but for now it lacks integration with outside applications, an established user base and some really killer tools. Most tools are either already inside Photoshop or available as a neat plugins (like for example the Retouching Toolkit by Conny Wallstrom) If you’re used to Photoshop you’ll stick with Photoshop as everything else will feel cumbersome, but if you’re new to digital image creation this would be a nice alternative, especially for its low price (the Beta is free, and its estimated to cost $49)

Mind you, Adobe would be wise to look into this application as it addresses some features Photoshop is lacking and addresses them well!!

Here are over 100 Photoshop plugins